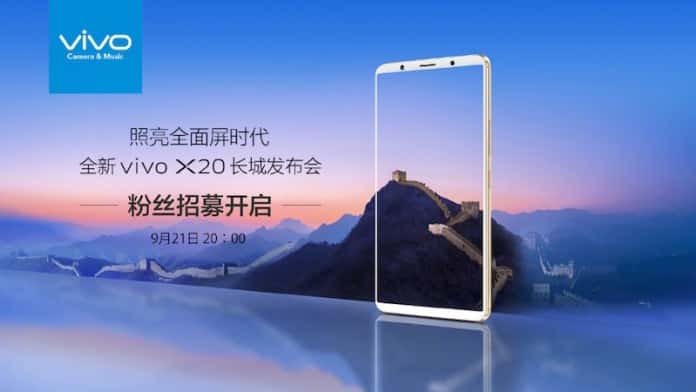 The mysterious Vivo X20 has now been set for an official unveiling which will take place on the 21st of September, according to new promotional materials recently published by the Chinese smartphone maker on Weibo. As expected after a handful of leaks and rumors, the device will carry a ‘full-screen’ display following the current trend on the premium market, though not many other details about its internal hardware have been revealed.

Judging by past reports, the upcoming Vivo X20 should be equipped with a 5.2-inch display featuring an 18:9 aspect ratio and a resolution of 2,160 x 1,080, while other reports hint at a 5.8-inch panel instead. Additionally, the device should make use of the 64-bit Qualcomm Snapdragon 660 chipset, featuring a total of eight Kryo 260 cores operating in a big.LITTLE configuration, as well as the Adreno 512 graphics chip. The smartphone is said to carry 6GB of RAM and 64GB of on-board memory, but whether or not the storage will be expandable via a microSD card is unknown. The smartphone’s back panel should accommodate a dual 24-megapixel camera, while a similar sensor with the same resolution is likely to reside on its front panel. The front-facing unit will supposedly support some kind of a facial recognition technology, which will reportedly allow users to unlock the smartphone in as little as 0.1 seconds by simply looking at it. A similar solution has recently been employed by Samsung to unlock the Galaxy Note 8 and is expected to replace the fingerprint sensor in the upcoming Apple iPhone.

Lastly, the Vivo X20 will reportedly be powered by a 3,500mAh battery and should run Android 7.1.1 Nougat out of the box. Previous rumors also hinted at the possibility of a second variant being in the works, called the Vivo X20 Plus, but the official teaser materials at hand seem to be focusing solely on the Vivo X20. Whatever the case may be with the company’s immediate plans in the mobile market, more details on the X20 are likely to emerge in the coming days, possibly even before the September 21 event takes place. 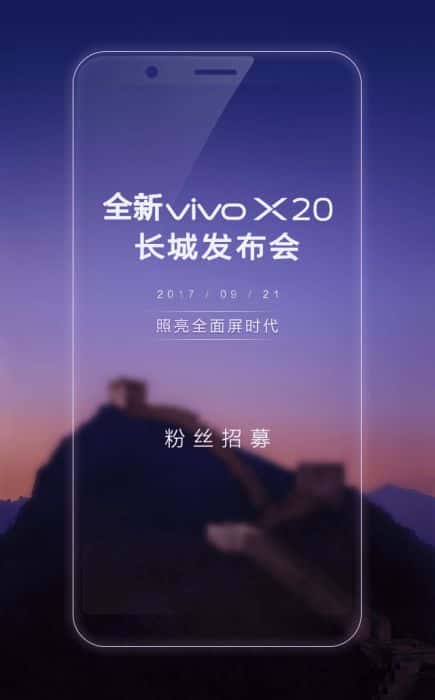