Google is sending out mailers to Microsoft Azure partners in an attempt to get them to switch to Google’s products and services, according to a report from The Petri IT Knowledgebase. The site received the attached images, which depict a parcel that has been reportedly showing up on Microsoft partners’ doorsteps. This package, decorated in Google’s Material Design conventions and a lighthearted color scheme, contains a few flash cards with quick testimonials from Google partners about the services that they’re taking advantage of, and a black Chromebook case, along with an offer for a free Chromebook. All the Microsoft partner has to do to get the free laptop is agree to chat with a Googler about the possibility of making the switch to Google’s services, including deploying Chromebooks, and using Google Cloud Platform and G Suite.

There is no indication thus far of exactly what Chromebook is being offered for free, and since reports have only recently started surfacing to publicly available sources, there is no way of knowing exactly how long Google has been employing this tactic. According to various partners, Google’s efforts are not limited to large partners, nor are they limited to the US; one commenter, who declined to name their organization, said that they had received such a solicitation package and had decided to go through the steps to obtain the free Chromebook. This particular commenter is in the area of Toronto, Canada, but as of this writing, no other Microsoft partners from outside the US have come forward to confirm receiving a package from Google.

Google has been pushing hard lately to get into every crevice of the enterprise space, following a successful push into the education sector and increasing popularity of Chromebooks and the Google services on them among consumers in many regions. The company has been making improvements to its G Suite services, and working on improving Google Cloud Platform while putting out initiatives like free trials and other developer advocacy tactics. This latest move is a fairly bold grab at users of a rival ecosystem, and goes to show that Google is not content to have Google Cloud Platform sit in third place behind Microsoft Azure and Amazon Web Services. 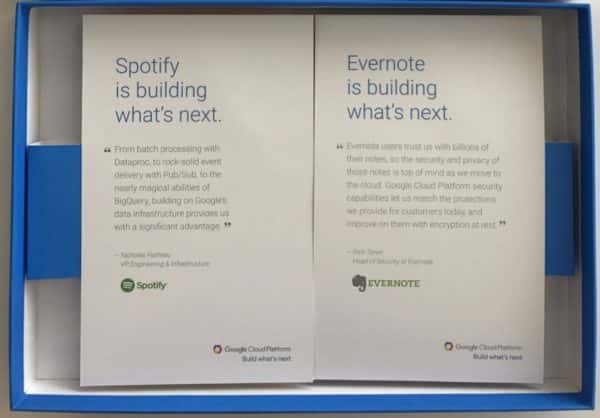