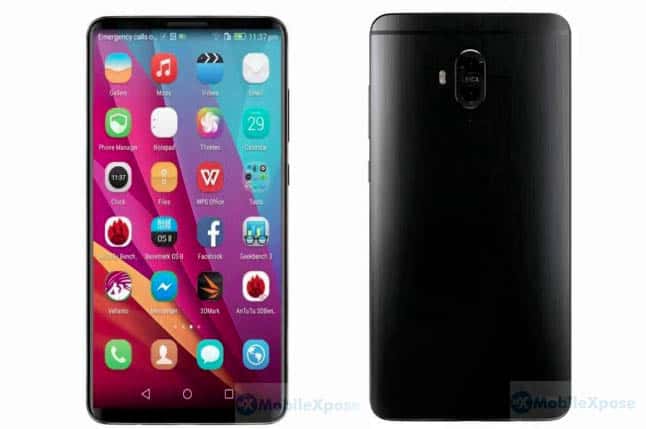 Two renders depicting what’s alleged to be Huawei’s Mate 10 Pro Android flagship surfaced online earlier today, having presumably originated from China. The images that can be seen above are largely in line with recent rumors about Huawei’s most powerful Android device ever, suggesting that the Mate 10 Pro will boast a nearly bezel-less design and feature a tall display panel with an aspect ratio of 18:9, i.e. 2:1. The renders almost certainly weren’t leaked from Huawei itself, not only due to their low quality and the fact they show no signs of a front-facing camera but also because the device depicted in them is shown as having around 70 percent of battery left. Due to psychological reasons, marketing departments always push for official product renders and promotional photographs to be showing handsets whose batteries are nearly or entirely full. Another confusing feature of the render depicting the front side of the phablet is the fact that its navigation bar shows two battery icons, thus being suggestive of low-effort photo manipulation.

Regardless, the overall shape of the handset and its two-sensor rear camera setup correspond to recent rumors about the handset which originated from more credible sources, with the new leak possibly being based on those previous reports about Huawei’s upcoming flagship. The device is said to feature a Leica-certified imaging system and be powered by the HiSilicon Kirin 970 SoC which Huawei describes as the first “true” AI chip on the planet, with the silicon having a special processing unit dedicated to artificial intelligence computing and related tasks. The handset is supposed to feature a 6-inch QHD panel and at least 6GB of RAM, as well as 64GB of internal flash memory expandable via a microSD card slot and a 4,200mAh battery which won’t be removable, according to previous rumors.

The Chinese original equipment manufacturer already confirmed that its next-generation Android flagship will be officially announced on October 16, with recent reports indicating that the company is actually set to unveil four devices – the Mate 10, Mate 10 Plus, Mate 10 Pro, and the Mate 10 Lite. All of the tech giant’s upcoming offerings should become commercially available by November, though it remains to be seen how many of them will launch in the West. Still, with the announcement itself being set to take place in Munich, Germany, it seems that Huawei is at the very least looking to cater to Europe with its new smartphone lineup.