Following a number of leaked images and various other info, the Huawei Maimang 6 has just popped up on GFXBench. Now, it is possible that this phone will be called the Huawei Mate 10 Lite once it gets announced, at least according to some info that surfaced recently, but in any case, we already have plenty of info when it comes to this phone, and this GFXBench listing actually paints a somewhat different picture, as it reports a somewhat different spec sheet, read on.

The Huawei RNE-AI00 got certified by TENAA (China’s equivalent to the FCC) earlier this month, and TENAA revealed both its specs and its design, design that leaked several times after that. Based on that design, the Huawei RNE-AI00 is the Huawei Maimang 6, but this GFXBench listing disagrees. TENAA said that the device will sport a 5.9-inch fullHD+ (2160 x 1080) display, which translates to an 18:9 aspect ratio, well, GFXBench claims that the device will ship with a 5.5-inch fulHD (1920 x 1080) display, in other words, its display will sport a 16:9 aspect ratio. GFXBench confirms that this phone will be fueled by one of Huawei’s mid-range, octa-core processors, which will be clocked at 2.3GHz, while the Mali-T830 GPU will be here for graphics processing. GFXBench also reports that this phone will include 4GB of RAM and 64GB of internal storage, which goes hand-in-hand with the info provided by TENAA. GFXBench reports that a 16-megapixel shooter will be included on the back of this phone, though the details regarding a secondary rear-facing camera are not here, well, if TENAA is to be believed, a 2-megapixel snapper will be included next to the phone’s main camera. TENAA reported that a 13 and 2-megapixel shooters will be available on the front side of the Huawei Maimang 6, and GFXBench lists only its 13-megapixel snapper, though a 2-megapixel camera will almost certainly also be included.

Android 7.0 Nougat will come pre-installed on the Huawei Maimang 6, which is something that both GFXBench and TENAA agree on, and on top of that OS you’ll get Huawei’s Emotion UI (EMUI) skin. The Huawei Maimang 6 will be made out of metal, and it will sport on-screen buttons, while the company’s branding will be present below the phone’s display. This phone will sport really thin bezels, and it will be announced later today, according to a teaser that surfaced recently. 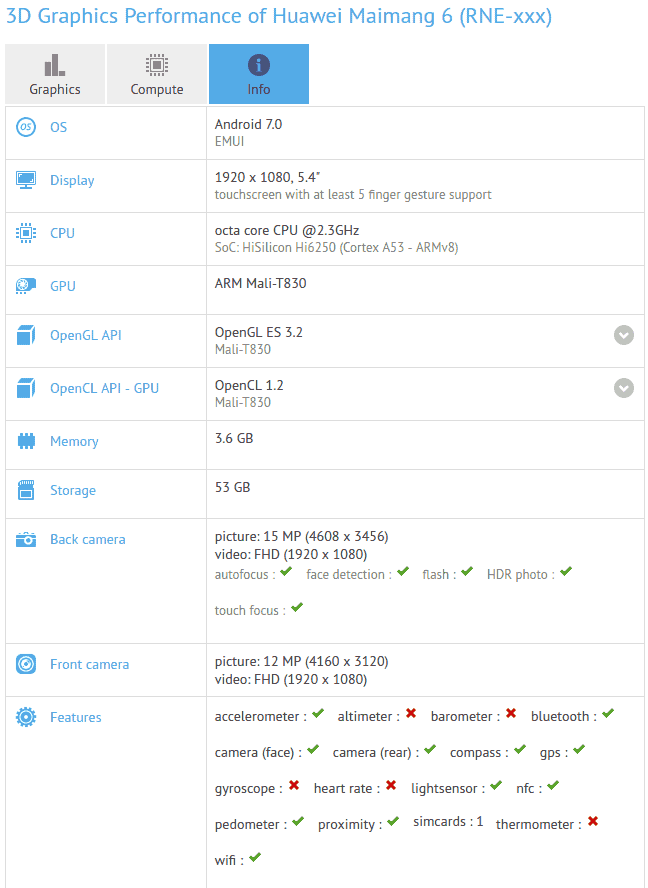