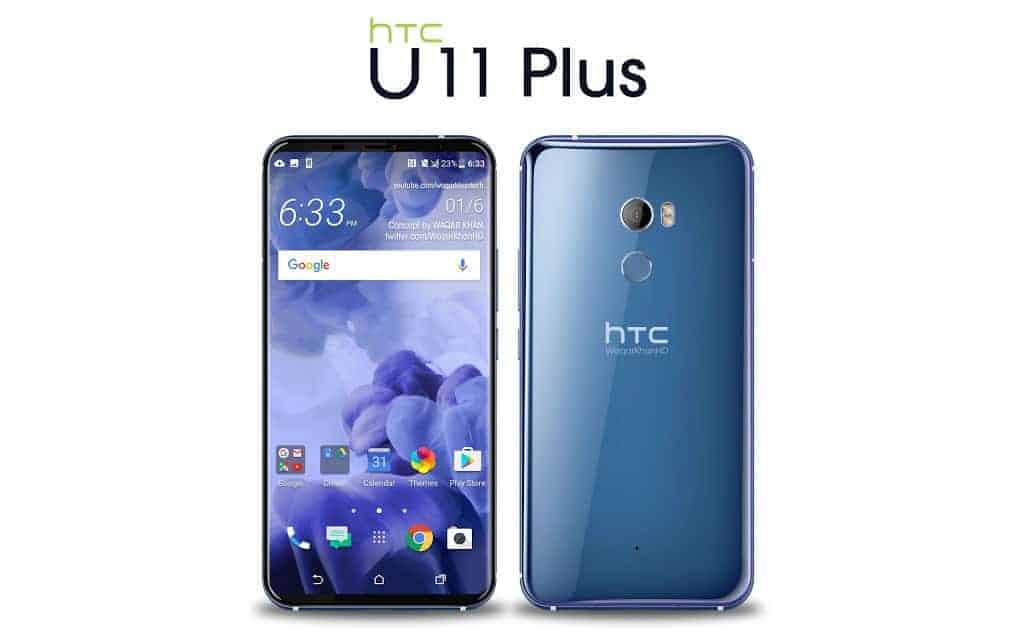 Following rumors from last week indicating that HTC is working on a new bezel-less flagship phone, a series of concept renders of the alleged HTC U11 Plus emerged more recently to reveal the smartphone's potential design. According to the rumors, the HTC U11 Plus will utilize the same chassis as the standard HTC U11 and will only replace the existing display with a border-less panel supplied by JDI. Those rumored specifications have been used as a basis for the creation of some unofficial 3D renders that can be seen below.

It's fairly easy to imagine a potential HTC U11 variant retaining all of its design characteristics save for regularly sized bezels. The overall design would hold little mysteries in this particular scenario, and HTC enthusiasts would have a pretty accurate description of the final product ahead of its official release. The HTC U11 Plus, as envisioned by recent reports, looks identical to the standard HTC U11, featuring a glossy back panel complete with a single camera module, a dual-LED flash, and a fingerprint sensor. The main change would consist of a display replacement, which would result in a larger diagonal, a different aspect ratio, and a bezel-less design similar to other flagship phones of 2017. Previous rumors claimed that the HTC U11 Plus will use a 5.99-inch bezel-less LCD panel featuring a resolution of 2,880 x 1,440 and an 18:9 aspect ratio. The unofficial renders show a couple of sensors on the upper edge flanking an earpiece, on-screen navigation buttons at the bottom, and a couple of physical buttons on the right edge.

As far as internal hardware is concerned, the HTC U11 Plus is said to offer no changes compared to the previous flagship, meaning that it should feature the Qualcomm Snapdragon 835 chipset coupled with 4GB or 6GB of RAM and 64GB or 128GB of internal memory expandable via a microSD card. The rear panel would accommodate a 12-megapixel sensor with optical image stabilization and phase detection autofocus, while a 16-megapixel selfie shooter would reside on the opposite side. The smartphone is rumored to carry the codename "Ocean Master" and reports suggest that it could debut in China this November. HTC has yet to make an official statement on the matter so whether the company is working on a bezel-free device meant to hit the market this year remains to be seen.