It seems like a new Gionee-branded smartphone is on its way, at least according to the newly-surfaced GFXBench listing. The Gionee S11 has just surfaced on Geekbench, a successor to the Gionee S10 handset which was announced back in May. In any case, the Gionee S11 will be the company’s mid-range smartphone, and it will sport an 18:9 display aspect ratio according to GFXBench.

GFXBench reveals that the Gionee S11 will sport a 6-inch fullHD+ (2160 x 1080) display, along with 4GB of RAM and 64GB of native storage. The device will be fueled by the MediaTek MT6763 64-bit octa-core processor, which is clocked at 2.3GHz. The Mali-G71 GPU ships as part of that SoC, and the source also reveals that Android 7.1.1 Nougat will come pre-installed on the Gionee S11, while Gionee’s Amigo OS skin will be included on top of it. A 16-megapixel snapper will be placed on the back of the Gionee S11, says GFXBench, while a 5-megapixel camera will be included on the device’s front side. Now, it’s possible that the GIonee S11 will ship with a dual camera setup on its back, as GFXBench registers only one camera sensor, while it never mentions the other one, and the Gionee S10 sported two cameras on its back, which probably means that its successor will as well. The Gionee S10 shipped with 16 and 8-megapixel rear-facing snappers, so it’s possible that the Gionee S11 will sport that very same setup.

It’s also worth noting that the Gionee S10 came with two front-facing cameras as well, so its successor may ship with such a setup as well. The Gionee S11 will probably be made out of metal, and it will be interesting to see how much will it cost, as its predecessor was priced at $378 back when it was released. We still do not know when will this smartphone become official, but it may arrive sooner than expected considering that it already surfaced on GFXBench. The Gionee S9 was announced back in November last year, while the Gionee S10 landed back in May, so it seems like Gionee is releasing a new smartphone in that series every 6 months, which means that the Gionee S11 might arrive in November. 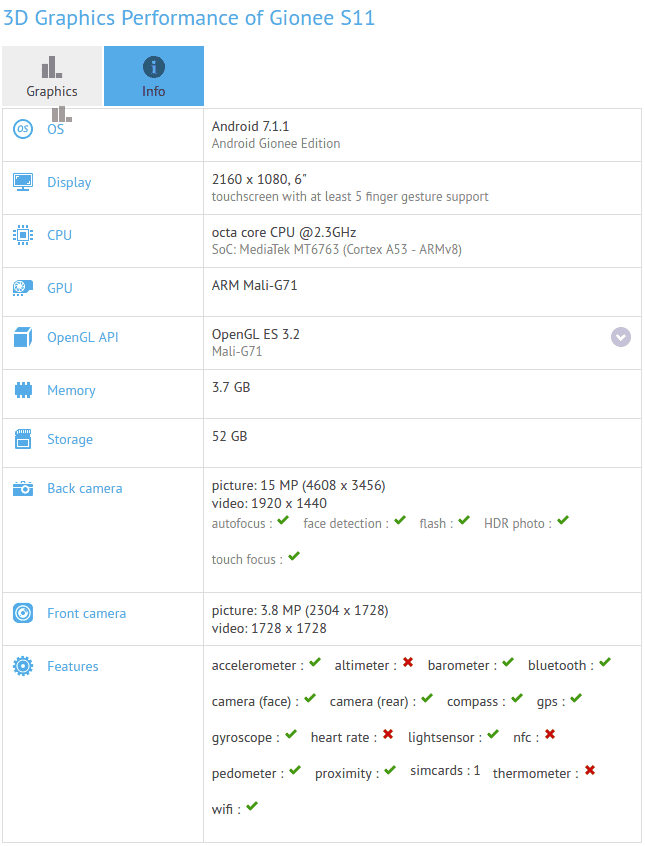