Gionee M7 will be formally unveiled in an event that will take place on September 25, according to a post made on the manufacturer’s official website. One of the key selling points of the handset is its full-screen AMOLED display and it seems that the manufacturer will use a Samsung-made display with a resolution of FullHD+ and an aspect ratio of 18:9 for the Gionee M7, resulting in the thin bezels at the top and bottom and even thinner bezels at the sides. A leaked front panel of the handset shows that top bezel will contain a single front-facing camera and an earpiece, while the bottom bezel contains the logo of the smartphone maker. The post also discussed the scarcity of Samsung AMOLED displays and the company takes pride on how they were able to obtain the panel for its handset.

The Gionee M7 is rumored to be powered by the Helio P25, a mid-range chipset offering from the Taiwanese fabless semiconductor firm MediaTek. The SoC is comprised of eight ARM Cortex A53 64-bit CPUs with a maximum frequency of 2.6GHz, and a Mali-T880 MP2 GPU clocked at 1GHz, which can support a maximum display resolution of 1920 x 1080. The Helio P25 also sports a modem that is capable of Cat. 6 LTE, which means that the device can attain maximum download speeds of 300Mbps. The chipset is fabricated using TSMC’s 16nm FinFET+ process node technology, which should result in reduced power consumption, and increased battery life for the smartphone. Gionee also included into its handset two high-level security chips, one is designed for data encryption, while the other is developed for secure mobile payments. This is an improvement over the Gionee M6 and the Gionee M6 Plus, which sports a single security chip design dedicated to data encryption.

The device also rumored to include 4GB of RAM and 64GB of internal flash storage, although there is no word yet on whether the device will support microSD card expansion. Meanwhile, the rear camera will likely sport a 16-megapixel sensor, while the front-facing camera may contain an 8-megapixel sensor. The handset is rumored to ship with Android 7.1.1 Nougat pre-installed, although amigoOS, the proprietary skin of the Chinese smartphone maker, will likely run on top of the operating system. More information about the handset’s complete specifications, availability, and pricing will be available once the device is officially launched. 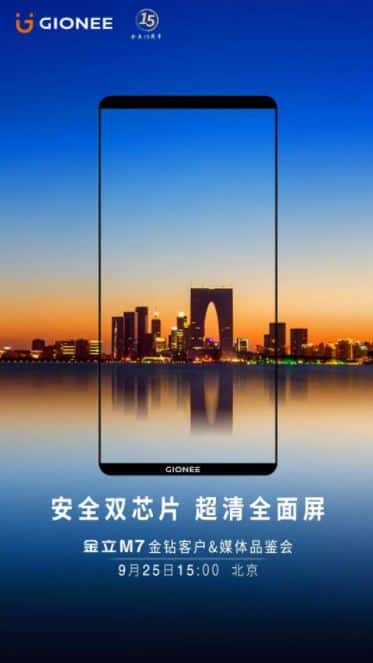