A variant of the upcoming Samsung Galaxy Tab Active 2 has appeared in the database of a popular benchmarking site, GFXBench. The database gives users a glimpse of the likely performance and internal specifications of the tablet. It seems that the Samsung Galaxy Tab Active 2 will be powered by the Exynos 7870 chipset, which contains eight ARM Cortex A53 CPUs with a maximum frequency of 1.5GHz and the Mali T-830 GPU. Based on the info provided by GFXBench, this tablet is on par with entry-level handsets like the Samsung Galaxy J7 (2016) and the Moto M in terms of performance. The model tested is the 4G LTE variant of the device, with the benchmark results stating that the device sports a slot for one SIM card.

The device also sports an 8-inch display with a resolution of 1200 x 800, and an aspect ratio of 4:3. The tablet includes 3GB of RAM and 16GB of internal flash storage, although there is no word yet on whether the device will support microSD card expansion. The rear camera of the device has an 8-megapixel sensor, while the front-facing camera is equipped with a 5-megapixel shooter, both of which are capable of recording 1080p videos. The tablet will likely ship with Android 7.1.1 Nougat pre-installed although Samsung’s proprietary skin will run on top of Google’s operating system. The Samsung Galaxy Tab Active 2 is expected to sport a rugged construction that should enable the tablet to withstand harsh environments like extreme weather, humidity, and shock.

It was first reported last June that Samsung is developing a successor to the Galaxy Tab Active, an entry-level tablet that was released back in September 2014, and based on the specifications, it seems that the upcoming device will again be sold as an entry-level offering. The Federal Communications Commission has already certified an LTE-capable variant of the device with the model number TM-395, while a Wi-Fi only variant identified through the model number TM-390 is still in the works. The original Galaxy Tab Active was available in the European and Latin American markets, although the FCC certification may mean that the successor may actually see a stateside launch within the next few weeks. 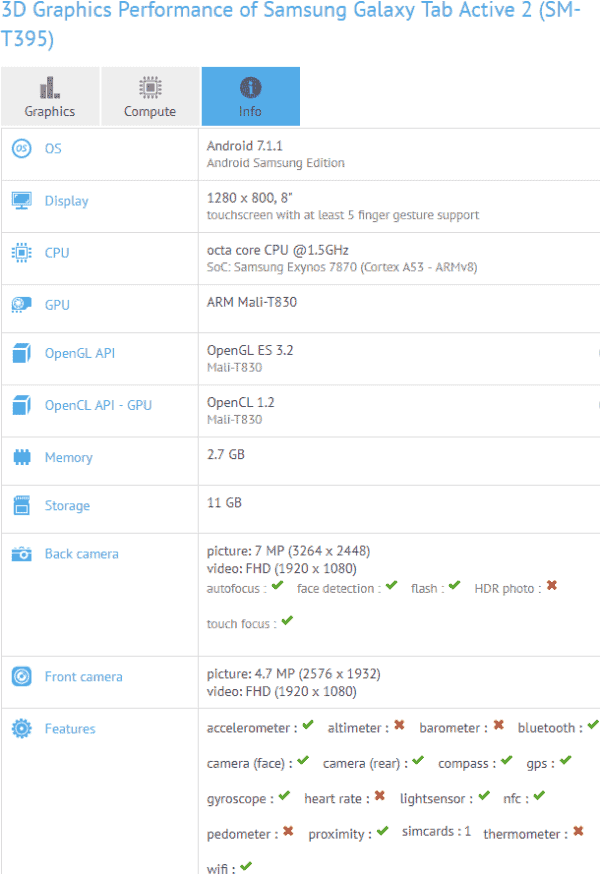