Android 8.0 Oreo-powered Samsung Galaxy S8 has just surfaced on Geekbench. This new listing more or less confirms the update might land soon, after Samsung confirmed earlier this month that the development is on the way. Now, this update probably won’t in a week or two, but it may arrive sooner than some anticipated. Having said that, other high-end Galaxy-branded phones will probably get the update in the coming months as well, devices like the Galaxy Note 8, Galaxy S8 Plus, Galaxy S7, and so on.

Having said that, the test unit with Android 8.0 Oreo managed to hit 2,029 points in the single-core test on Geekbench, while it scored 6,845 points in the multi-core test. It’s also worth noting that this is the Exynos model of the Galaxy S8 we’re looking here, the one running the Exynos 8895 SoC. The Samsung Galaxy S8 has been available out in the market for quite some time now, Samsung introduced it back in April, and it’s still the company’s flagship smartphone, though it is joined by its larger sibling, the Galaxy S8 Plus, and the newly-announced Galaxy Note 8 which became available for purchase earlier today. The Samsung Galaxy S8 will probably get updated to Android 8.0 Oreo first, though that’s just a guess on our part, and it actually runs Android 7.0 Nougat out of the box, while Samsung’s custom UI is installed on top of it. Android 8.0 Oreo brings a number of new features to the Android ecosystem, and most of those features will probably be available via Samsung’s custom UI. Once Android 8.0 Oreo lands, you’ll be able to use the all-new picture-in-picture mode, for example, while some battery consumption optimizations will also be included, not to mention that the OS will handle battery-sucking apps much better now, and will not allow them to go wild in the background.

The Samsung Galaxy S8 features a 5.8-inch QHD+ Super AMOLED Infinity display, which is curved on the sides. This handset is fueled by either the Exynos 8895 or the Snapdragon 835, depending on the market you get it in. The Galaxy S8 packs in 4GB of RAM, and it comes with a 3,000mAh non-removable battery, while it is available in various color variants. If you’d like to read more about the phone’s specs, click here. 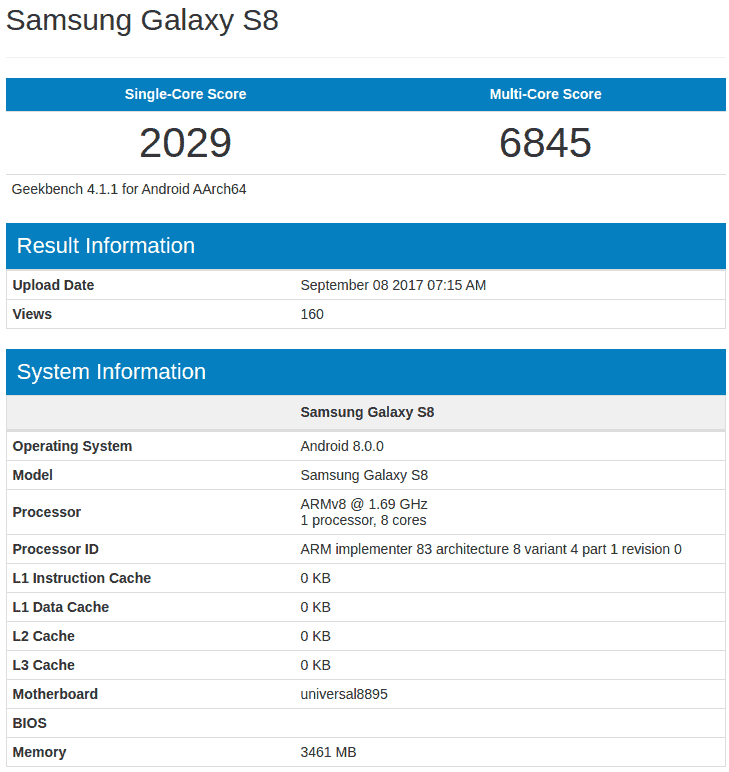