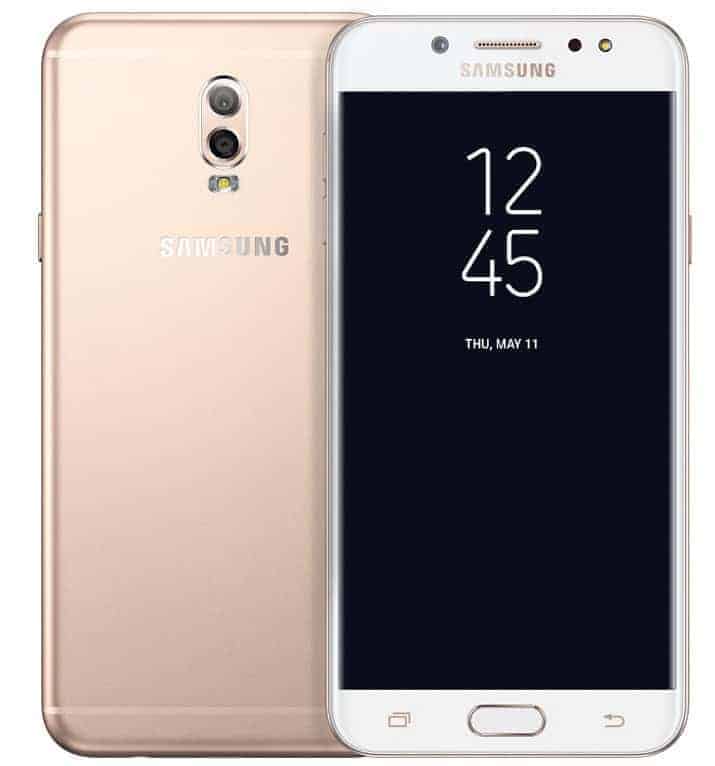 After some leaked content suggested that the Galaxy J7 Plus is coming soon, the phone has just got announced in Thailand by Samsung. The device appeared on the company’s official website in Thailand, and it seems to be a rather capable mid-range offering by the Korea-based tech giant. This phone is made out of metal and glass, and it features a dual camera setup on its back. The Galaxy J7 Plus also sports a front-facing fingerprint scanner, which doubles as a physical home key, and is flanked by two capacitive buttons.

Having said that, this phone is equipped with a 5.5-inch fullHD (1920 x 1080) Super AMOLED display which comes with a 2.5D glass on top of it. MediaTek’s Helio P20 64-bit octa-core SoC fuels this smartphone, along with the Mali T880 GPU for graphics. The device also includes 4GB of RAM and 32GB of expandable storage, while Android 7.1.1 Nougat comes pre-installed on the phone along with Samsung’s custom UI. Two 13-megapixel snappers (f/1.7 aperture) can be found on the back of this smartphone, and those cameras are helped with an LED flash. A 16-megapixel camera (f/1.9 aperture) is located on the front side of the device, and it also comes with an LED flash. This handset offers two SiM card slots, and a 3,000mAh non-removable battery is also a part of the package. 4G LTE with VoLTE is included here as well, and so are Bluetooth 4.2 and Wi-Fi 802.11 a/b/g/n (2.4+5GHz).

The Samsung Galaxy J7 Plus comes in Black, Gold and Rose Gold color variants to Thailand, and it costs 12,900 Thai Baht ($388), while consumers in Thailand can pre-order it until September 17. Samsung will start shipping this phone to consumers who pre-order it on September 22, and it will hopefully become available for purchase around that date as well. It’s also worth noting that the company is offering a free set of Samsung U Flex headphones along with pre-orders for the Galaxy J7 Plus. That is more or less all the info that was shared by the company, the Galaxy J7 Plus is yet another mid-range offering by Samsung, and it will probably become available in some other markets as well, though for now, it’s limited to Thailand.