Samsung will likely roll out Android 7.0 Nougat to the Samsung Galaxy J5 Prime soon, after the Wi-Fi Alliance certified a model of the handset running the upgraded software version. The tested unit has the model number SM-G570F/DS, and the certification process was completed on August 31, 2017. It is important that handsets undergo the Wi-Fi Alliance certification process, to ensure that the handset is free from connectivity issues caused by software bugs.

Once Android 7.0 Nougat arrives, the owners of the Samsung Galaxy J5 Prime will experience the features incorporated into the upgraded version of the operating system. Native support for multi-window mode is included with the OS update, which means more applications can now be viewed simultaneously in split-screen. Android Nougat also brings the Quick Reply feature, allowing users to reply to messages and emails through the notification shade. This software upgrade will also include some battery-related improvements, that are supposed to help with battery consumption. The update also includes a number of under-the-hood improvements, that are designed to improve the performance of the device. In addition to those, the software package should also upgrade the features incorporated to the South Korean manufacturer’s proprietary skin, though the Galaxy J5 Prime customers won’t get all the features that are included in Samsung’s skin on more expensive phones, as those handsets come with more RAM and more powerful SoCs, not to mention, more storage.

The Samsung Galaxy J5 Prime was launched by the smartphone maker back in September 2016. The smartphone is powered by the Exynos 7570 chipset, which is comprised of a quad-core ARM Cortex A53 CPU clocked at 1.4GHz, and the Mali T-720 GPU. The device sports a 5-inch 720p display that is protected by a sheet of Gorilla Glass 3. The handset also includes 2GB of RAM and 16GB of internal flash storage, that is expandable by a microSD card. The rear camera contains an 8-megapixel shooter, while the front-facing camera includes a 5-megapixel sensor. To keep the lights on, the Samsung Galaxy J5 Prime is equipped with a 2,400mAh non-removable battery. The handset includes a fingerprint scanner for biometric security, and it also supports dual SIM cards. More details about the upcoming update will likely become available within the next few weeks. 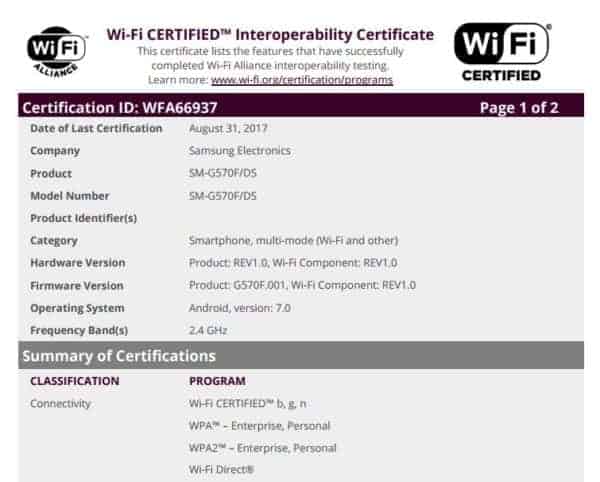