Biometric authentication has been steadily gaining ground and it keeps growing in popularity, and Counterpoint Research estimates that more than one billion smartphones will have fingerprint sensors in 2018. Smartphone security is paramount in this day and age, when phones serve far more purposes than just calling and texting. Smartphone users nowadays rely on their device for a wide range of tasks and activities including mobile banking, online shopping, work, emails, and more, and smartphones hold plenty of sensitive information that needs to be protected. If PIN codes and patterns were the go-to solution a few years ago, fingerprint sensors are now taking over and they will be far more ubiquitous next year, if Counterpoint Research is accurate.

Counterpoint Research estimates that more than one billion smartphones equipped with fingerprint scanners will be shipped next year, as fingerprint sensors will become the standard solution for authentication. The research firm explains that several factors contributed to this trend, including the rise of digital payments and other such services, and the growing popularity of mobile banking. The trend is expected to permeate all segments of the smartphone market. As smartphones are becoming increasingly indispensable, secure authentication is essential. Parv Sharma, a Research Associate at Counterpoint Research, says that nearly three in four handsets shipping in the next calendar year will come with fingerprint scanners. Sharma further notes that as the technology becomes more accessible and affordable, fingerprint sensors will make their way to more smartphones with entry-level specifications. 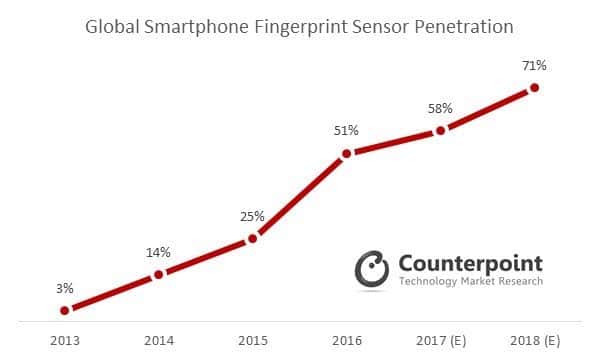