Android 8.0 Oreo-powered OnePlus 5 has just surfaced on Geekbench. This listing dates back to September 25, though it’s now making the rounds. The OnePlus 5, as most of you know, ships with Android 7.1.1 Nougat out of the box, with OnePlus’ OxygenOS installed on top of it, though OnePlus release a closed beta test of Android 8.0 Oreo quite recently. The company actually said that an open beta will probably launch by the end of this month for the OnePlus 3, OnePlus 3T and OnePlus 5, which means that the final build might arrive sooner than most of us were hoping for at first.

Having said that, this Geekbench listing says that the phone managed to score 1,837 points in the single-core benchmark, while it was able to hit 6,085 points in the multi-core test. That being said, the Android 8.0 Oreo-powered OnePlus 5 will probably get all the features that stock Android 8.0 Oreo build brings, such as new battery improvements, notification shade changes, and a number of other features that Google introduced a while back. The OnePlus 5 is expected to get the update first, though considering that the company launched a closed beta version of the software to the OnePlus 3, OnePlus 3T and OnePlus 5 at the same time, it’s possible that the final build will land on all of these phones at the same time as well. In addition to that, it’s worth noting that the company is now giving away a pair of Bullets V2 earphones with every purchase of the 8GB OnePlus 5 for US and Canada-based consumers, until September 30, so if you’re interested in getting the device, not may be the time.

The OnePlus 5 is made out of metal, and it sports a dual camera setup on the back. This phone comes with a front-facing fingerprint scanner, and it sports a 5.5-inch fullHD (1920 x 1080) Optic AMOLED display. The device comes in both 6GB and 8GB RAM variants, while it packs in 64GB or 128GB of non-expandable storage. Qualcomm’s Snapdragon 835 fuels this phone, and a 3,300mAh non-removable battery is also a part of the package. A 16-megapixel front-facing shooter has been implemented in this phone as well, and you can use the company’s Dash Charge fast charging in order to charge up the aforementioned battery pack. 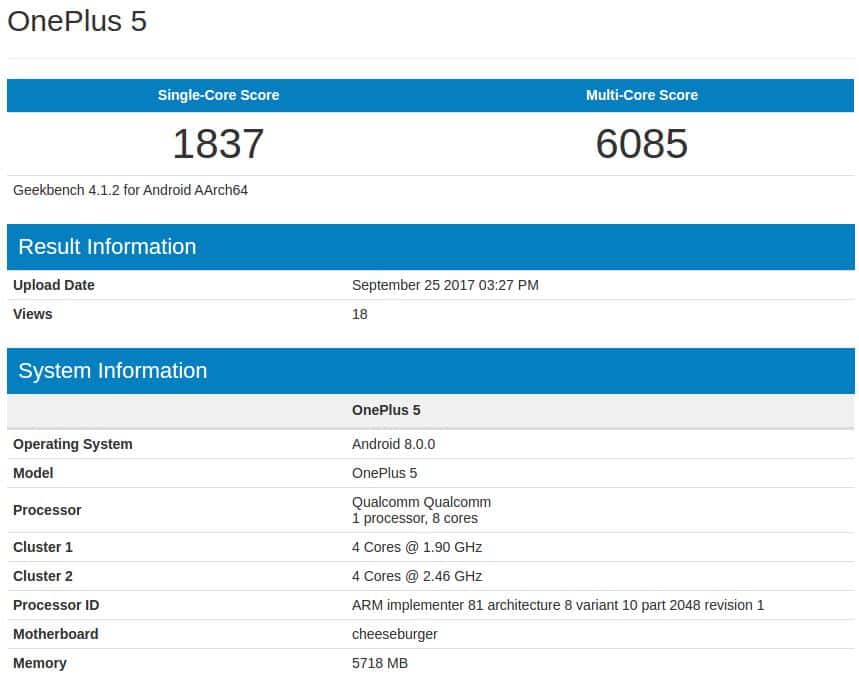