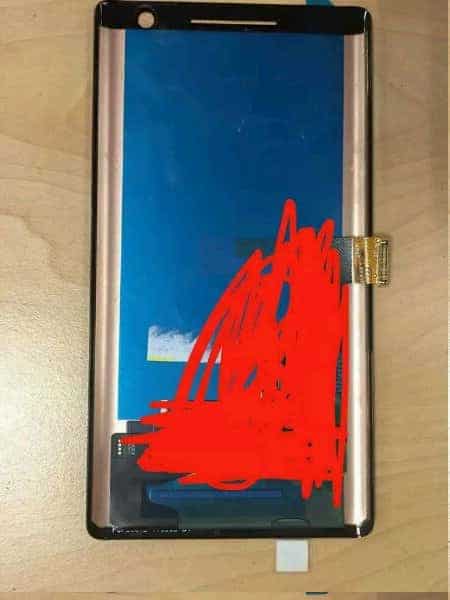 HMD Global had introduced quite a few Android-powered, Nokia-branded devices thus far, and the Nokia 9 is expected to be the most powerful of them all, speaking of which, the device's display assembly has just surfaced. If you take a look at the provided image, you will notice that the Nokia 9 will have really thin bezels, presuming this leak is accurate, of course. Bezels on the sides and below the display are almost non-existent, while the bezel above the display is somewhat thicker, but not by much.

Now, you will notice that there is a cutout for the earpiece above the display, and also a cutout for the phone's front-facing snapper, and judging by the shape of the leaked display assembly, the phone's display will sport curved corners, like the ones we've seen in several Samsung and LG-branded flagships. Now, by looking at the provided image, you will also notice that the Nokia 9's display is expected to be curved on the sides, at least it looks that way. Having said that, take this leak with a grain of salt, there's no proof that this is the Nokia 9, but it's possible. The Nokia 9 is expected to arrive before the end of this year, and judging by the rumors and leaks, this phone will sport a more modern design than its sibling, the Nokia 8, and it will also ship with somewhat more powerful specs.

The Nokia 8 was announced back in August, and it's the company current flagship. This smartphone is not only fueled by the Snapdragon 835, but it also comes in both 4GB and 6GB RAM variants, while it sports a 5.3-inch QHD IPS LCD display. Having said that, the Nokia 9 is also expected to ship with the Snapdragon 835 64-bit octa-core processor, while the phone will probably pack in 6GB of RAM as well. It is still unknown how large will its display be, but it will probably be considerably larger than the panel Nokia used in the Nokia 8, simply to differentiate the two phones. It is also possible that the Nokia 9 might come with a display which will sport an 18:9 aspect ratio (the leaked display seems to sport a regular 16:9 aspect ratio), though we're only guessing at this point.