Alcatel took to the latest iteration of IFA to officially unveil four new devices in the form of the Idol 5, Idol 5S, A7, and the A7 XL, most of which have already been the subjects of numerous leaks and rumors in recent months. The two Idol-series devices will be available for purchase this month in Europe, whereas the A7 and A7 XL will start being retailed this fall, with most of them being set to be commercially available on a global level.

Despite having an identical name, the new Alcatel Idol 5S isn’t the same device that TCL Communication released in the United States earlier this year, with the smartphone primarily differing from its counterpart in the chipset department, being powered by the MediaTek MT6757 (Helio P20) system-on-chip (SoC) with eight Cortex-A53 cores, four of which operate at 1.65GHz, and the rest of which have a maximum frequency of 2.35GHz. The handset is also equipped with 3GB of RAM and 32GB of internal flash memory expandable via a microSD card slot by up to 256GB. It features a 12-megapixel primary camera with an aperture of f/2.0 in the top-left corner of its rear panel, whereas its top bezel houses an 8-megapixel imaging sensor with an identical aperture, though only the main camera module of the device is accompanied by a dual-LED flash unit. The handset is powered by a 2,850mAh battery which Alcatel suggested should be more than enough to make it last throughout the day on a single charge, which seems like a probable scenario since the device carries a relatively compact 5.2-inch IPS LCD screen with a resolution of 1,920 by 1,080 pixels. The Alcatel Idol 5S will soon be available for purchase in Europe for €399.99, which translates to approximately $475. 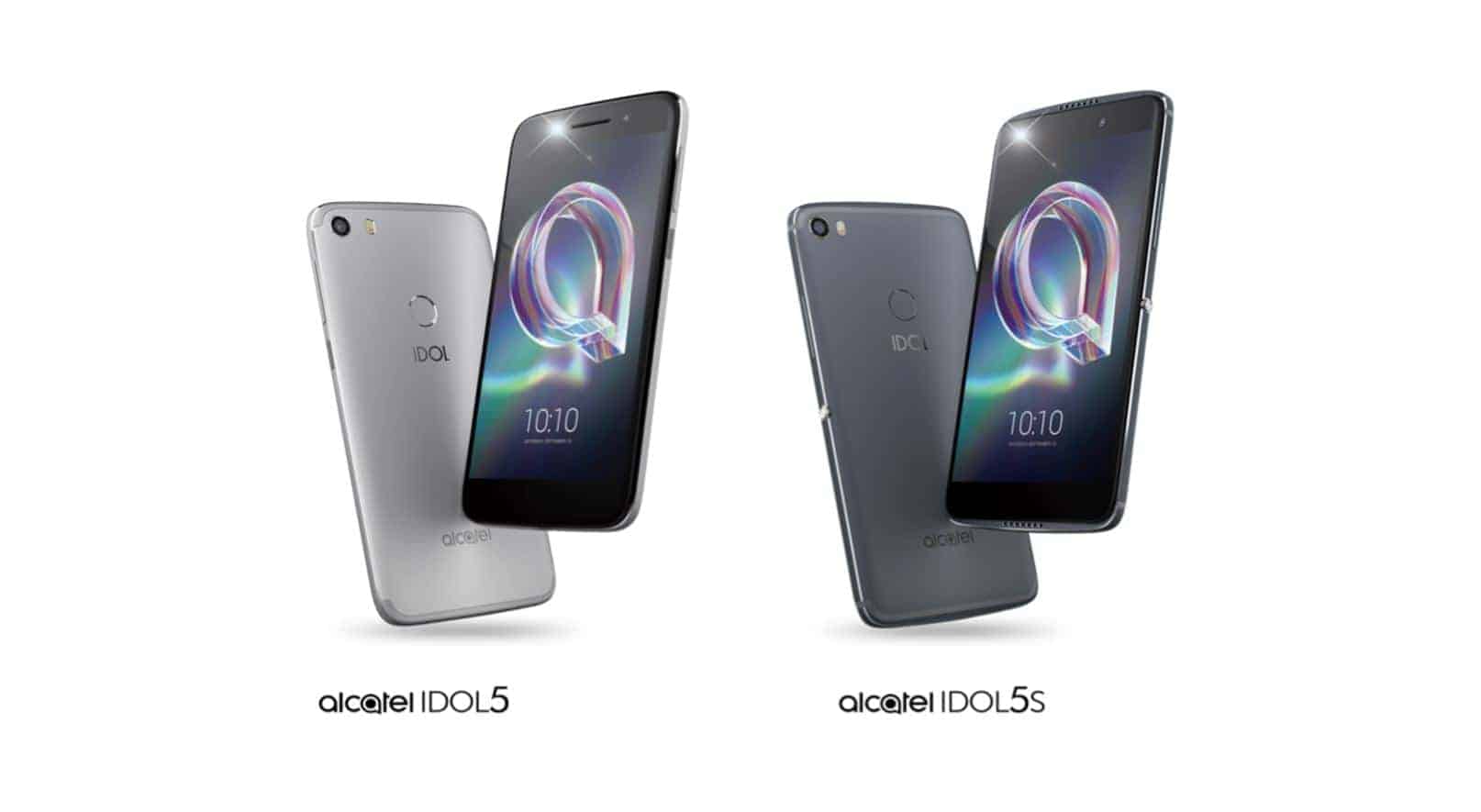 The Alcatel Idol 5 is meant to be a more affordable alternative to the company’s other offering, having an identical screen but a weaker MediaTek MT6753 SoC with four Cortex-A53 cores operating at a maximum of 1.3GHz. It also comes with 3GB of RAM, but only features 16GB of storage space, though the latter is still expandable by up to 256GB via a microSD card. Its battery isn’t removable and has a capacity of 2,800mAh, so coupled with a more conservative chip, the Idol 5 will likely have an identical or slightly better battery life than the Idol 5S. The main camera module of the device entails a 13-megapixel sensor with an f/2.0 aperture and a dual-LED flash, whereas the handset ships with a 5-megapixel (f/2.4) camera on the front. Unlike its more expensive sibling which has a USB Type-C connector, the Idol 5 is equipped with a microUSB 2.0 port and is available in Metal Black and Metal Silver color options for €239.99, or just over $285. Both the Idol 5 and Idol 5S run Android 7.1 Nougat out of the box, though only the former will make its way out of Europe, being scheduled to debut in Latin America in the fourth quarter of the year.

The newly announced Alcatel A7 is a device set to compete in the lower mid-range market segment, having a 5.5-inch Full HD display panel which is powered by the MediaTek MT6750T, an SoC with four 1.0GHz cores and a quad-core 1.5GHz cluster. It’s equipped with 3GB of RAM and 32GB of native storage expandable by up to 128GB via a dedicated microSD card tray, and runs a modified version of Android 7.0 Nougat. The handset features a 4,000mAh non-removable battery and a 16-megapixel rear camera with an aperture of f/2.0, dual-LED flash, and phase detection autofocus (PDAF) support which is also present in the aforementioned models. Its secondary imaging sensor is of the 8-megapixel variety and comes with an LED flash, making the Alcatel A7 a rather selfie-focused device. Alcatel will start selling this particular handset in November for €229.99 ($272), with the firm only announcing the Metal Black variant of the A7 for the time being. 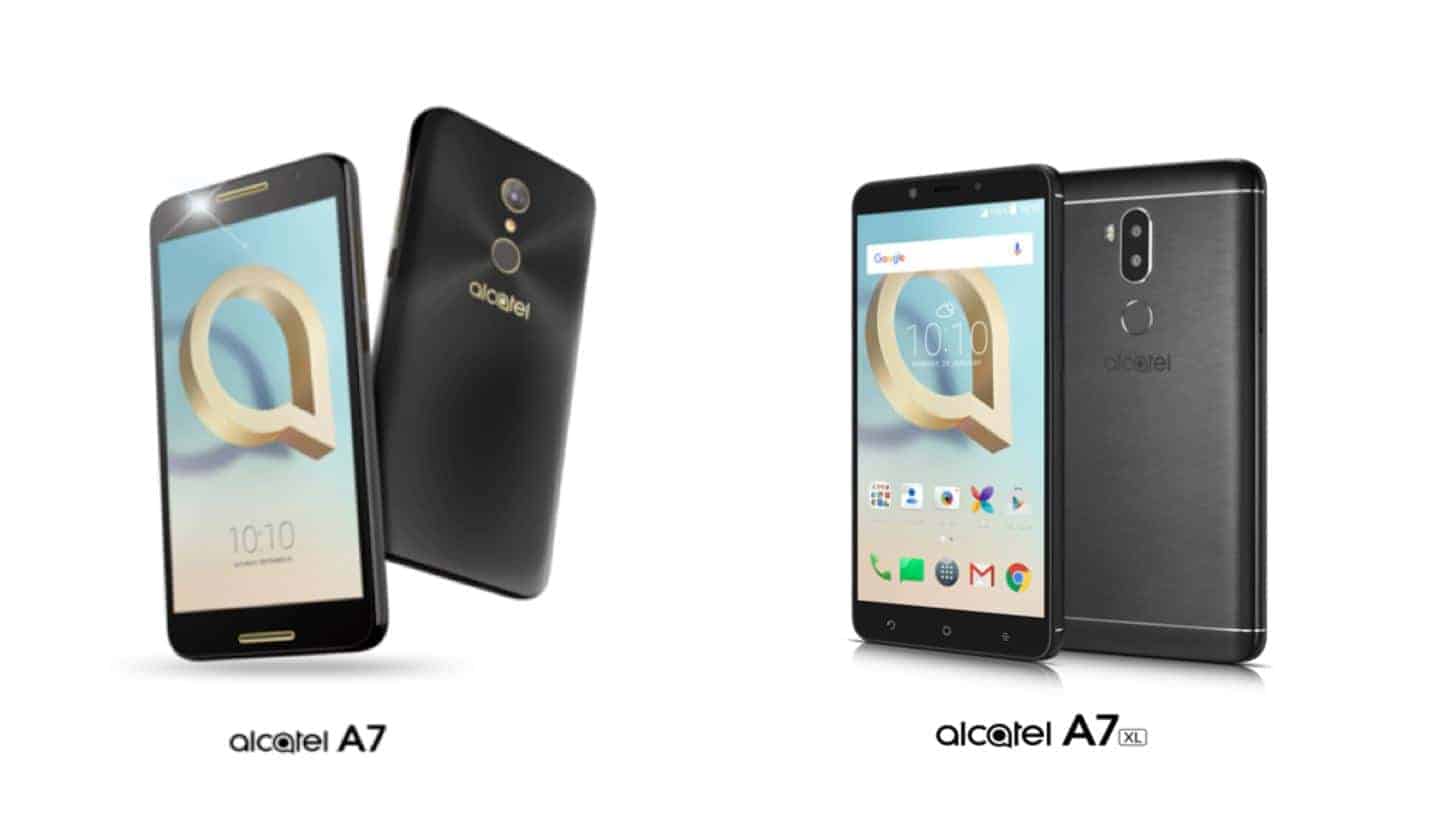 The A7 XL is the largest device among Alcatel’s new offerings, boasting a 6-inch Full HD LTPS display panel backed by the same 4,000mAh battery, with the company stating it will offer both single SIM and dual-SIM models of the device. The phablet is powered by the same SoC found inside the A7 and also sports 3GB of RAM and 32GB of expandable storage space. Apart from Android 7.1 Nougat, the A7 XL also boasts a dual camera setup entailing two vertically arranged sensors, with one being of the 12-megapixel variety and the other having a 2-megapixel resolution. The latter is primarily used for background blur in certain shots which should add more depth to your images, the company said. The top bezel of the A7 XL sports a 5-megapixel sensor with an LED flash, whereas its main camera module is supported by a dual-LED unit. Both the A7 and A7 XL feature a microUSB 2.0 slot, though the larger device will be available in one additional color; apart from Metal Black, Alcatel is also planning on selling the A7 XL in Metal Gold. The handset will be priced at approximately €279.99 ($332) once it’s released in November and will also make its way to the Middle East, Africa, Latin America, and the APAC region in the final quarter of the year.