U.S. Cellular has now released its Q2 2017 report and despite that revenues are down year-over-year, the company's president and CEO, Kenneth R. Meyers, says things are looking up. That's because the company had a "successful quarter" in terms of "attracting new customers and meeting the needs" of current customers. According to Meyers, that's all down to U.S. Cellular's Total Plans and the plans' unlimited options.

By the numbers, the company saw an overall drop in operating revenue of $29 million year-over-year – dropping from $992 million to $963 million. At least $9 million of that decrease occurred over the past 6 months, according to data released with the report. Net income that can be attributed to shareholders and diluted earnings were also down by about half -dropping from $27 million and $0.32, respectively, to $12 million and $0.14 from 2016 to 2017. Meyers says that the biggest contributors to losses were the current pricing environment and investments which the company made with the aim of creating growth. Despite data traffic increases of 51 percent from last year's Q2, Meyers claims that cash expenses are down. Meyers continues to point out that the expectation is for the impacts to only affect short-term profitability. For the rest of 2017, the company expects to return to its previously made projections with no changes. If all goes well, the company should see total operating revenues for the year of around $3.8 billion to $4 billion, with an adjusted operating income before depreciation and amortization of $550 million to $650 million.

Adjusted EBITDA, on the other hand, is expected to land at around $700 million to $800 million. Capital expenditures are estimated to run around $500 million for the year. The report does not include projections or guidance with regard to income taxes because the company doesn't believe the impact can be reasonably predicted. Unfortunately, U.S. Cellular's position in the market does not give it much room to breathe. However, the numbers and Meyers' statements do seem to suggest that the company is, at very least stable for the time being. The company also recently expressed a distinct disinterest in selling out, despite urging from investors. Meyers, for his part, believes the company can persist with continued network enhancements, including the ongoing launch of VoLTE services – which is expected to continue into 2018. 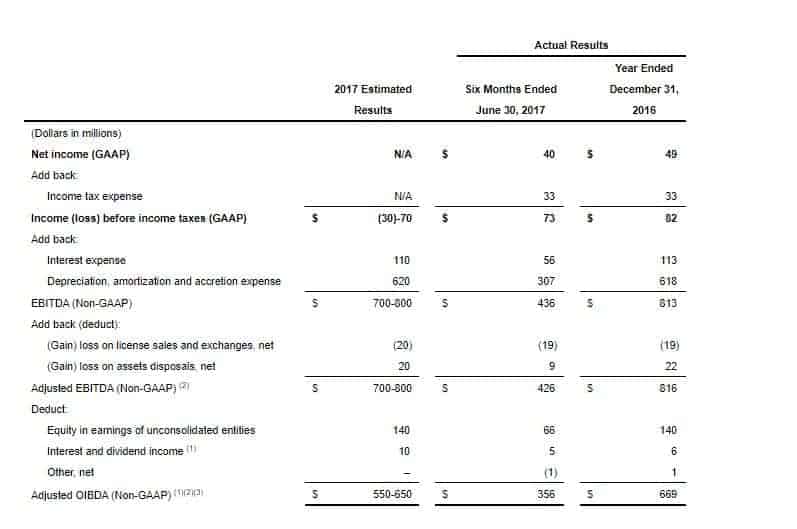