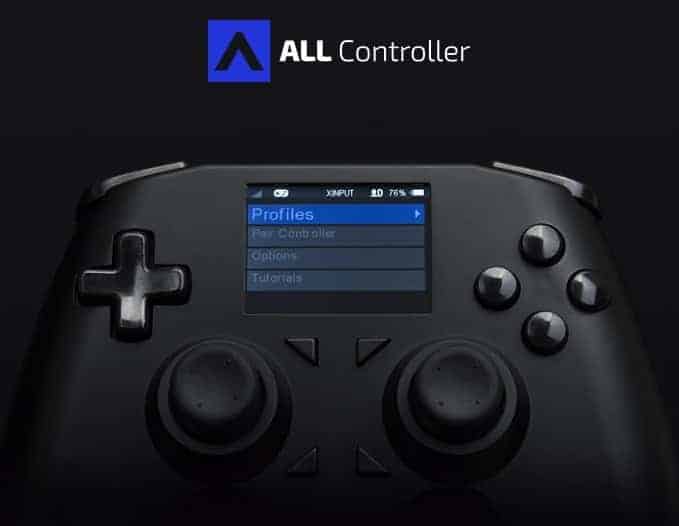 The ALL Controller is a new product that has now surfaced on Kickstarter looking for backers. Although this is just a controller, it is not just any old controller. Instead, the ALL Controller looks to be just that – a controller that can be hooked up to, and control, just about any device you might need a controller for. To put this into perspective, the Kickstarter listing states the ALL Controller is not only compatible with Windows PCs and Mac, but also the Xbox 360, the Xbox One, the PlayStation 3, PlayStation 4 and of course, Android smartphones and tablets. With the listing also stating that support for the Nintendo Wii, WiiU and the Switch will be added soon. So this really does seem to be a one-size-fits-all type of controller.

The magic behind it partly relies on the "custom USB adapter" that comes as part of the package. While this is a USB dongle sort of adapter, it presumably comes equipped with all the supports needed to then allow the controller to connect to whatever platform and device the ALL Controller is connected too. Meaning switching from using the controller with a PlayStation 4 to the NVIDIA SHIELD could be just as simple as switching the USB adapter from one device to the other. If that is not enough of a reason to buy, the ALL Controller is also said to offer up to 40 hours of usage (for the wireless version), can be used as a mouse and a keyboard, and even comes with an LCD display for easy configuration and profile selection.

As is probably to be expected, in spite of still having more than 40 days remaining on the Kickstarter listing, the company behind the ALL Controller (Digital Depth) have already surpassed their initial $59,000 goal. In fact, as of now it seems they are closing in on double that amount. That however, does not mean that interested parties cannot still get in on the action. As Early Bird backing is still available. At present, $55 CAD ($44 USD) will secure one ALL Controller. Although, this price is only for the wired version which comes with all the profiles and USB drivers included. In contrast, $80 CAD ($64 USD) will secure a wireless ALL Controller, equipped with Bluetooth capabilities. Moving up the price spectrum, $100 CAD ($80 USD) will net a wired ALL Controller with the USB dongle, while $110 CAD ($87 USD) is the lowest price for the wireless ALL Controller with USB dongle. In all instances, shipping is due to commence at the end of April with deliveries expected in May, 2018.

Advertisement
More info: ALL Controller
Advertisement
Trusted By Millions
Independent, Expert Android News You Can Trust, Since 2010
Publishing More Android Than Anyone Else
0
Today
186
This Week
106
This Month
4093
This Year
105570
All Time
Advertisement