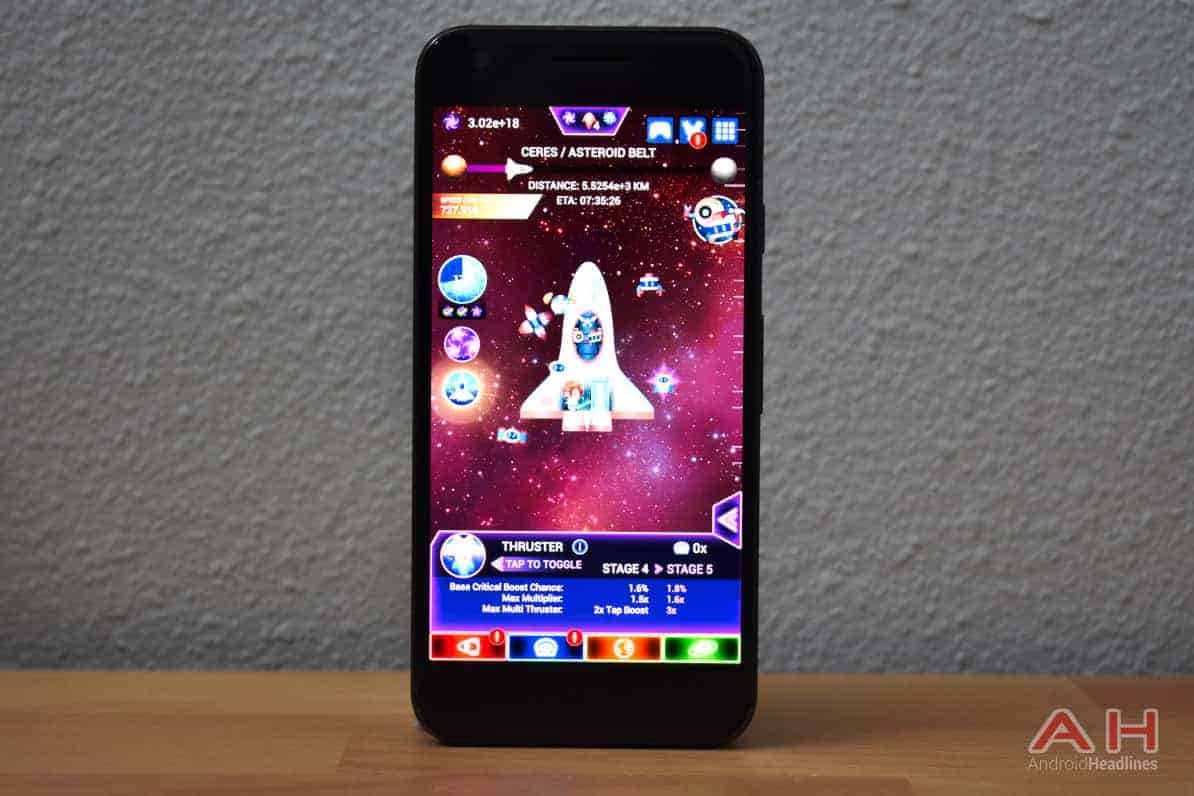 Clicker games aren't for everyone, that's entirely understandable, as many times they aren't much more than just endless tapping with little else. While Star Tap – Idle Space Clicker is a clicker game there is definitely more to it than just hours upon hours of tapping. There are small cutscenes with a developing story that unfolds as you play, and resource gathering that will happen as you progress from location to location, which you'll need to use to level up and upgrade your different skills and such. It also has some anime-inspired visuals and a nice casual feel to it that will still progress even if you aren't playing. Let's take a closer look at Star Tap, which just released on August 3rd, and see what it has to offer.

Before you can embark on your journey through space and see what's out there, you'll need to head to the Play Store and download Star Tap, then from there you can begin to explore the reaches of space. 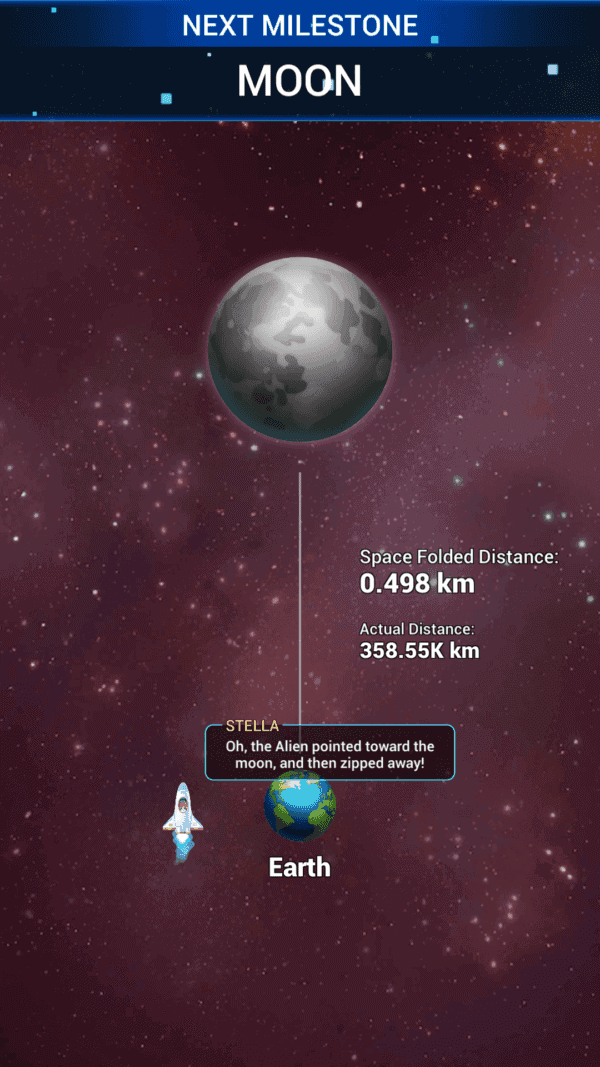 Each time you make a leg of your journey through space to a new destination you will see a screen that looks like the one above, and all kinds of useful information can be seen, like the actual distance, as well as the location's name, and the space folded distance if you have a boost enabled that allows you to fold space so your trip to the new location is shorter. 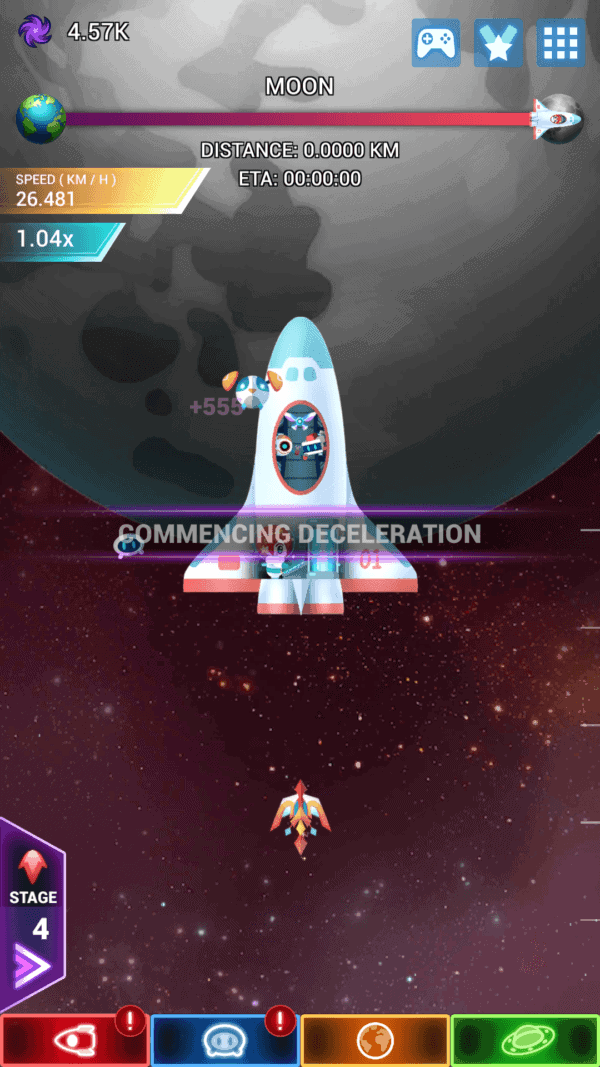 When you finally arrive at your destination you'll see the screen above, and off to the left side you can see the speed at which you were traveling as well as any speed multipliers that may have been applied.

As you play, you'll be able to gather resources automatically simply by continuing to travel onward to your next destination. There will also be three modes of play, including StarSoul Mode, Thruster Mode, and Resource Mode, each having their own unique benefits when used. StarSoul Mode for example, will give players a bonus (such as letting you enter a slipstream for increasing tap effectiveness) when tapping the screen actively as opposed to just letting the game sit idle. Thruster Mode meanwhile will give players a critical boost that makes it possible to reach destinations faster. Of course, there are other bonuses which allow you to reach locations quicker, but Thruster Mode can always be engaged. The last mode is Resource Mode, and as the name would suggest this is geared towards helping you collect more resources with every single tap. 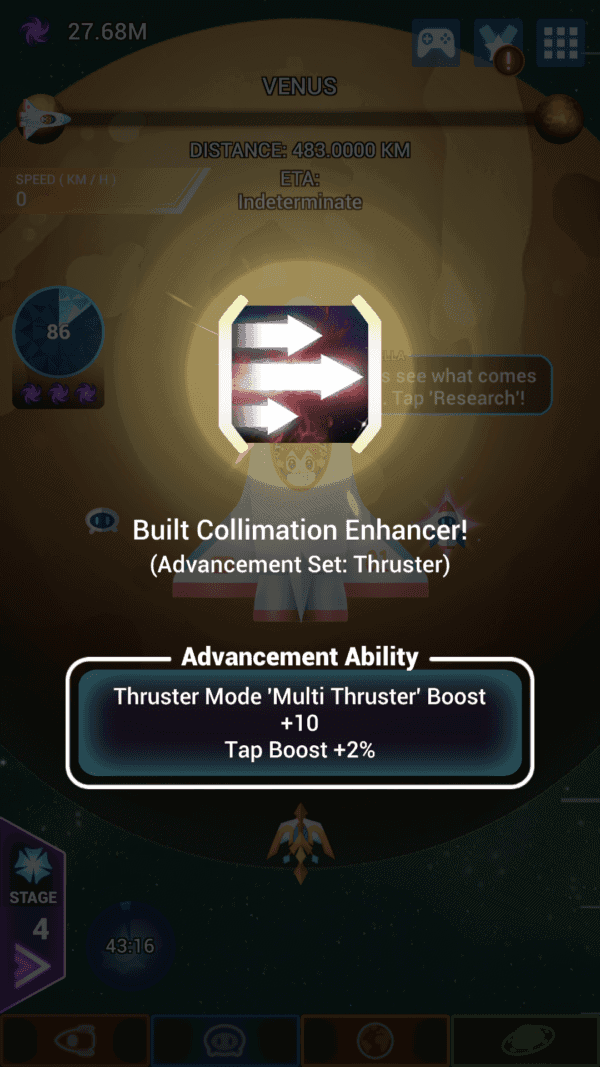 As you progress through space on your journey you'll gain new abilities, such as the Advancement ability, which gives a multiplier boost to your Thruster Mode, and this will essentially add a two percent boost to your taps. 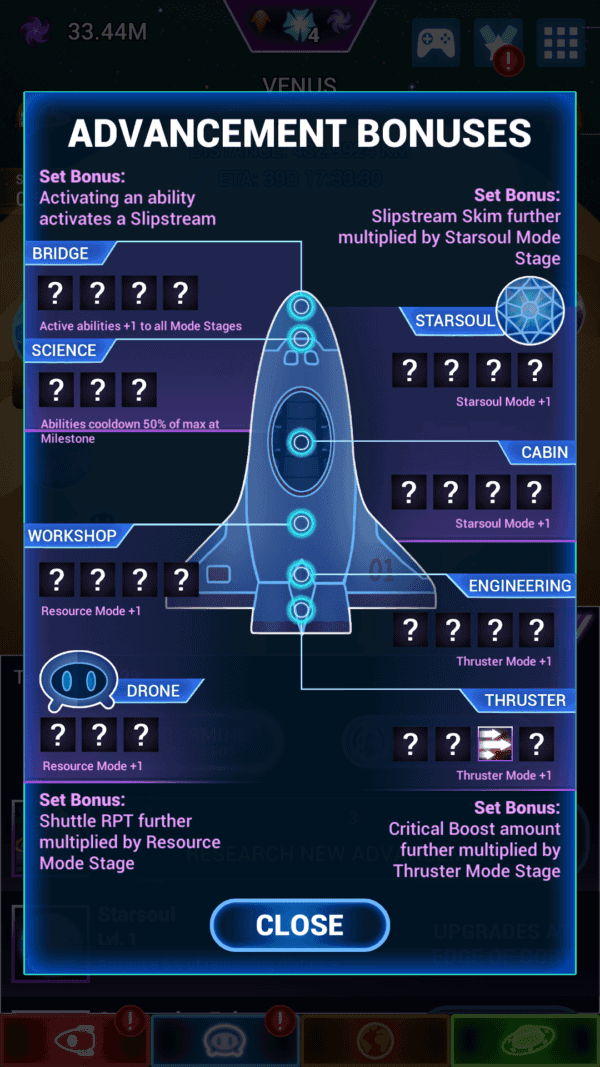 There are all kinds of other advancement bonuses you can acquire too that are geared towards different parts of the shuttle, like the cabin, the workshop, for engineering, the bridge and more. Each advancement will help in its own way so these are definitely things you want to strive for. 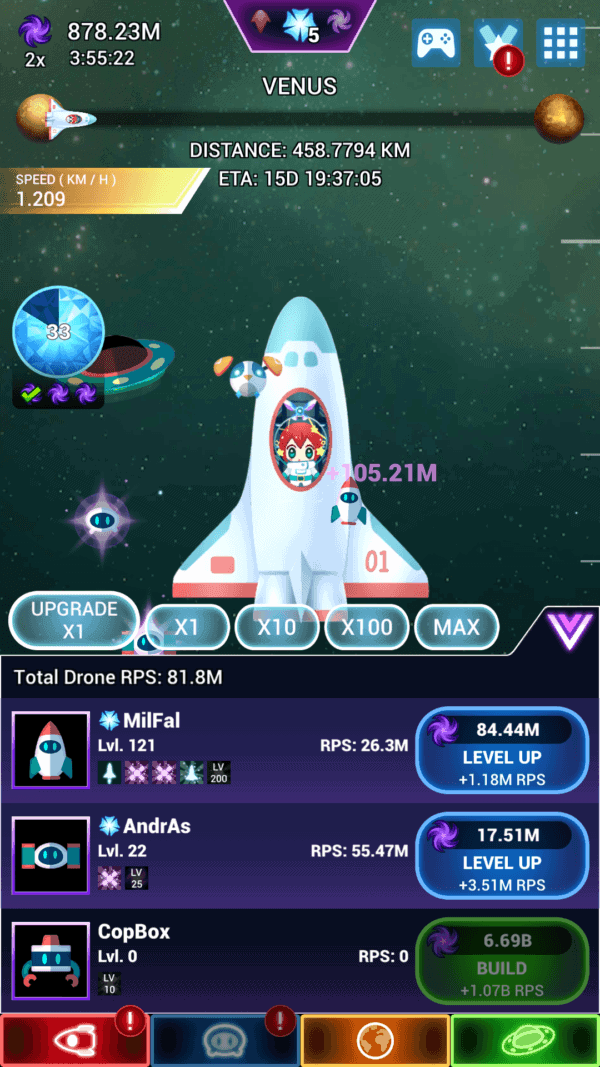 As you level up different things, like the drones and your shuttle attributes, you'll have the option to level up 1x, or speed things up by leveling up by 10x or 100x, or even Max, which will spend all your available resources on one area. Once you get enough multipliers for gathering idle resources, which can come from both your drones and advancement bonuses, it won't be such a big deal to spend the max amount of resources on one thing as you'll gain them back quickly. 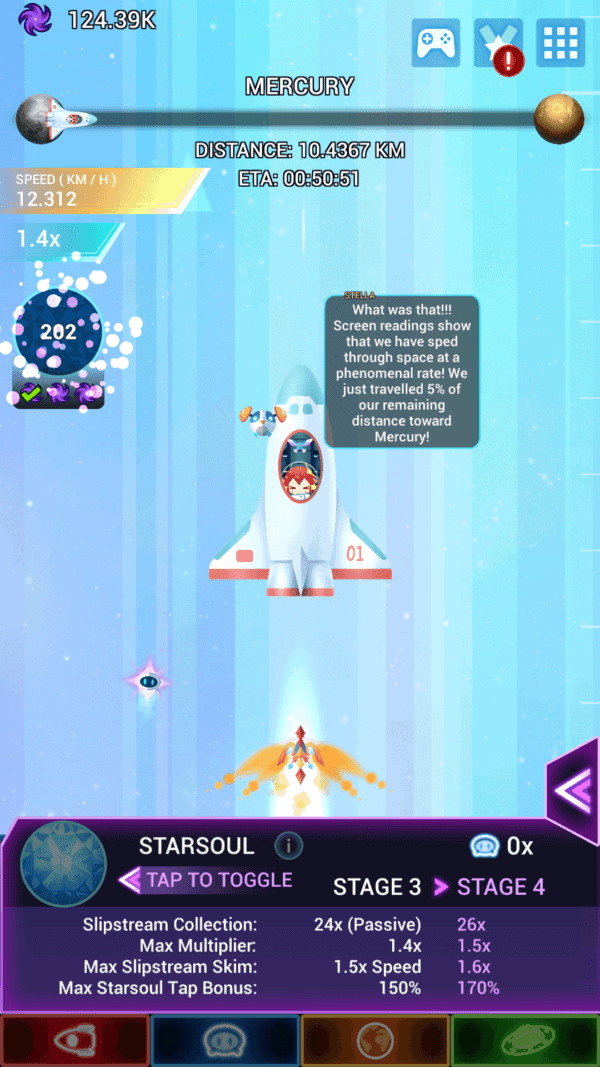 Speaking of drones, there are multiple types of drones you can build to help you in one way or another. The Phoenix Drone for instance, which you can see above hanging in the slipstream of the shuttle, adds a bonuses of +1 to your thruster affinity, but also gives you 200 gems everyday for a 15-day period. Gems can be used to buy things like the Warp ability which speeds up your travel speed by 100,000x taps, and it's only 50 gems to activate it so having the Phoenix Drone can be useful in getting you from place to place a lot faster. 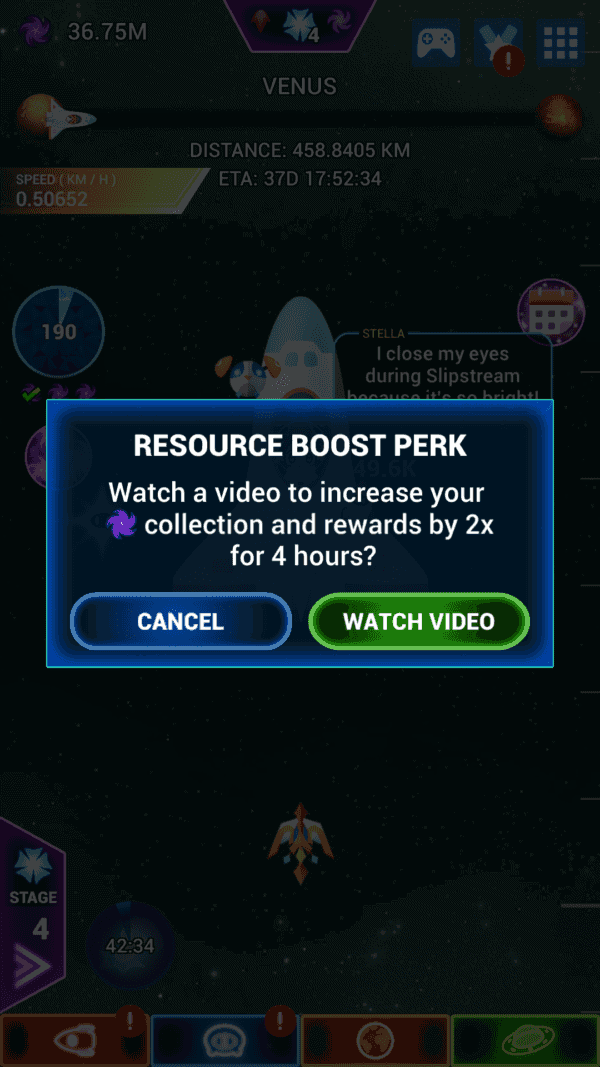 From time to time you will have the opportunity to gain a resource gathering boost by watching a short video. In my experience these don't pop up very often, and the videos are only about 30 seconds in length so they seem worth it for the added boost, as it will double the amount of resources you gather from taps and travel for a period of four hours. 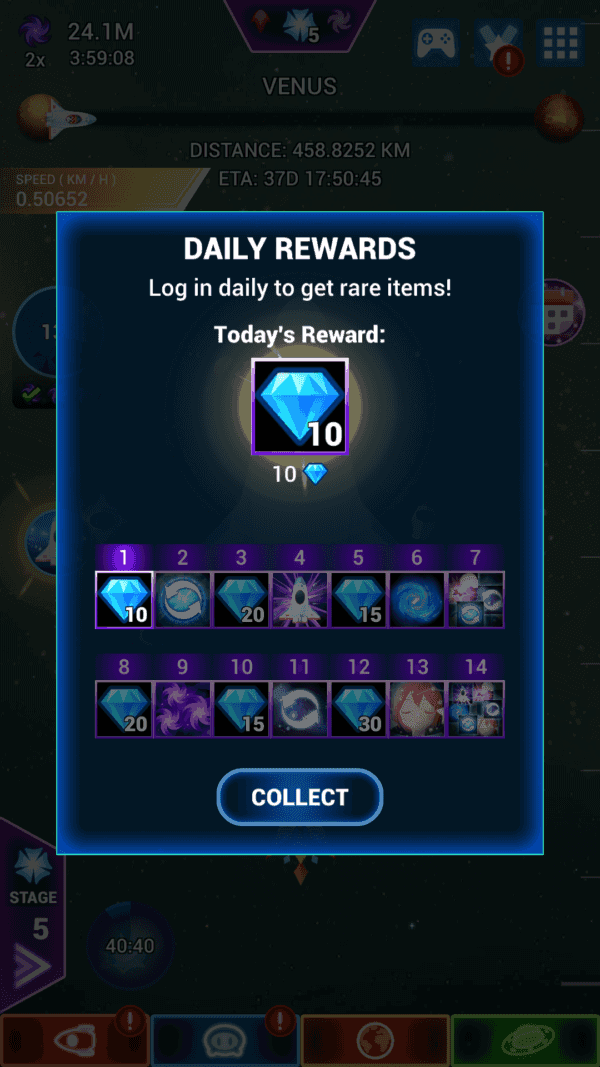 There will also be daily rewards, so as long as you log in daily to play, even if just for a little bit or even just for the login, you will get the reward for that day. This is pretty common with many games across Android, and it's nice benefit for those who are loyal to the mobile games they play as they're an added incentive to keep playing, but also a nice gesture for doing so. 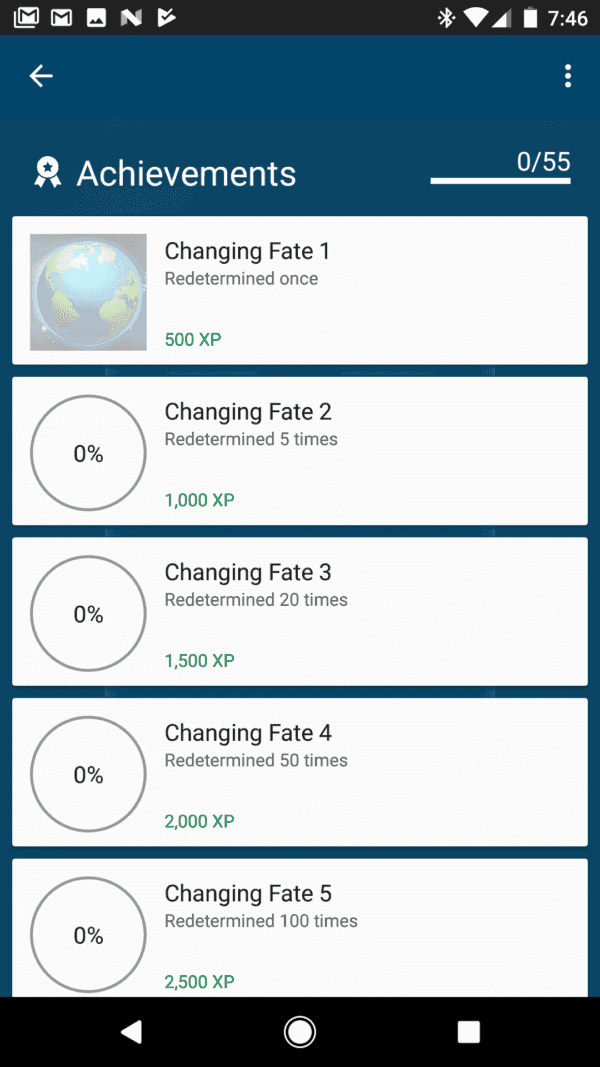 If you're one who loves achievements, then you're in luck as Star Tap offers achievements that can be unlocked. These will range from hitting locations to traveling a certain distance, and will award you a certain amount of XP towards your Play Games level. 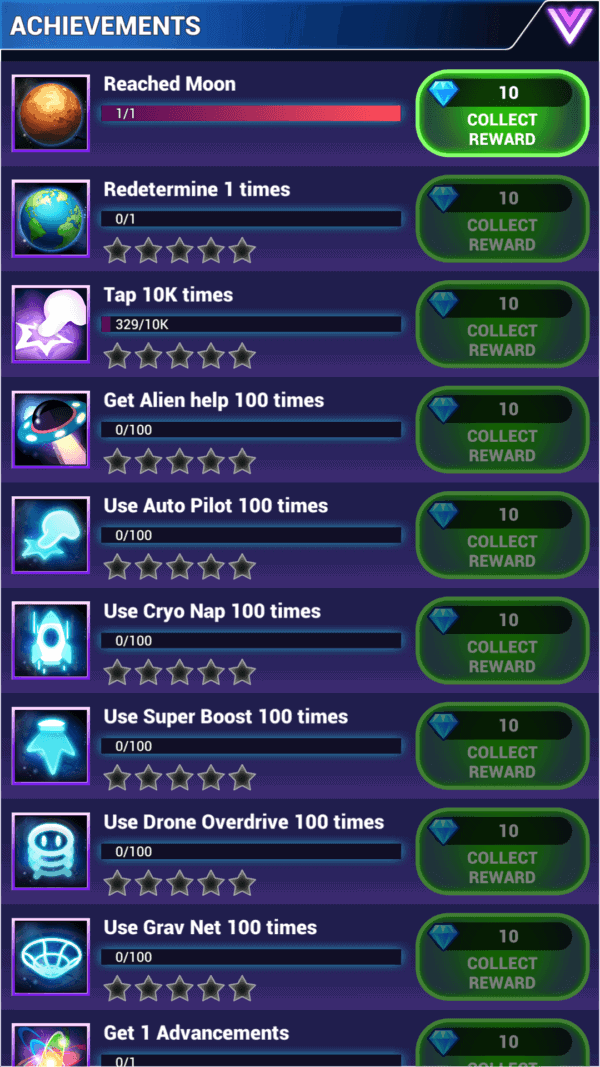 There are also in-game achievements that aren't associated with Play Games that you can acquire, and these will reward you with gems that you can collect and use for boosts. 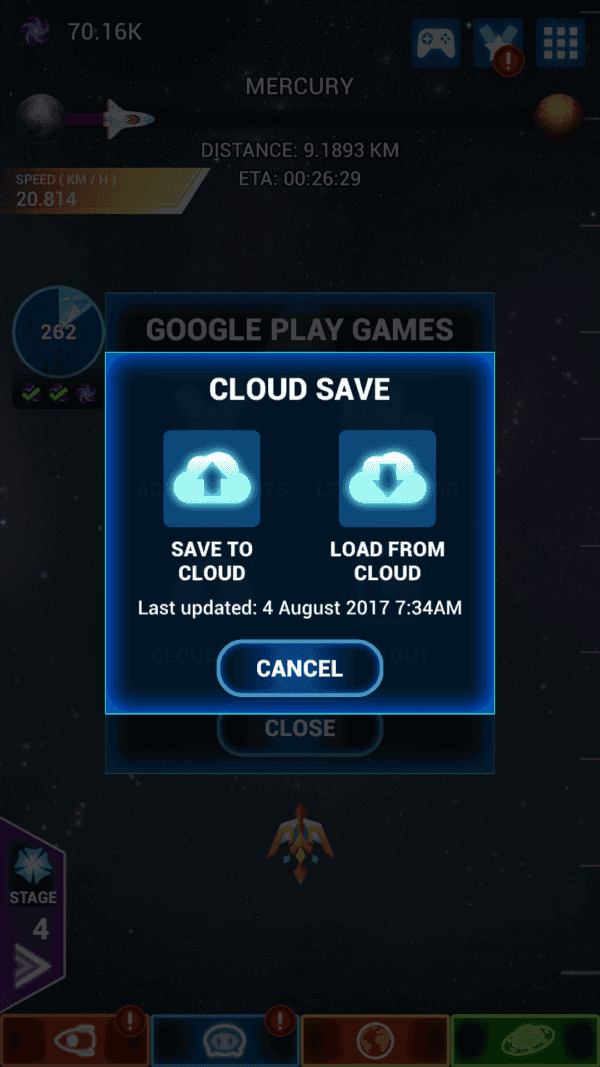 There is also a cloud save feature that allows you to save your data to your Google Play Games account, so if you play the game on multiple devices, or you'd like to, this will be what you need. 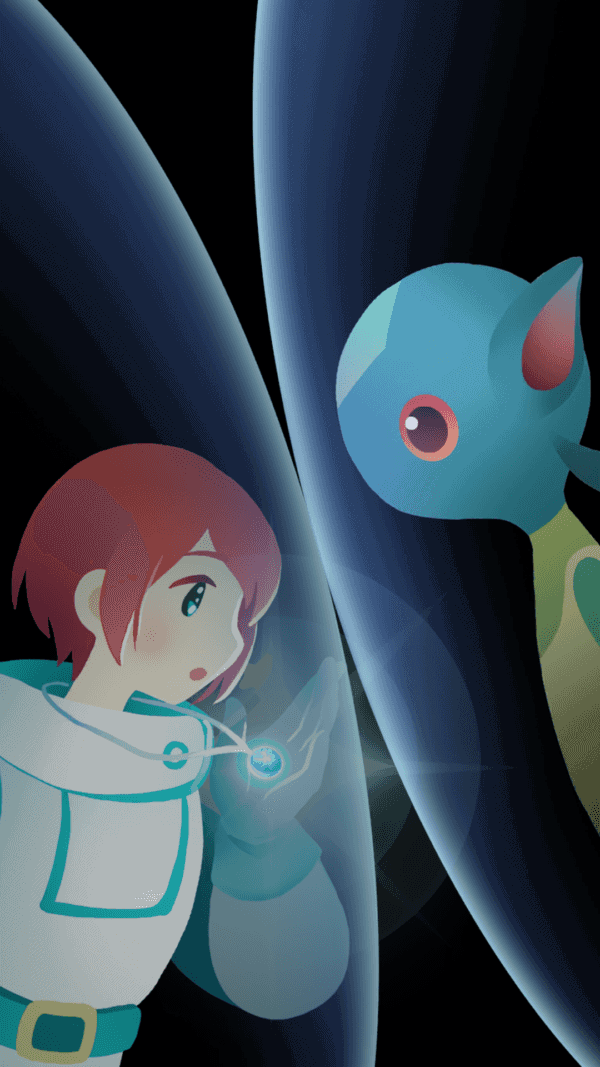 While much of the game will be tapping the screen and casually traveling throughout the universe, there will be story-driven elements involved at various points. These will show up like the image above which use both the art in the images as well as some added text to build up the story more and more as you progress. This helped to keep the game from getting stale. 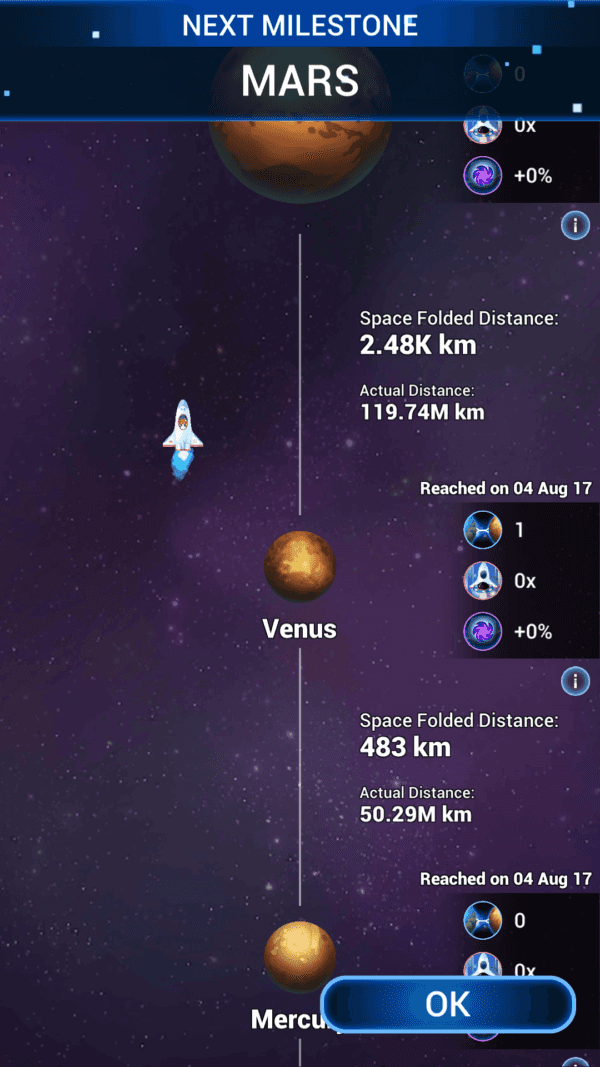 There will also be an option to look at your star map which shows you where you've already traveled, how far each place is, when you reached each location and what abilities or boosts were used. Plus, the game also feeds you interesting facts about planets and such as you explore which is a cool little touch that could be great for keeping kids interested. Overall Star Tap is not just the simple game that it may seem, but it is by no means challenging to play. The ease of use means everyone can get into it and start playing without much of a learning curve, which is great for kicking by a few minutes if that's all you have, or more if you want to see how far you can go in one sitting.

There are games of all types on Android, from mind-bending puzzles to deep and rich RPGs full of life and loveable characters. Sometimes you don't want or don't have the time for a game with such complexities. Star Tap helps you avoid all those things by providing you with a game that can definitely be fun and engaging when you want it to be, but also a kick back and relax experience when you just want to zone out. It's a nice mashup of stuff that helps to steer clicker games away from the bad stigma. Definitely check this one out.