An unannounced Sony device with the model number G8541 has reportedly popped up on GFXBench, with the listing revealing some of its core specifications. The device could come in two sizes, both as a smartphone and a tablet, according to the newly uncovered listing. The latest Android 8.0 Oreo operating system will apparently fuel the software side of things, possibly being the first smartphone to run this particular build of Google’s popular OS out of the box.

The benchmark listing for the Sony G8541 reveals that the device will pack an octa-core Qualcomm Snapdragon SoC clocked at 2.4GHz, paired with 4GB of RAM, Adreno 540 graphics chip, and 128GB of native storage space which may be expandable via a microSD card slot. The smartphone will apparently feature a large 6.2-inch display with a full HD resolution of 1,920 by 1,080 pixels which suggests a regular 16:9 aspect ratio, but the listing also mentions a 12.3-inch display with a 3,840 x 2,160 resolution. Unless the listing is inaccurate, the Sony G8541 may also come in the form of a tablet. Other listed specifications include an 18-megapixel rear camera with autofocus, touch focus, 4K video recording, flash, and face detection, as well as a 12-megapixel selfie cam with 4K video recording capabilities.

The existence of the Adreno 540 GPU indicates that the Sony G8541 might pack the Snapdragon 835 processor, but it remains unconfirmed at this point. The GFXBench listing also reveals a number of other features, including an accelerometer, barometer, Bluetooth, GPS, compass, NFC, gyroscope, proximity sensor, and a pedometer. The device will be of the single-SIM variety, according to the same source. The Sony G8541 could be the rumored Sony Xperia XZ1 Ultra, expected to launch as a successor to the old Xperia Z Ultra that released back in 2013. Sony has yet to offer any official information regarding this device, but it could unveil it alongside the Xperia XZ1 and Xperia XZ1 Compact at the IFA 2017 trade show which is scheduled to officially open its doors on Friday, September 1. Regardless, more details on the mysterious device and its specifications, as well as Sony’s other hardware endeavors should follow in the coming days. 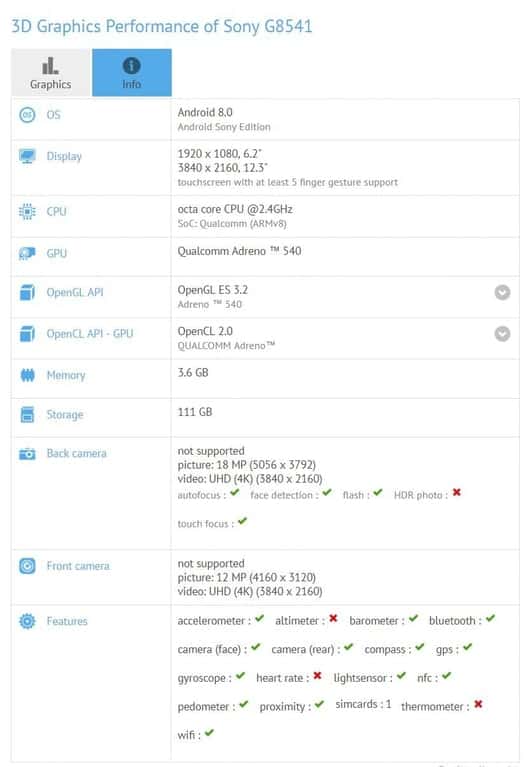