An upcoming Samsung device with model number SM-R600 has been certified by the Bluetooth SIG. While there’s very little information about the actual device on the Bluetooth SIG website, earlier rumors seemed to indicate that it will be a Tizen-based wearable from the South Korean consumer electronics giant. As far as the name of this mysterious device is concerned, reports suggest that it will be marketed as the Samsung Gear Pop, although, there’s no official word on this matter from the company as yet. There’s also no information about whether the SM-R600 is actually a smartwatch or a fitness tracker along the lines of the Gear Fit and Gear Fit 2.

Samsung was originally rumored to launch a device with this exact same model number at the 2017 Tizen Developer Conference last May. However, that launch never quite materialized, so now that the device has received its Bluetooth certification, it will be interesting to see how long it takes for Samsung to make it official. In fact, it will also be interesting to see what it is in the first place. Samsung already has a wide range of Tizen-based wearable devices in its portfolio, so the Gear Pop, or whatever Samsung chooses to name it, will very likely add to that list. It will also be interesting to see if this device turns out to be the reported upcoming ‘fitness smartwatch‘ from the company.

While the overall smart wearables market hasn’t quite done as well as expected the world over, Samsung is one of the very few companies that have somewhat managed to buck the trend, thanks largely to its Gear range of smartwatches and fitness trackers. While the smartwatch market has been exceptionally lackluster, fitness trackers have actually created a bit more of a buzz among mainstream consumers, although, they’ve still got a long way to go to catch up with the ubiquity of smartphones. Whether Samsung, Apple or any other tech company is able to generate any real interest among consumers with something truly exceptional remains to be seen, but that doesn’t seem to be happening any time soon. Either way, it will be interesting to see how this SM-R600 shapes up going forward. We’ll hopefully get more info about it in the weeks to come. 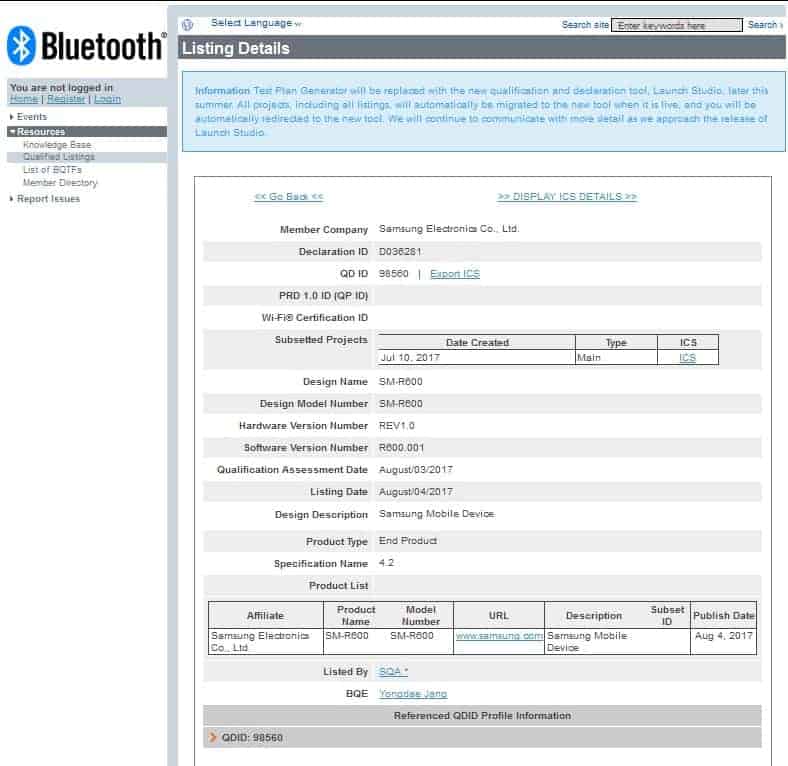