A Samsung Electronics-made device bearing the model number SM-N950F that’s likely the upcoming Galaxy Note 8 was listed in the database of mobile benchmarking tool Geekbench on Friday, with its listing corroborating virtually all rumored specifications that are said to be offered by Samsung’s next Android-powered phablet. The “F” in the designation of this particular variant indicates a device that’s likely intended to be sold in Europe and possibly some other markets, which is further implied by the fact that it’s powered by the Exynos 8895, Samsung’s proprietary system-on-chip (SoC) and the first mobile silicon that the South Korean tech giant manufactured on the 10nm process node.

While Geekbench lists the octa-core SoC featured in the Galaxy Note 8 as being clocked at a maximum frequency of 1.69GHz, that almost certainly only refers to its low-performance core cluster which is meant to be active when the device isn’t under heavy load to preserve battery life. The same chip was found inside the international models of the Galaxy S8 and Galaxy S8 Plus and its high-performance cluster entailed four cores operating at up to 2.3GHz, whereas its energy-efficient cores were clocked at 1.7GHz. By most accounts, those CPU operating frequencies will also apply to the Galaxy Note 8. Geekbench listed the SM-N950F as running Android 7.1.1 Nougat that’s almost certainly paired with Samsung’s proprietary mobile software suite and all models of the Galaxy Note 8 should ship with the same software regardless of their respective markets, though they likely won’t be updated to Android 8.0 simultaneously. The newly uncovered benchmark listing also indicates that the flagship will boast 6GB of RAM, which is in line with previous reports about the successor to the discontinued Galaxy Note 7.

The U.S. variant of the Galaxy Note 8 is expected to be powered by the Qualcomm-made Snapdragon 835 SoC, though it should otherwise be identical to the device sold in Latin America, Europe, and Australia. The base model of the device is rumored to have 64GB of internal flash memory expandable via a dedicated microSD card slot, though the Seoul-based phone maker is also reportedly preparing the Emperor Edition of the handset with 8GB of RAM and 256GB of storage space which likely won’t be available outside of some Asian markets. 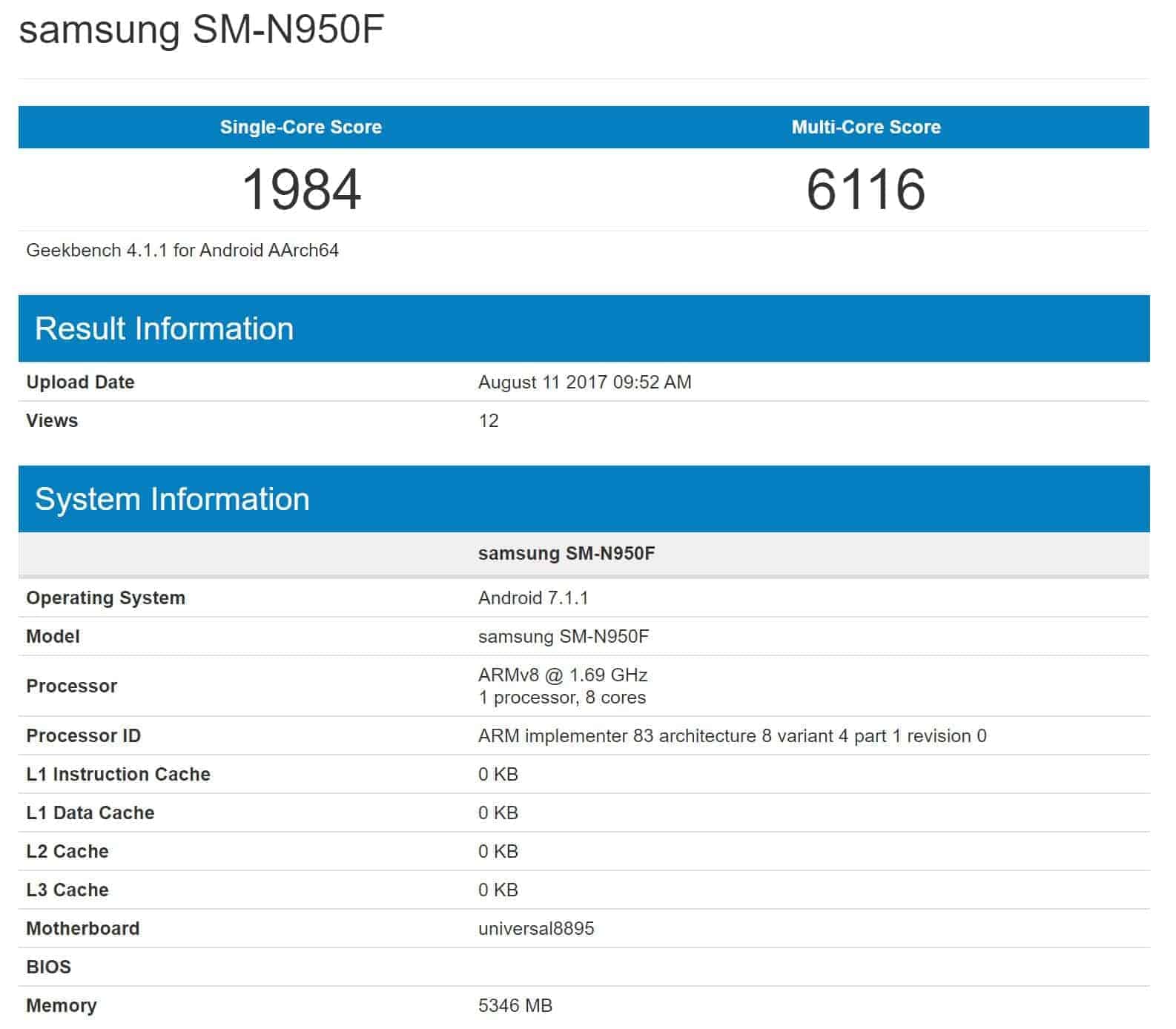