The Samsung Galaxy C7 (2017) has leaked on Geeekbench with a MediaTek Helio P20 processor clocked at 1.69 GHz with 3GB of RAM and 32GB of onboard storage. The benchmark results also display that the device comes running on Android 7.1.1 Nougat. According to the Geekbench listing, the Galaxy C7 (2017) had a single-core score of 865 and a multi-core score of 3,621 in terms of performance. This isn't the first time reports have surfaced of the new mid-ranger. The device passed through TENAA a few weeks back and was also certified by the Bluetooth SIG and the WiFi Alliance.

According to the TENAA listing, the Galaxy C7 (2017 is expected to have a 5.5-inch Super AMOLED display coming in at a resolution of 1080p. The device was also originally expected to be equipped with 4GB of RAM and 64GB of onboard storage, as well as being powered by a Qualcomm Snapdragon 600 series processor clocked at 2.39 GHz, but that no longer seems to be the case as per the Geekbench leak. In terms of the cameras, the Galaxy C7 (2017) is expected to have dual cameras on the rear with a 13-megapixel plus 5-megapixel configuration, and on the front, there will be a 16-megapixel selfie camera. Also, the device's 32GB of internal flash storage is expected to be expandable via MicroSD up to 256GB. Keeping everything on and working is a 2,850mAh battery. To compare to last year's model, the Galaxy C7 (2016) launched with a Qualcomm Snapdragon 625 processor clocked at 2.0GHz coupled with 4GB of RAM with either 32GB or 64GB of storage which was also expandable via MicroSD up to 256GB. Last year's model also came with a 16-megapixel rear-facing camera and an 8-megapixel front-facing camera as well as a bigger 3,300mAh battery.

Since the Galaxy C7 (2017) has already passed through TENAA, it's expected that the device will be sold in China, and thanks to the Bluetooth SIG listing, it is also known that there will be more than one variant of the phone likely meant for other countries and markets, suggesting that it won't just be exclusive to China. Unfortunately, pricing it is not yet known for the device and it's unclear whether or not the Galaxy C7 (2017) will make it to western markets. 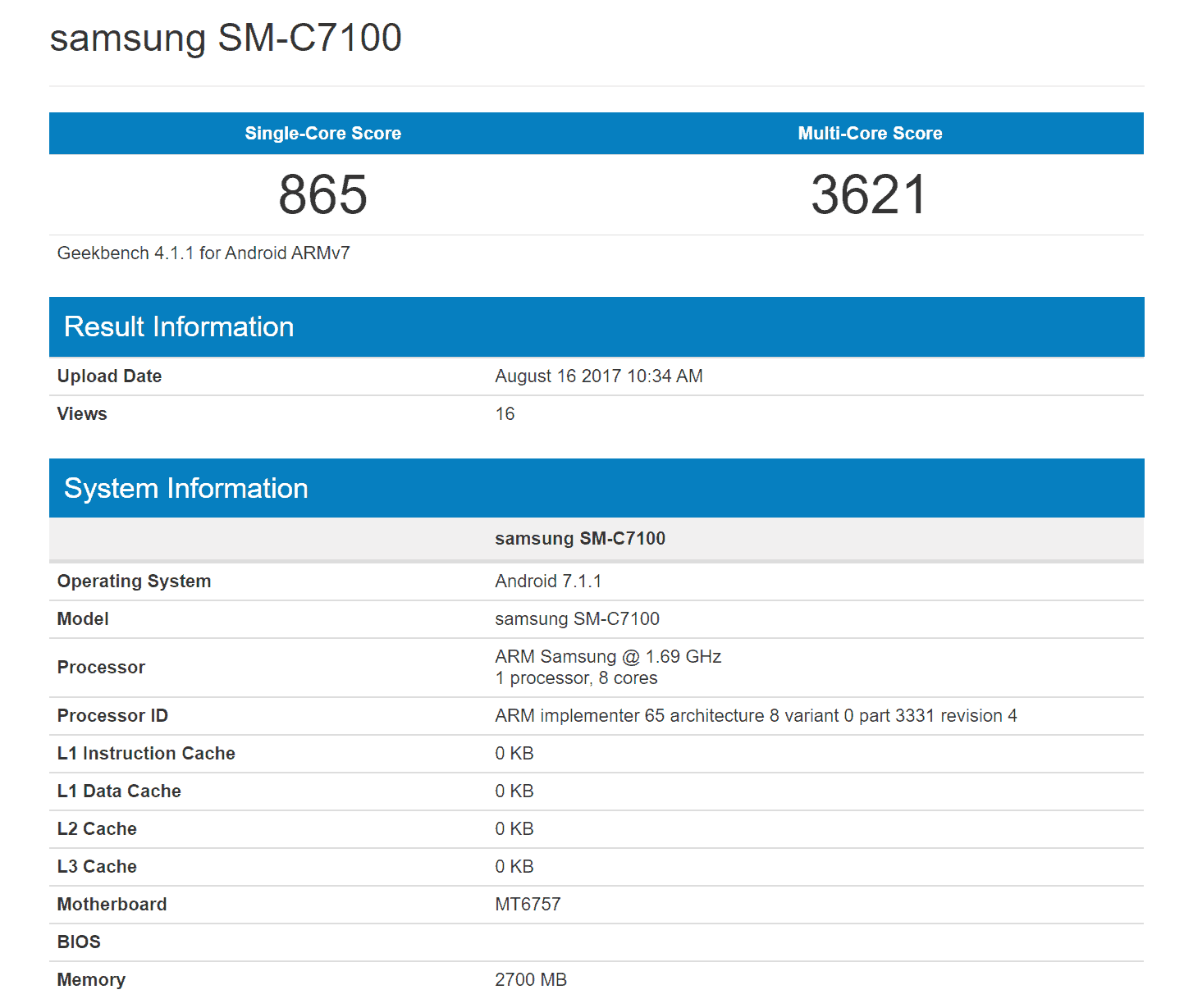