Samsung has begun sending out the first wave of updates containing Android 7.0 Nougat for owners of the Galaxy A7 (2017). For now, the update only seems to be going out to users in Thailand, with that particular variant being labeled as the version A720FXXU2BQGB and weighing in at just under 1.4GB. Rather than rolling out steadily for each territory, it seems to be hitting Thailand all at once, which may mean that Galaxy A7 (2017) owners in other countries can expect the same to happen when the software package comes to their territory.

Along with the usual set of Nougat-related additions, this update will give users a new interface that brings the Galaxy A7 (2017) more in line with its high-end Galaxy S and Galaxy Note siblings. Notifications have been changed, quick settings have been revamped, the full-on settings menu has been remade, and the multi-window functionality is simplified and made more accessible. Samsung Pass is in this update as well, and there have been some tweaks to the Always On Display feature. The Dual Messenger functionality seen in the Nougat update for the Galaxy J (2017) lineup also comes with this software package, allowing owners to use two different social network and IM accounts per app. Obviously, this update means that all of the themes in the Samsung store that were made for Nougat devices like the Galaxy S8 can be used now. All of the usual caveats with updates apply here; make sure that your device has at least 50 percent of battery left or is plugged in and do not turn the phone off for any reason during the installation.

The Galaxy A7 (2017) came out in January and shipped with Android 6.0.1 Marshmallow. Its 5.7-inch screen is set to a resolution of 1,920 by 1,080 pixels and hides the Samsung Exynos 7880 Octa processor under it, alongside 3GB of RAM. The phone features 32GB of internal flash storage and a microSD card slot that supports up to 256GB of additional memory. The back camera of the phone is a 16-megapixel unit with an f/1.9 aperture, and a similar unit sits on its top bezel. The whole package is powered by a 3,600mAh battery which can be fast-charged through a USB Type-C port. 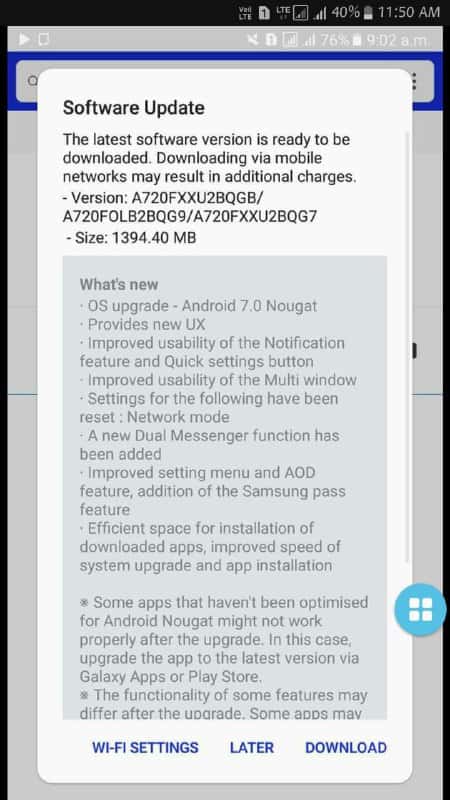