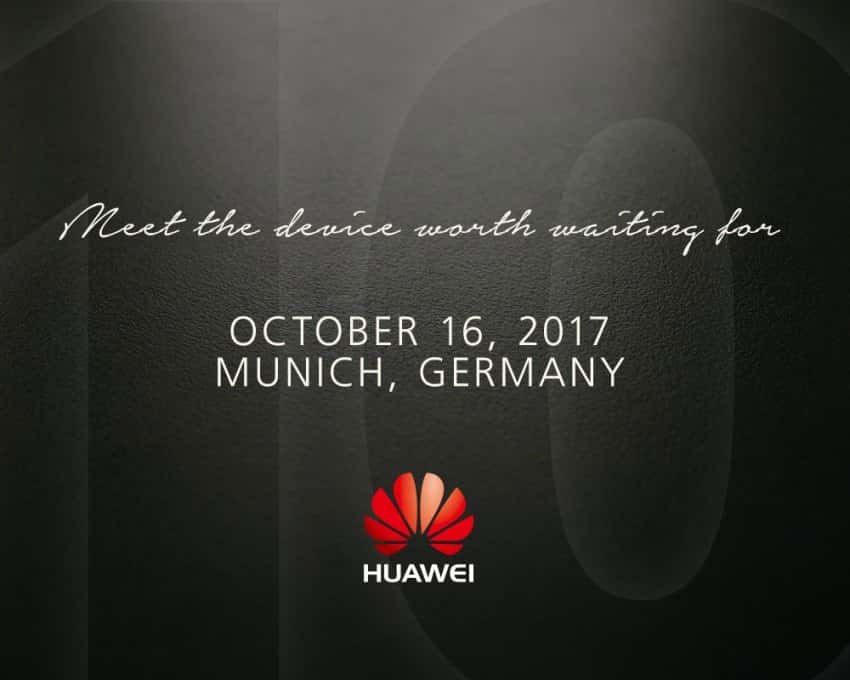 It is becoming increasingly likely that Huawei's upcoming flagship, the Huawei Mate 10, will launch at an event that will take place on October 16, 2017. Aside from the date, the latest report on the matter claims that the unveiling of the smartphone will be held in Munich, Germany. The rumor is substantiated by a potentially official promo for the smartphone that can be seen above and appeared on the Internet earlier this week. The material shows the date and venue alongside the logo of the Chinese tech firm and the slogan "Meet the device worth waiting for." In the background, a large number ten is visible, likely pertaining to the Huawei Mate 10. It has been previously reported that the unveiling of the device, along with the smaller Huawei Mate 10 Lite, will take place on the said date, although this is the first time that the original rumor was substantiated with something more than a claim. The Huawei Mate 9 that precedes the upcoming device was launched last November.

The Huawei Mate 10 has been leaked repeatedly over the past few weeks; it is rumored that the device will sport a 6.1-inch edge-to-edge display with an aspect ratio of 18:9 which will be produced by panel manufacturer Japan Display Inc. It is also expected that the Huawei's own HiSilicon Kirin 970 chipset will be included in the smartphone. This SoC will be clocked at between 2.8GHz and 3.0GHz and will be built using the 10nm process node technology, insiders previously said. The chipset is anticipated to incorporate a more powerful GPU and a Category 12 baseband LTE Modem. The latter specification means that the handset is potentially capable of 3x carrier aggregation, 256-QAM, and 4×4 MIMO antenna configuration, all of which would result in a massive jump in data speeds experienced by the user. In addition, a 3D sensing technology for augmented reality applications will be supported by the Mate 10, according to recent reports.

The Mate 10 will launch with Android 8.0 O and Huawei's EMUI, insiders previously said, adding that the original equipment manufacturer is likely to price the device at over $700 in most markets. More details on the Mate 10 and Mate 10 Lite are likely to follow in the coming weeks.