A possible variant of the rumored Xperia XZ1 Compact reportedly appeared on Geekbench earlier this week, having been tested and listed as the Sony G8441. That same model number was already sighted online on several occasions in recent times and has also appeared in the database of mobile benchmarking tool AnTuTu last month, with that previous listing being largely in line with the phone’s latest Geekbench appearance.

According to the listing that can be seen below, the Sony G8441 is equipped with 4GB of RAM and the “msm8998” motherboard which is used with the Snapdragon 835, Qualcomm’s most powerful system-on-chip (SoC) to date and also the first silicon that the San Diego, California-based semiconductor company ever manufactured on the 10nm process node. The chipset powering the possible Xperia XZ1 Compact is clocked at 1.9GHz, according to Geekbench, though that particular metric may only refer to the operating frequency of its power-saving cluster since Qualcomm’s eight Kyro 280 cores can otherwise reliably work at up to 2.45GHz. While original equipment manufacturers (OEM) usually downclock Qualcomm’s chips to a degree, it remains to be seen if the one powering the possible Xperia XZ1 Compact will truly be as limited as its Geekbench listing indicates. The Sony G8441 was tested while running Android 8.0, likely the fourth Developer Preview of Android O that Google released in late July with near-final system images. If Sony’s previous product practices are any indication, the device will come with only a slightly modified version of Android enhanced with some additional features and a light overlay.

According to previous reports, the Xperia XZ1 Compact may ship with a 4.6-inch display panel with a resolution of 1,280 by 720 pixels and be powered by a 2,800mAh battery. Coupled with the flagship SoC that’s already proven itself as being extremely energy-efficient, the device should offer plenty of life on a single charge. It may also be the first Android smartphone to be announced as running Android 8.0 out of the box seeing how the Japanese consumer electronics manufacturer is widely expected to debut the G8441 and at least one more handset in the run-up to this year’s iteration of IFA Berlin which starts on September 1. 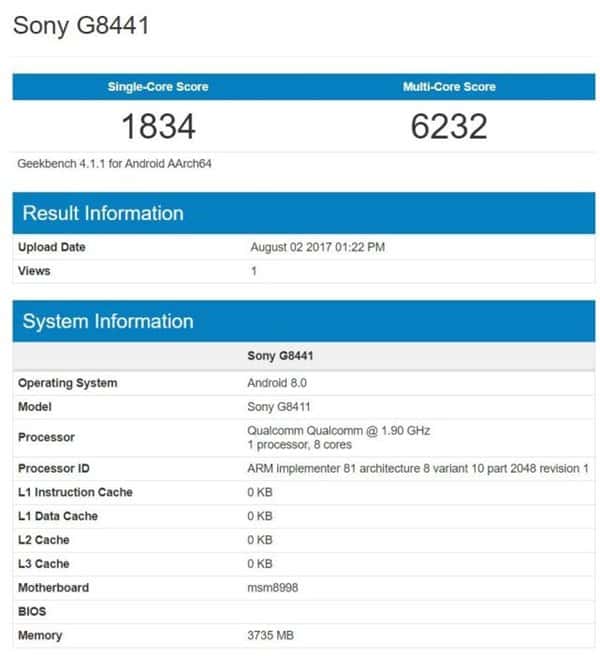