Today, the LG G6 takes on the HTC U11 in a battle that promises to be a fairly close one. While the former is the latest flagship smartphone from South Korean consumer electronics major, LG Electronics, the latter is Taiwanese tech company HTC’s all-new premium smartphone that was released just a few short weeks ago. However, even though both the devices were released this year, LG’s offering is actually powered by a chip from last year, while the HTC handset comes with the very latest Qualcomm SoC under its hood. On paper, the HTC U11 is already a couple steps ahead of its Far East-Asian rival, but is that enough for it to emerge on top in today’s comparison? Let’s find out! 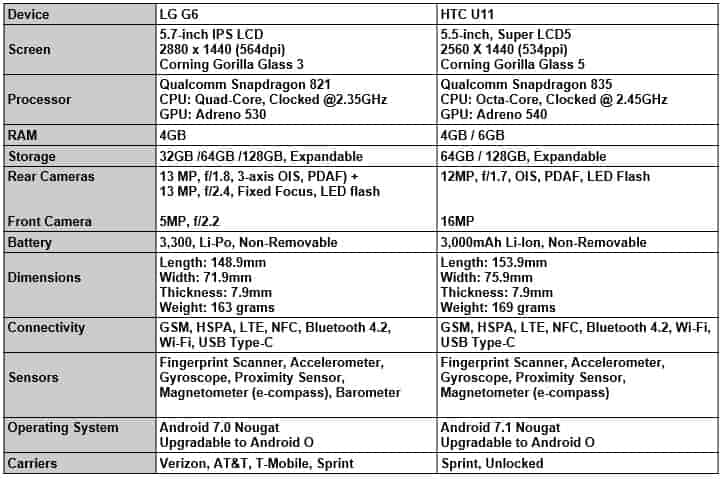 The LG G6 is is a perfectly-designed premium smartphone and ticks all the right boxes in terms of aesthetics, build quality and performance, but what really makes it extremely lucrative is the price-tag that’s significantly lower than what we’ve come to expect from the company. The device features a 5.7-inch IPS LCD QHD+ (2880 x 1440) display panel with an unusual 2:1 aspect ratio that the LG marketing department refers to as 18:9. It is powered by the Qualcomm Snapdragon 821 SoC that has an integrated quad-core application processor with two cores clocked at 1.6GHz and another two running at a maximum of 2.35GHz. The SoC also includes the Adreno 530 GPU for graphics. The handset packs 4GB of DDR4 RAM and either 32GB, 64GB or 128GB of native storage that’s expandable via a microSD card of up to 2TB in capacity.

The LG G6 comes with a dual-camera setup on the back, with the primary 13-megapixel sensor paired with an f/1.8 lens that has 3-axis OIS and PDAF, and is supported by a dual-tone LED flash. The additional rear-camera also comes with a 13-megapixel sensor, but it features a wide-angle 125-degree fixed focus lens with an f/2.4 aperture. However, the two cameras operate independently of one another, and users have the option to choose which sensor to use for which shot. On the front, the G6 offers a 5-megapixel sensor mated to an f/2.2 lens. While the rear-facing camera module can shoot 2160p videos at 30fps and 1080p videos at up to 60fps, the front-facing selfie-cam can only do 1080p videos at 30fps.

The device also comes with a front-facing fingerprint scanner, but unfortunately, does away with the IR Blaster that could be found on its predecessor, the G5. However, the 3,300mAh battery is one area where the G6 is a definite improvement over the G5 that came with a paltry 2,800mAh battery, apparently, to accommodate its modularity. You also get Quick Charge 3.0, thanks to the Snapdragon 821. The LG G6 measures 148.9 mm in length, 71.9 mm in width and 7.9 mm in thickness while weighing in at 163 grams. In terms of software, the handset ships with Android 7.0 Nougat and is expected to receive Android O going forward. The device is also one of the few smartphones apart from the first-generation Pixel phones to ship with Google Assistant out-of-the-box.

The one thing that needs to be mentioned while listing the features of the LG G6, is that the device comes with a whole bunch of different configurations for different markets, so while Qi wireless charging is a U.S.-specific feature that isn’t available elsewhere around the world, the much-hyped 32-bit Quad DAC is exclusively available in South Korea and a few other countries in Asia. FM Radio is also one such feature that’s only available in a few markets. Also different is the amount of native storage on offer. While the company offers a 64GB version of the phone in South Korea, Hong Kong, India and a few of the CIS nations, the North American market originally only got the 32GB version. However, the company has since rectified that anomaly by announcing the LG G6+ that comes with 128GB of storage, alongside the Hi-Fidelity Quad DAC audio and Qi wireless charging in all markets. 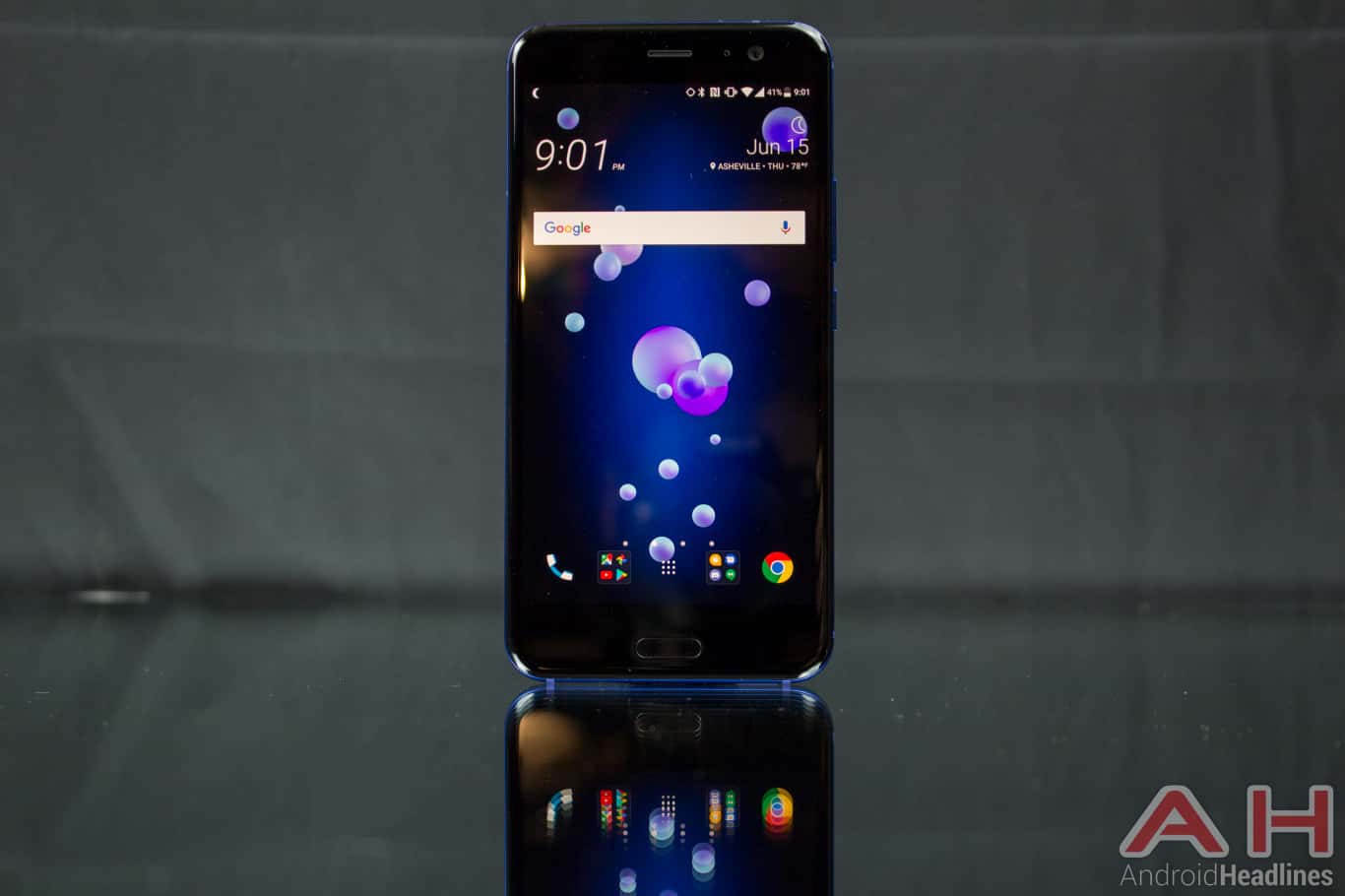 The HTC U11 comes with high-end hardware components and some really neat software features, but the first thing you notice is the so-called ‘Liquid Surface’ design that gives the latest HTC flagship a distinctive look. The device follows the distinctive design language of earlier HTC launches like the U Ultra and U Play that saw the company switch from a metallic exterior to glass panels on the back. Unlike its rival in today’s contest, HTC has stuck to the traditional 16:9 aspect ratio for the display panel on the U11, with the fingerprint scanner integrated into the physical Home button, as seen on earlier HTC handsets. So unlike the LG G6, the HTC U11 looks less like a revolution and more of an evolution in terms of its design.

In terms of hardware, the device features a 5.5-inch WQHD (2560 x 1440) Super LCD5 capacitive touchscreen display that’s protected by Corning’s Gorilla Glass 5. It is powered by the Qualcomm Snapdragon 835 SoC and ships with either 4GB of RAM and 64GB of internal storage, or 6GB of RAM and 128GB of internal storage depending on the variant. Both versions support microSD cards of up to 256GB in capacity. Photography options on the HTC U11 include a rear-facing 12-megapixel primary camera with the company’s proprietary UltraPixel 3 and UltraSpeed Autofocus technologies. The camera comes with a 1/2.55-inch sensor, and has a lens with an f/1.7 aperture. Other features include phase detection autofocus (PDAF), optical image stabilization (OIS) and a dual tone LED flash. Software features include geo-tagging, touch focus, face detection, HDR and panorama. The camera can record 4K videos at 30fps and 1080p videos at up to 120fps. The front-facing selfie-cam on the HTC U11 is a 16-megapixel unit that can record 1080p videos at 30fps.

HTC’s latest premium smartphone comes with an USB Type-C port for charging and data syncing, but like many of its competitors, ditches the 3.5mm audio port. The handset ships with a 3,000mAh Li-Ion battery with support for Quick Charge 3.0, while sensors include a front-mounted fingerprint scanner, accelerometer, gyroscope, proximity sensor and magnetometer (e-compass). The HTC U11 measures 153.9mm in length, 75.9mm in width and 7.9mm in thickness, while weighing in at 169 grams. The device also comes with an IP67 certification, denoting resistance from dust and water. In terms of software, the HTC U11 comes with Android 7.1.1 Nougat pre-installed and, is one of the very few devices to run as many as three different voice-based personal assistants: Amazon’s Alexa, Google’s Assistant and the company’s own Sense Companion.

While the HTC U11 comes with quite a few remarkable features, the most novel one has to be the so-called ‘Edge Sense’ that allows users to squeeze the sides of the device to interact with the phone. The device supports both long and short squeezes, and users can customize exactly what can be done with each squeeze. By default, it launches Google Assistant with a long squeeze and fires up the camera with a short one. However, Edge Sense is customizable, so users can change what the squeezing does, which means you may assign any other app to your squeezes according to your choice. The company is expected to enhance the functionality of the feature even further in the future by pushing through an update that will enable users to assign different functions to each squeeze, depending on the app they’re in. HTC has already demoed some of those new features that are expected to hit the device sooner rather than later. 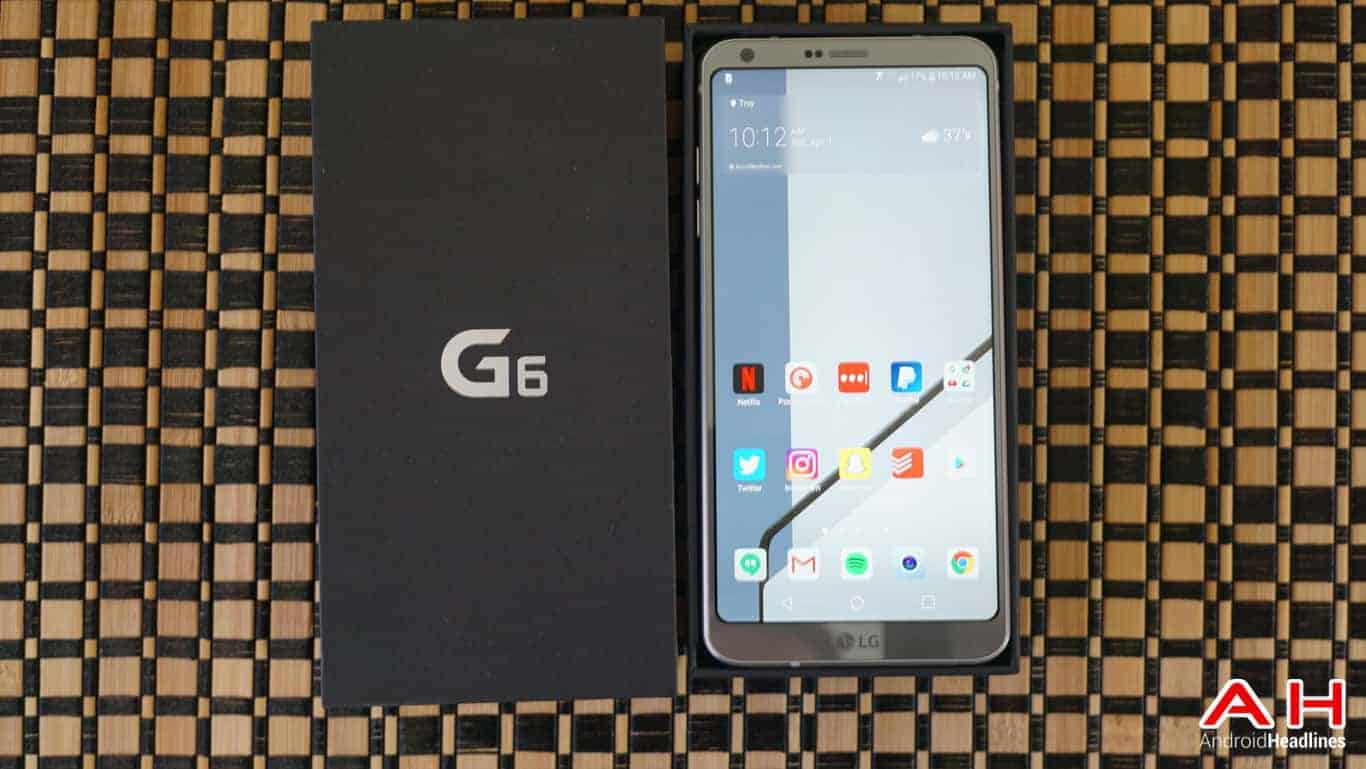 The result of this comparison once again proves that specifications alone do not necessarily make great gadgets. Make no mistake, the U11 is an extremely good smartphone with great looks, smooth performance and some very innovative features, but HTC’s implementation of all of that in one single device left a bit to be desired. That doesn’t mean you’ll actually regret your purchase decision should you choose to buy it now, but there are better options available in the market at similar prices, and the LG G6 is a classic case in point. Sure, the LG G6 doesn’t have the same processing power that the HTC U11 does, but it still performs every task admirably, which is understandable when you consider that the chip powering the handset is actually newer and faster than one that powered most of the top flagships from last year, including the Galaxy S7. If cutting-edge hardware is all you’re looking for, the HTC U11 may make some sense, but otherwise, the LG G6 is simply the better all-round device that also happens to come with a sensible price-tag, which is why it wins our head-to-head today.

Buy The LG G6 Buy The HTC U11
Advertisement