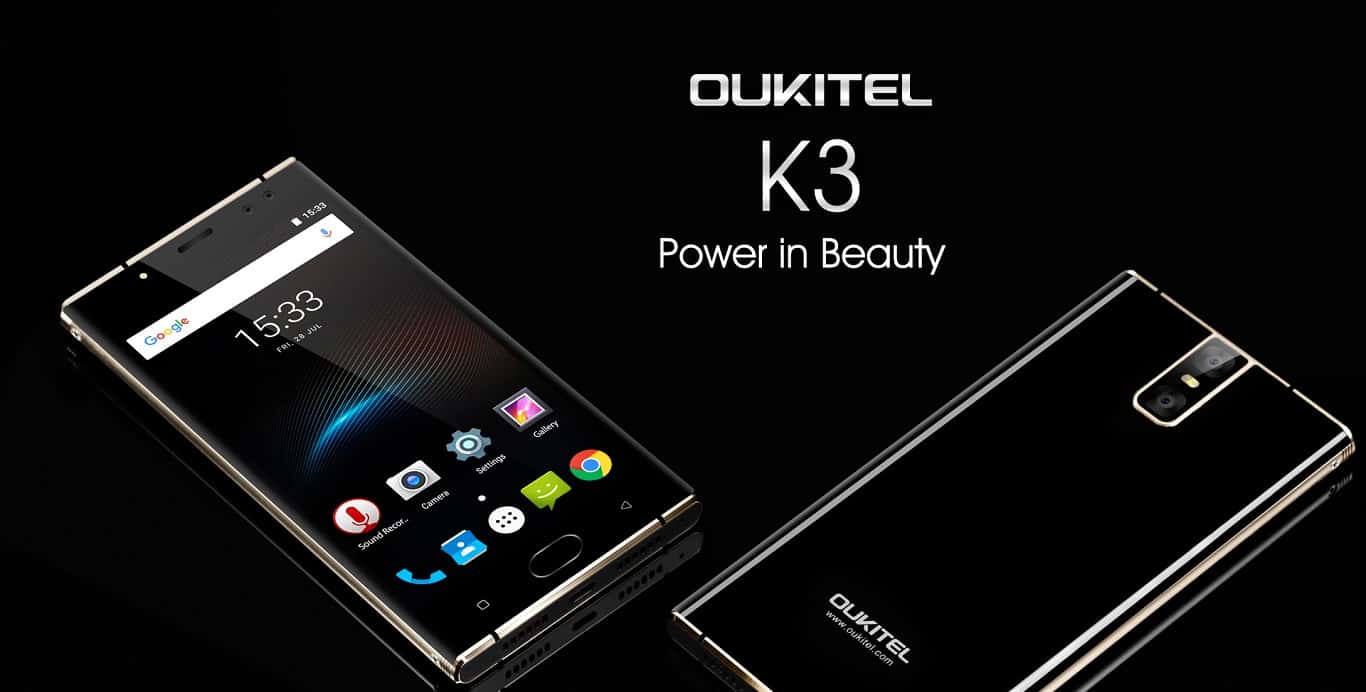 The OUKITEL K3 is a new smartphone from OUKITEL and one that has been gaining attention lately. Largely due to this being a smartphone that comes equipped with a number of clear selling points, in spite of the expectation that it will be available at a very competitive price. Now, OUKITEL has confirmed the specs and features that are on offer with its latest smartphone arrival. Including confirming previous reports that not only is this a battery-focused smartphone, but also one which comes equipped with four cameras.

In terms of the design, it had been previously made clearly that OUKITEL was designing the OUKITEL K3 with a symmetrical approach in mind. Something which is now evident in the provided image, along with the general understanding that the OUKITEL K3 is designed to be an attractive 'big battery' smartphone. As for the main specs, the OUKITEL K3 is now confirmed as featuring a 5.5-inch display along with a 1920 x 1080 resolution. Inside, the OUKITEL K3 comes loaded with 4GB RAM, 64GB internal storage, and is powered by a MediaTek 6750T octa-core processor (clocking at 1.5 GHz). In terms of cameras, the OUKITEL K3 comes loaded with a dual rear camera configuration, spearheaded by a 13-megapixel main camera and backed up by a secondary 2-megapixel camera. While on the front there is another dual camera configuration, again spearheaded by a 13-megapixel camera and backed up by a 2-megapixel secondary camera. Additional features worth noting include the option to expand the storage when needed (up to 64GB), a 6,000 mAh battery, 4G LTE support, a fingerprint sensor, and Android 7.0 (Nougat).

In terms of availability, while the company has yet to provide exact details on pricing or when the phone will be available to buy, OUKITEL has confirmed that the OUKITEL K3 will be released in two different color options, 'Bright Black' and 'Sapphire Blue.' Along with announcing that those who wish to be kept informed on the release of the OUKITEL K3 can do so by signing up through the link below. As well as checking out a newly-released promotional video which looks to further detail the design benefits on offer with the OUKITEL K3.

Advertisement
More info: OUKITEL K3
Trusted By Millions
Independent, Expert Android News You Can Trust, Since 2010
Publishing More Android Than Anyone Else
6
Today
52
This Week
52
This Month
3225
This Year
104704
All Time
Advertisement