The internal hardware of the Nokia 9 has been detailed after being listed on the website of popular benchmark application AnTuTu. The model tested using the aforementioned benchmark carries the model number TA-1052, which is also among the devices recently listed on the GFXBench website. According to the AnTuTu Benchmark, the device currently named as the Nokia 9 will likely sport the Snapdragon 835 chipset from Qualcomm, which is manufactured using the 10nm process node technology, and is Qualcomm’s current flagship processor which is fueling a number of flagship smartphones out there, like the Galaxy S8, for example. The said chipset incorporates eight 64-bit cores, which are grouped into four high-performance cores clocked at 2.45GHz and another four power-efficient cores clocked at 1.9GHz. The Adreno 540 GPU is also included in the chipset.

The AnTuTu benchmark listing also notes that the device will have a display with a resolution of 2560 x 1440. While the benchmark did not identify the screen size of the handset, it has been previously rumored that the smartphone may sport a 5.7-inch display. The Nokia 9 will sport 64GB of internal flash storage and 4GB of RAM, although the benchmark did not state whether the internal storage of the device can be expanded by a microSD card. AnTuTu listing also states that the device will have a 13-megapixel shooter at the back and another 13-megapixel camera at the front. A recent GFXBench listing of the handset has also noted that the device may sport a single rear camera, which is interesting since recent renders and leaks of the Nokia 8 have shown that the flagship offering of HMD Global will sport dual rear cameras.

The Nokia 9 will have Android 7.1.1 Nougat installed. HMD Global, the manufacturer of Nokia-branded smartphones, decided to retain most of the features of stock Android while only implementing slight changes to the aesthetic of the operating system. The handset is also IP68 certified for water and dust resistance. The confusion regarding the naming and the specifications of the Nokia-branded flagship handset will likely be clarified on the device’s launch, which could take place on August 16. The handset will likely be priced at around $500 once launched. 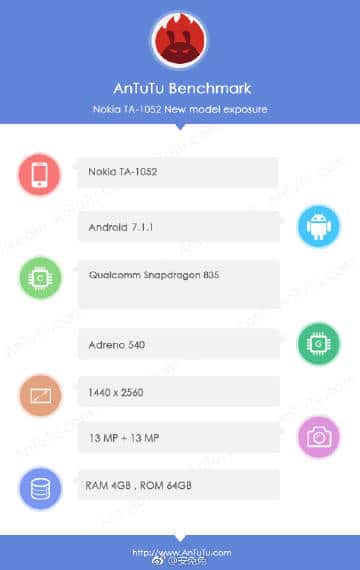