Nest has a big announcement set for September 20th as the company sent out invites earlier this afternoon to a press conference on that day. The invite doesn’t specify what the press event is for, but Nest has already unveiled the new Nest Thermostat E, which is a cheaper option compared to the standard Nest Leaning Thermostat, and also comes with a more simplistic design. With that in mind, Nest’s big announcement may not have anything to do with another new thermostat, though it is entirely possible that the company will be announcing the latest version of the standard thermostat model as the currently available option (the 3rd Gen. model) was launched quite a while ago and could be due for an upgrade.

Thermostats aren’t the only thing that Nest offers, as it also sells home security Wi-Fi cameras and a Smoke +CO alarm, though a new camera option was just launched earlier this year, so the announcement is unlikely to include a new camera device. At the moment, about the only thing known about what Nest has to unveil is that it will have something to do with home automation, whether that’s a new partnership, a new product, or new features for existing products. This is in addition to the date and time of the event.

The press conference is happening in San Francisco at 9AM PST, and while the invite doesn’t seem to mention anything in regards to what is being announced, it does have some wording that states “Popcorn? Check. Comfy Couch? Check. Big Announcement? Check.” This may or may not be a hint at what Nest has to unveil, and more than likely it’s nothing more than a way for Nest to tell people that they should grab a bucket of popcorn and get comfortable for the big announcement. If anything, that may suggest that what Nest has to announce will be something exciting, which could point to a new hardware product of some kind, but as mentioned above the announcement could also be about new features or a partnership that has Nest working on a new project. It could really be anything at this point even though Nest isn’t in the habit of releasing a ton of different products. In any case, in just a few short weeks Nest will end up sharing its big news. 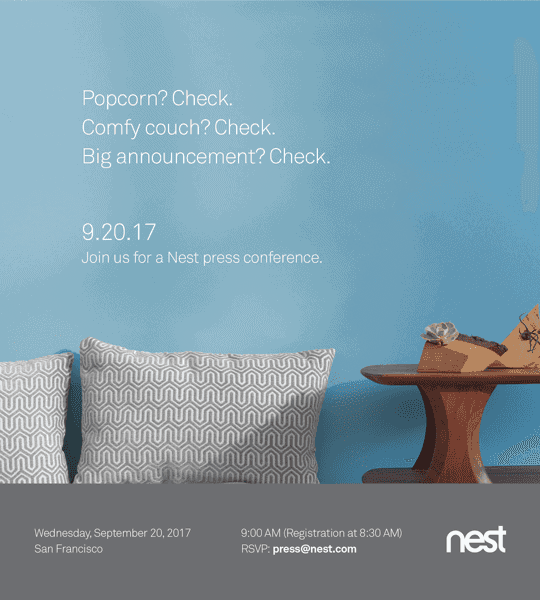