The LG V30 is expected to be made official at LG’s press conference in Berlin just days ahead of IFA – the annual fall trade show that takes place in Berlin, Germany. LG has already started announcing some of the features of the LG V30, for example, it is now confirmed that the device will feature a 6-inch P-OLED display, which would mark the first that LG has used an OLED display since the G Flex and G Flex 2 smartphones. Now while there are plenty of leaks and rumors already floating around about the LG V30, there’s still plenty that is unknown, but here’s everything that we do know. 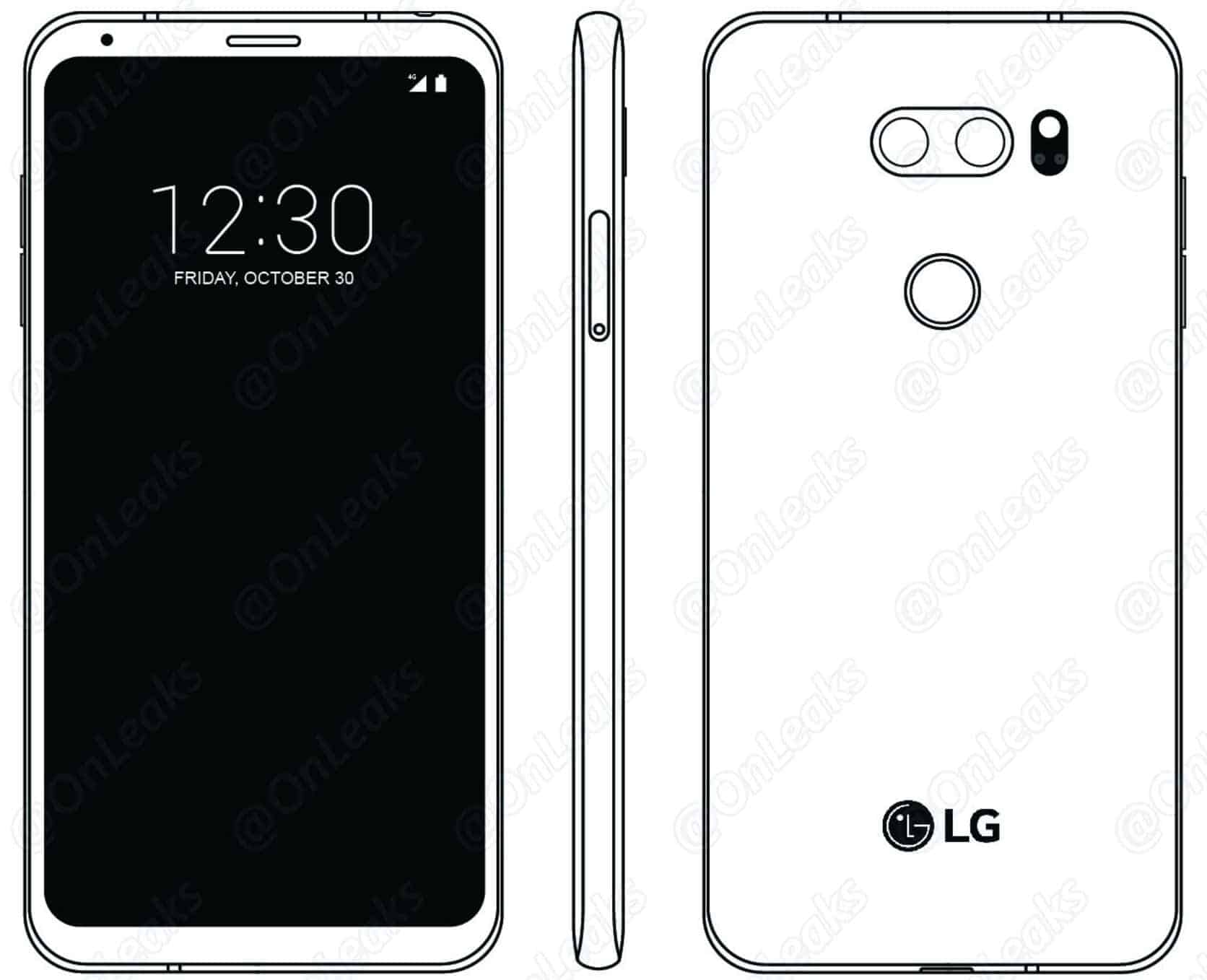 This should come as no surprise, but it’s expected that the LG V30 will look similar to the LG G6 that was announced earlier this year. LG is sticking with the FullVision display that it used on the G6, which has a 18:9 aspect ratio display. That means the LG V30 will have a larger display, but have the same footprint. Additionally, the LG V30 will likely have a bit more rugged design than the LG G6, which was already rugged even though it didn’t look like it.

With the LG V30, you can expect that LG will keep the fingerprint sensor/power button on the back side of the device, and have a dual-camera setup as well. That setup has worked well for LG in the past few years, especially with that wide angle camera on the back. 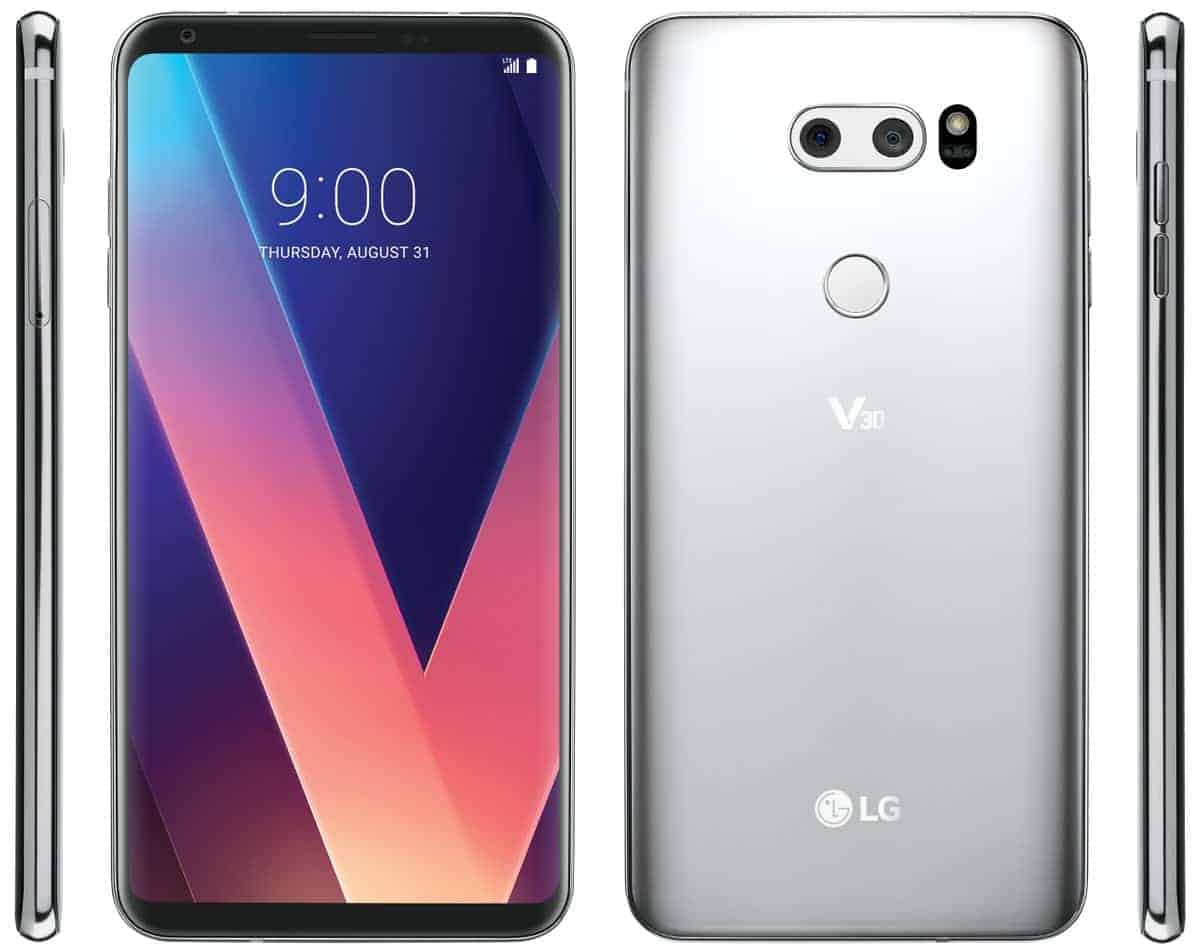 The most recently leaked render of the LG V30 gives the best possible look at the phone so far, showing off the device from the sides, front, and back, while also displaying the best view of the device’s screen with minimal bezels. 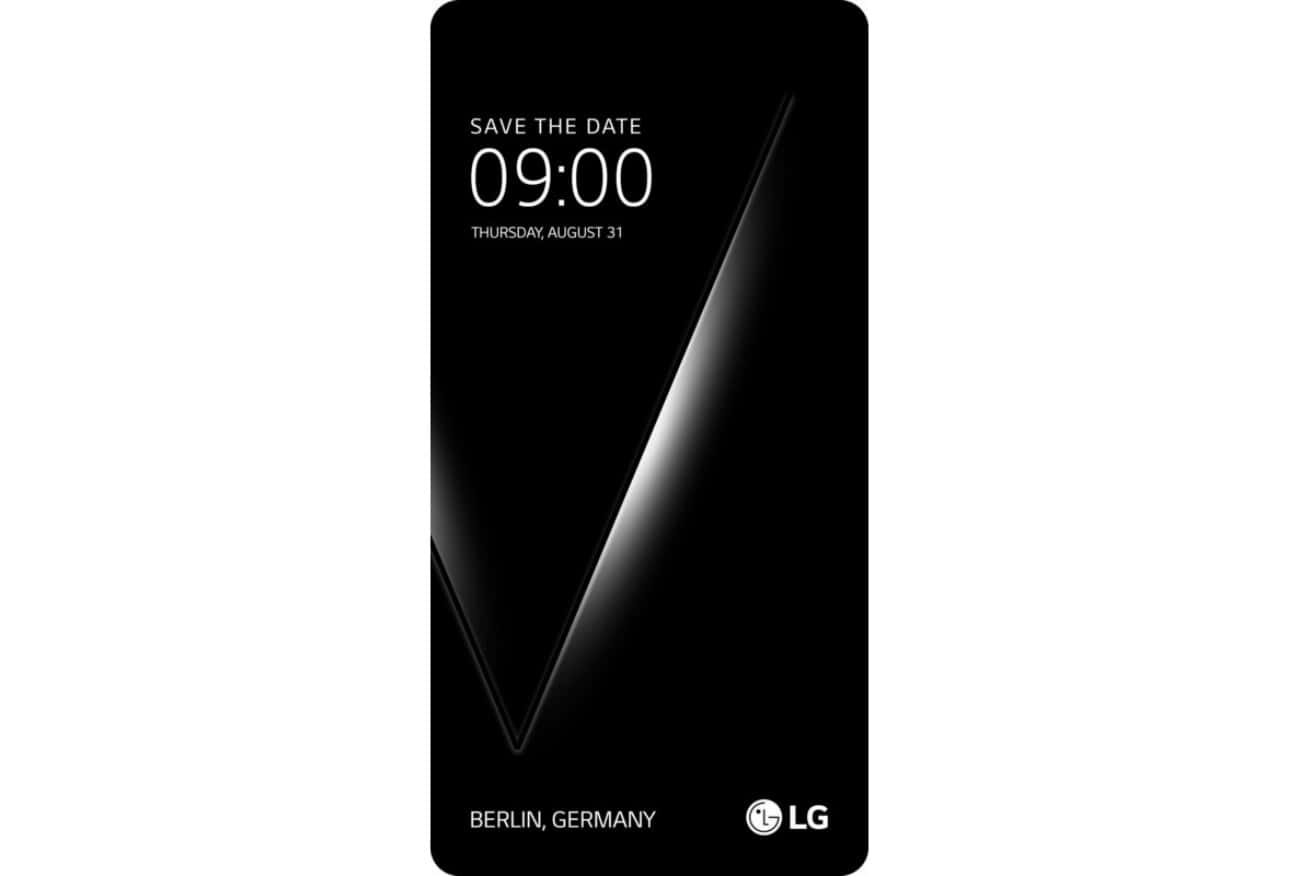 As was already mentioned, LG has confirmed that the V30 will have a 6-inch P-OLED display which makes the device a bit interesting. P-OLED is a material that isn’t used often, LG used it on the G Flex and G Flex 2 which were phones that could be bent. Now Motorola uses P-OLED on the Moto Z2 Force, which has a shatterproof display. So it’ll be interesting if LG does go back to using a flexible display or does make it shatterproof, or if it does something else. Having a shatterproof display is arguably better than having a display that can be bent, especially when it comes to being ruggedized.

It’s widely expected that LG will be using the Snapdragon 835 inside the LG V30, which would make it the first Snapdragon 835-powered device from LG. Since the LG G6 did use the Snapdragon 821 earlier this year, and that was due to the Snapdragon 835 not being ready in time, and LG not wanting to wait a few months to release that device. On top of that, it’s also expected that it’ll have 4GB of RAM and 64GB of storage. Now storage is a bit of speculation here, and even though the LG G6 did have 32GB of storage – except for in Asia where it got 64GB – the LG V20 last year did have 64GB of storage. So it would be odd for LG to essentially downgrade the storage on the LG V30, compared to its predecessor. And with all the competition launching with 64GB of storage, it would make sense to stick with that. 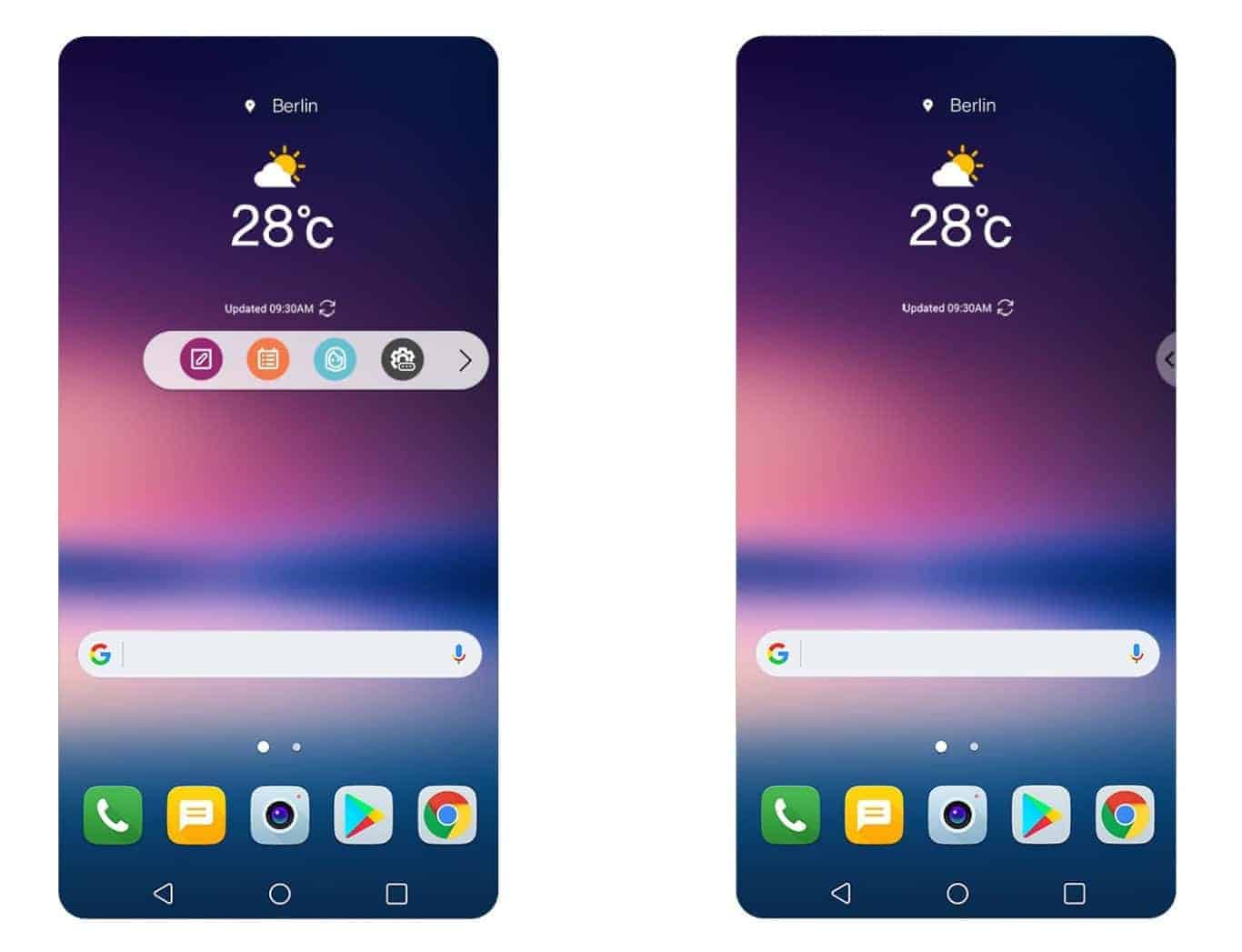 One would expect the LG V30 to launch with the latest version of Nougat, Android 7.1.1. But where Android O is launching in August, it is possible that the LG V30 would be the first with this new version of Android, similar to the LG V20 last year with Android Nougat. Now, so far, this seems unlikely since LG isn’t touting the fact that it has the first device to have Android O. But that could always happen. Otherwise, you can expect a refreshed version of LG’s skin (still technically called “OptimusUI” even though it dropped the Optimus branding quite a few years ago).

Now, there is a rumor floating around out there that LG will debut a “Floating Bar” on the LG V30. That may not be the feature’s name when it debuts though. But it does sound a lot like the features Samsung uses on its devices with curved displays. And judging by the recent render that appeared online, it’s possible that this could be a curved screen device from LG. And that would make plenty of sense. LG is also ditching that second screen that the V10 and V20 both had. That also makes sense since the display is going to be extra tall, and leave virtually no bezel to add that second screen.

Earlier in the week a screenshot of the LG V30’s UX leaked out, showing the rumored floating bar that is said to be partly replacing the use of the secondary screen that was found on the LG V20 and the LG V10.

A leak from today not only gives a look at part of the UX, but also shows one of the wallpapers that users will have access to on the device once it launches. While this is just a wallpaper, it’s an interesting view at the process that goes into making an item like this. 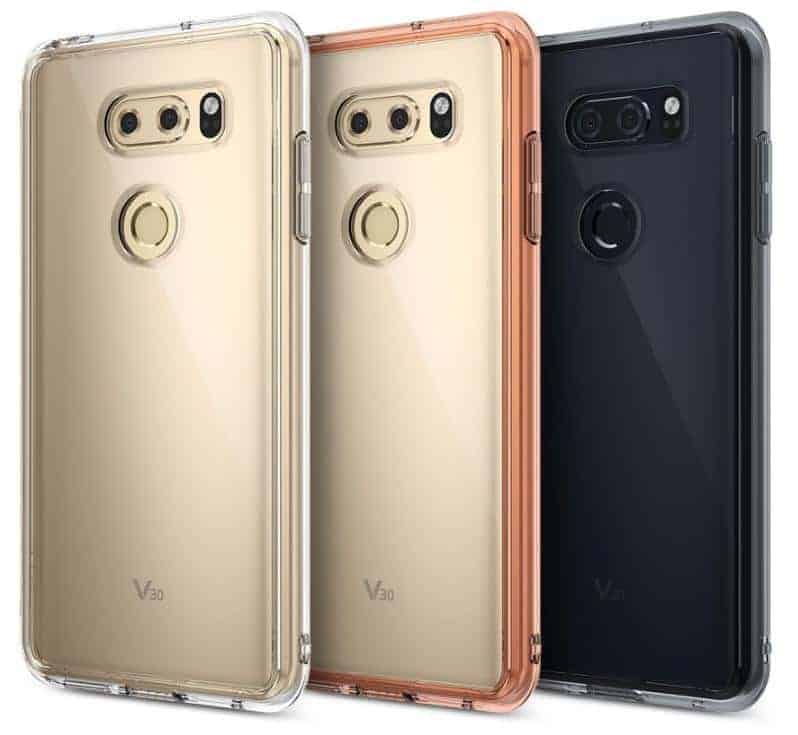 Case makers have already started “leaking” cases for the LG V30, with a generated dummy unit inside the case, which shows that the LG V30 looks very similar to the LG G6. Again this is not surprising at all. Of course these pictures need to be taken with a grain of salt, since case makers do get the dimensions for the LG V30 and other devices, to make these case, they do not get pictures of the device. So these cases do vary slightly and some may come out looking exactly like the LG V30 and others will look vastly different. 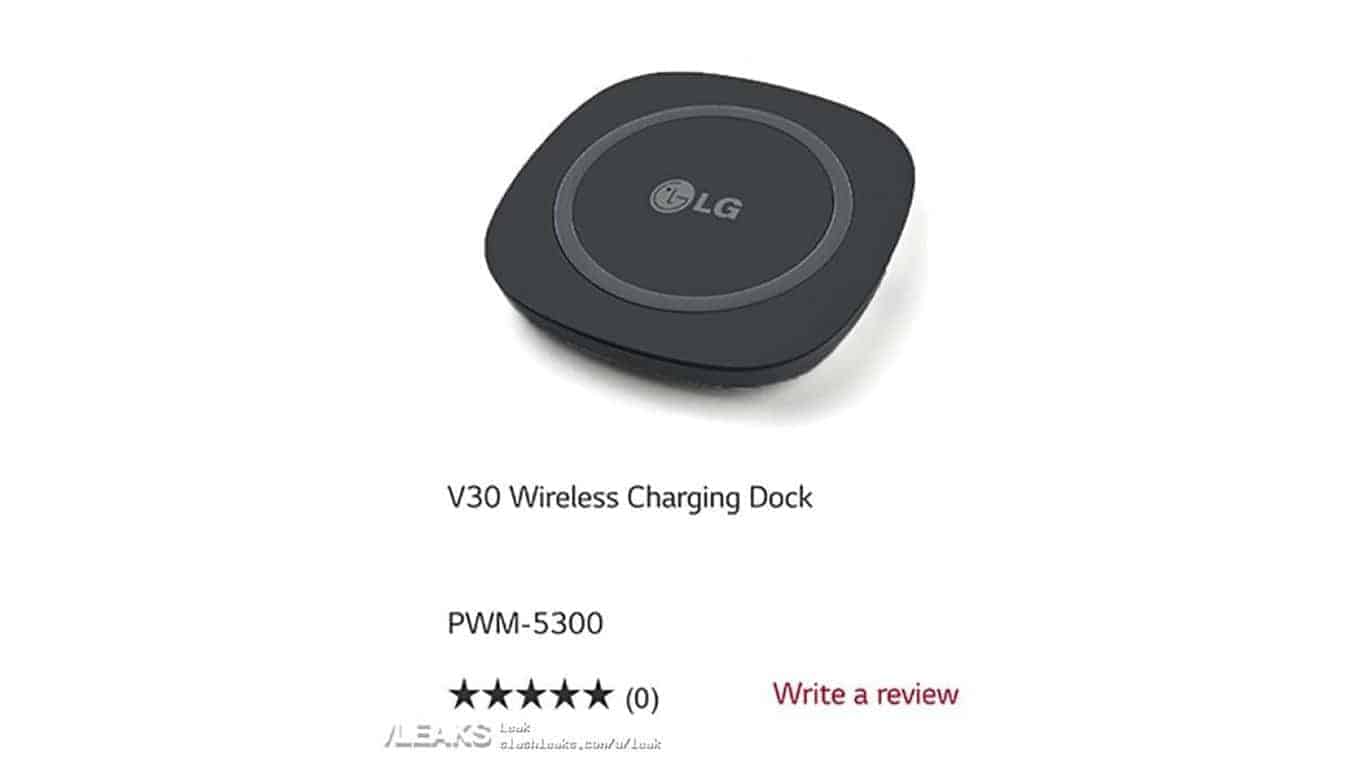 While not exactly a case, a wireless charger is an accessory and just recently the wireless charging dock for the LG V30 leaked on LG’s official website. it was taken don rather quickly, but not before some screenshots were captured showing that it was going to be available.

Availability is a bit of a tough one to talk about right now. But expect the device to launch on all four US carriers – and likely US Cellular as well. It’ll likely be in the $700+ ballpark, putting it above the price of the LG G6, but perhaps cheaper than the Galaxy Note 8 from Samsung which it will be competing with pretty heavily. The device will likely launch in September, since the unveiling isn’t until August 31st in Berlin. LG usually launches its devices around 3-4 weeks after the launch event, so it could be a late September or early October availability this year.

Last week, it was rumored that the LG V30 would be launching alongside the LG V30 Plus, a slightly more powerful version of the phone that may come with a few extra features.

There’s already been plenty of leaks and rumors about the LG V30, and it’s shaping up to be a pretty good device from LG. However, it will be facing some very steep competition from the Samsung Galaxy Note 8 and the Apple iPhone 8 as well as the other smartphones announced at IFA with the V30 and after IFA – like the Pixel 2 from Google. So it does have a tall order to fill. However, we’ll know everything about the LG V30 come August 31st.