The Huawei P10 Plus in Bright Black has just been launched in China where the latest color variant of the smartphone is already available for purchase and can be bought from online stores affiliated with Huawei, including Vmall, JD.com, Suning.com, and Tmall. The handset is retailing for 4,888 Yuan ($734), identical to the other variants of the Huawei P10 Plus. While the Chinese electronics manufacturer already introduced a black version of the device in the form of Graphite Black, the Bright Black is slightly different as it comes with a glossy finish, whereas the original one had a matte texture. The Chinese firm will likely make the phone available in other Asian markets in the coming months as it has a huge presence in the region and rarely releases China-exclusive color variants.

While the Bright Black Huawei P10 Plus is a new color offering, the internals of the device remains identical to other variants. Its specs include a 5.5-inch LCD display with a resolution of 1440 by 2560 pixels, Huawei’s own HiSilicon Kirin 960 octa-core chipset equipped with the Mali-G71 GP, 6GB of RAM, and 128GB of internal storage which is expandable by up to 256GB via a microSD card slot. For optics, the Huawei P10 Plus comes with a dual camera setup on its rear panel entailing a 20-megapixel monochrome sensor and a 12-megapixel RGB module, both of which were manufactured by Leica and are assisted by a dual-LED (dual tone) flash. Selfies are handled by an 8-megapixel shooter, also from Leica’s workshop. The Huawei P10 Plus is equipped with a 3,750mAh battery which supports fast charging and isn’t removable.

Software-wise, the Huawei P10 Plus comes with Android 7.0 Nougat out of the box, along with EMUI 5.1 on top of it. EMUI 5.1 is the latest version of Huawei’s very own mobile user interface which the company has been maintaining for years now. The physical Home button housed by the bottom bezel of the smartphone doubles as a fingerprint sensor, and up until now, the P10 Plus was available in eight colors: Graphite Black, Dazzling Gold, Moonlight Silver, Rose Gold, Prestige Gold, Greenery, Dazzling Blue, and Arctic White. 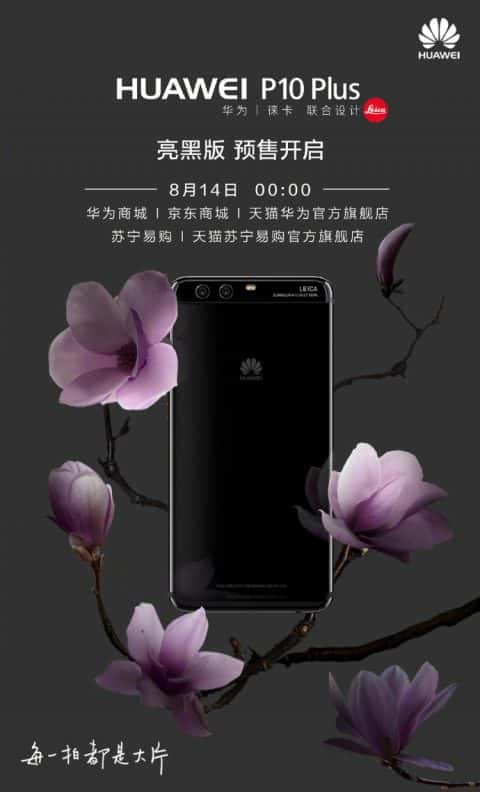