The massive demand for the Galaxy S8 and Galaxy S8 Plus is said to be the main factor that helped the Seoul-based consumer electronics manufacturer maintain its dominance in the global smartphone market, albeit it consequently increased the average selling price (ASP) of its offerings. The company’s latest flagship duo achieved notable commercial success due to a wide variety of reasons, including its unconventional design that allowed it to stand out from its competitors. Samsung also committed significant resources to marketing its premium handset series in an effort to bounce back from the Galaxy Note 7 fiasco that didn’t prevent most of the firm’s previous customers from purchasing its new devices, the latest data suggests. The highly anticipated Galaxy Note 8 is likely to additionally strengthen Samsung’s foothold in the global smartphone market, Strategy Analytics claims.

The second largest phone vendor in Q2 2017 was Apple with an 11.4 percent market share, followed by Huawei which accounted for 10.7 percent of all handset shipments in the quarter. OPPO and Xiaomi held 8.2 and 6.4 percent of the market, respectively, with the latter experiencing the largest quarterly growth out of all the major OEMs in the industry, growing its business by 58 percentage points year-on-year. The remaining phone vendors accounted for 41.3 percent of the global handset market in Q2 2017 whereas they held 46.5 percent in Q2 2016, with this particular metric indicating that the big five is further extending its lead over smaller OEMs even as the industry as a whole continues to grow and consumers in developing countries are buying their first smartphones. Samsung is expected to continue dominating the global market by a significant margin in the coming quarters and Apple is unlikely to lose its second spot despite the presently close gap between the Cupertino, California-based tech giant and Huawei; most industry watchers agree that Apple will significantly improve its performance once the iPhone 8 series is released this fall. 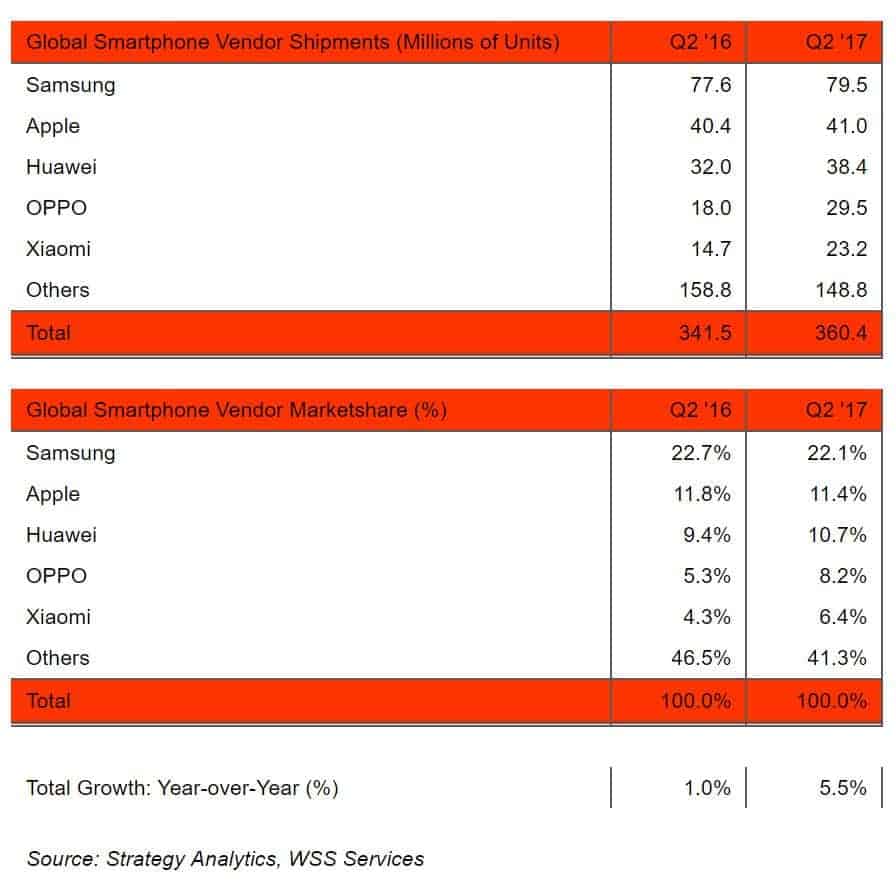