By 2019, almost 15-percent of consumers in the US aged 18 and over will own a smartwatch. This is the latest prediction being made by market research firm NPD Group which states that smartwatch ownership in the US is expected to increase by as much as 60-percent by 2019. To put this into perspective, the same report notes that as of June 2017, 9-percent of US consumers aged 18 or older owned a smartwatch. Which was in turn, a 1.5-percent increase compared to six months before.

The report draws on data obtained from more than 5,000 consumers who took part in the NPD Group’s ‘Connected Intelligence Wearables Survey.’ Based on that data, one of the reasons that is being attributed to the growth between now and the end of Q4 2018 is the variety of features that are expected to be present on new smartwatches from major manufacturers. The report specifically draws on aspects like the ability to control music, the ability to command a connected device to take pictures, and a greater level of home automation integration, as aspects that will fuel growth in the smartwatch sector. With the report noting that between 15 and 21-percent of smartwatch owners already make use of these features.

In addition, the report also picks up on millennials as being the current driving force between smartwatch adoption, noting that this demographic has seen penetration levels of 13-percent, compared to 9-percent for the market overall. While also suggesting that there are signs to suggest that smartwatches are becoming more mainstream. One example of this is that 34-percent of those surveyed on an income lower than $45,000 per year, owned a smartwatch. Something which is thought to be in spite of smartwatches being more expensive compared to other related products. With another example coming from the ratio of men to women who now own smartwatches, with the report detailing that the gap between the genders has closed significantly, now representing a 60-percent (male) to 40-percent (female) split. As such, the report also notes that past reports and headlines which have suggested the smartwatch sector is undergoing tough times have been premature. With the current data suggesting the industry is growing at a solid rate and certainly one which is ‘healthy’ considering the age of the market in general. Below highlights the hierarchy of features currently used by smartwatch owners, based on the data obtained by NPD. 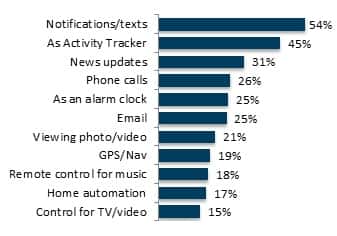