In terms of the main specs, the BLUBOO S8 features a 5.7-inch Sharp HD+ display, which employs an 18:9 aspect ratio. Inside, the BLUBOO S8 comes loaded with 3GB RAM, 32GB internal storage, and is powered by a MediaTek 6750T octa-core processor. On the camera side of things, the BLUBOO S8 comes loaded with a dual rear camera setup, spearheaded by a 16-megapixel camera, and backed up by a 3-megapixel secondary camera. While additional features include expandable storage (up to 256GB), a Zn-Ti alloy frame, USB Type-C connectivity, a 3,450 mAh fast charge-supported battery, and 360 OS. The BLUBOO S8 measures 149.5 mm by 70.6 mm by 8.4 mm, and weighs in at 193 grams. 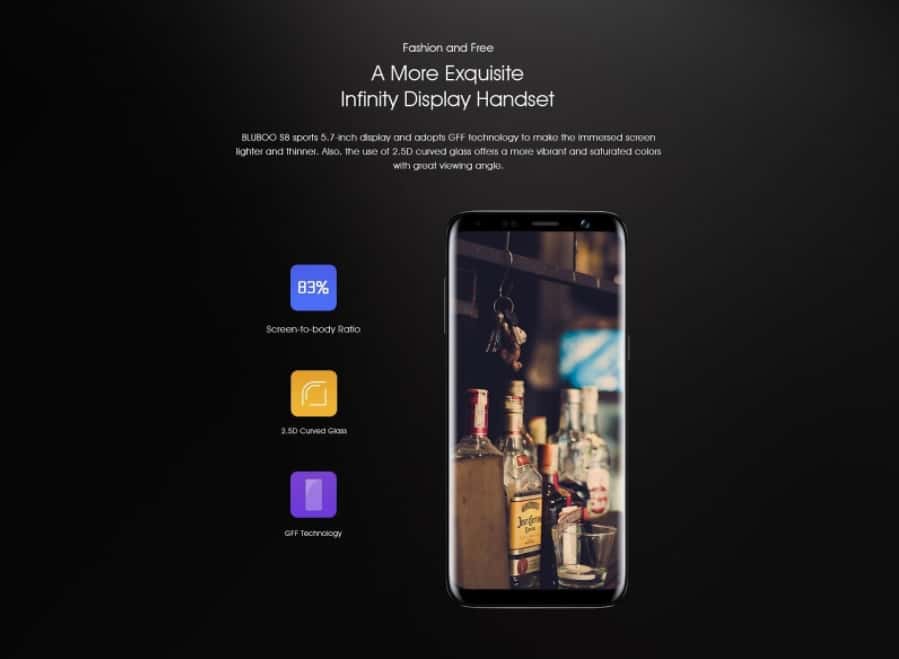 The display on the BLUBOO S8 is one of the device’s clear selling points. As not only is this a larger display coming in at 5.7-inches, but is is also one which makes use of a HD+ (1440 x 720) resolution. Which is largely due to the display adopting an 18:9 aspect ratio, which sees the display taller than usual while remaining slim. Adding to the display qualities is the inclusion of 2.5D curved glass for improved color vibrancy and saturation. A design which had meant that other aspects have had to be relocated. So for example, the fingerprint sensor on the BLUBOO S8 is found on the rear side of the phone, along with the dual camera setup. Back to the screen though, and the BLUBOO S8 makes use of an anti-fingerprint coating which looks to limit fingerprint marks when in use. Which is in addition to the general 10 point touch support that is included for more accurate touch responses. 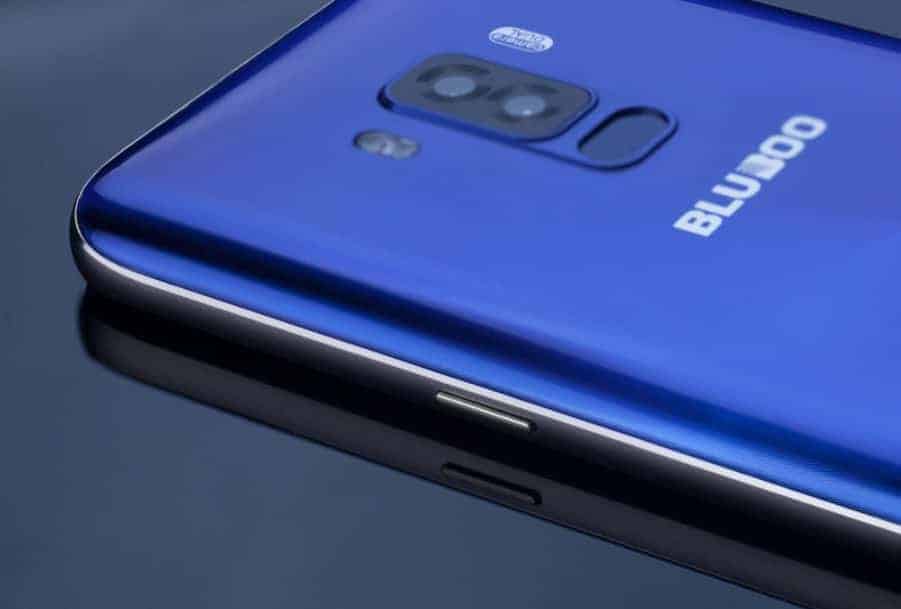 When it comes to the general design of the BLUBOO S8, one aspect that BLUBOO is keen to point out is that this phone was designed using advanced Nano molding craftsmanship. Which essentially means that the metal frame has been constructed in a way that is designed to ensure it fits the rest of the body perfectly. Offering BLUBOO S8 owners a seamless device that is smooth throughout. Likewise, the BLUBOO S8 includes a Zn-Ti alloy frame and back cover which have been both processed using IML electroplating technology. Resulting in both panels equipped with a greater hardness quality and scratch resistance. When it comes to the general aesthetics, one aspect that the BLUBOO S8 has, is a swirling CD-like effect which can be seen on the rear of the device. 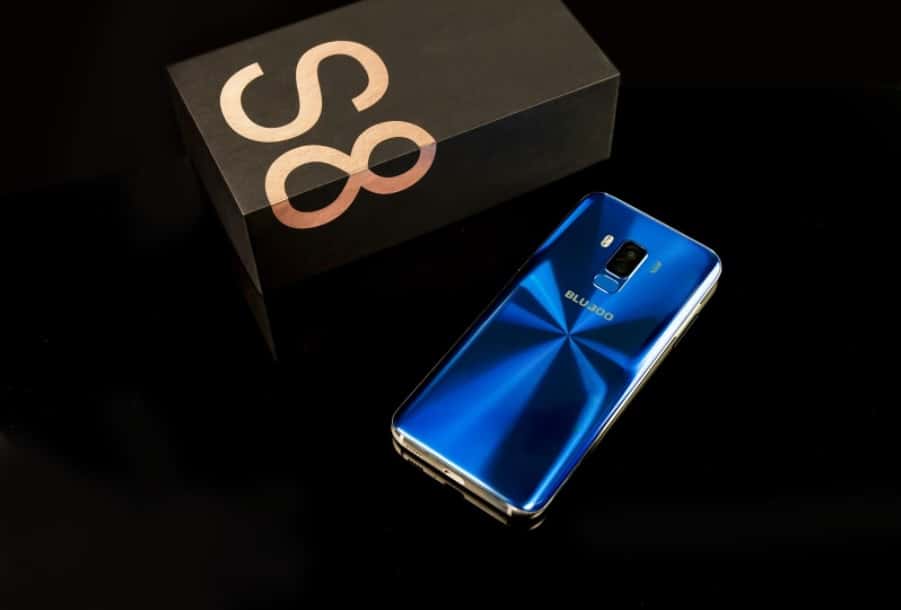 Although the BLUBOO S8 does place much of its focus on its design, it is still a device that looks to perform well when in use. Although one that is relevant to its price point. After all, this is a smartphone priced extremely competitively and one that is more comparable to mid-range smartphones. Therefore, the combination of 3GB RAM, 64GB storage, and a MediaTek MT6750T processor, will look to ensure the BLUBOO S8 competes with other smartphones in this price bracket, if not better out-perform those same devices. According to BLUBOO, the BLUBOO S8 scored 41195 when tested via the AnTuTu benchmark site. 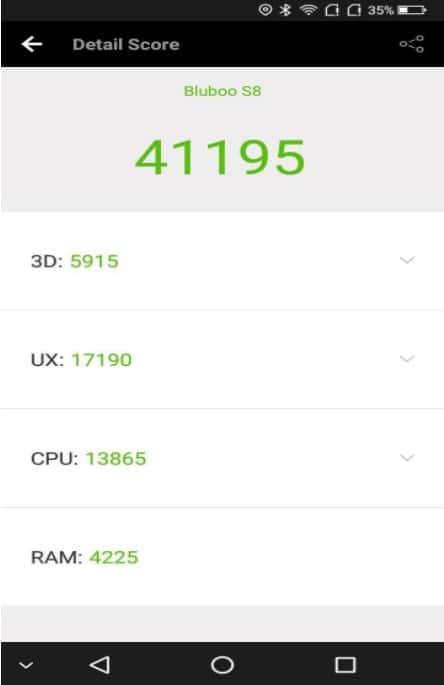 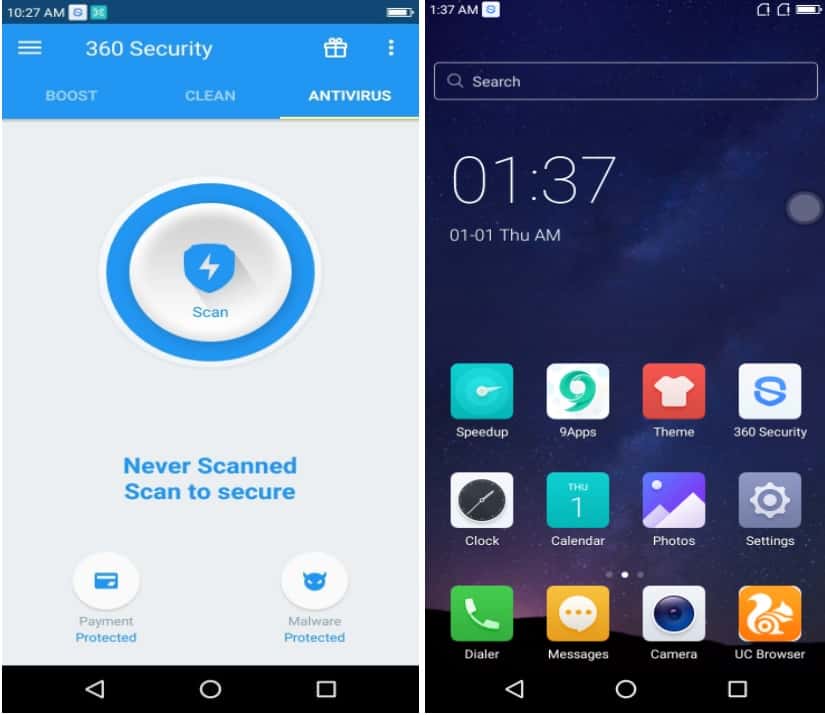 While the BLUBOO S8 comes loaded with Android 7.0 (Nougat) out of the box, it also comes loaded with the company’s own 360 OS software. This is a new software that has been developed by BLUBOO and one which looks to offer BLUBOO S8 users a much more security-focused user experience. One that is more system level-based and less reliant on third-party apps and services. So in addition to providing all the benefits on offer with Android Nougat, BLUBOO S8 users will be able to take advantage of a number of added security benefits through the use 360 OS. 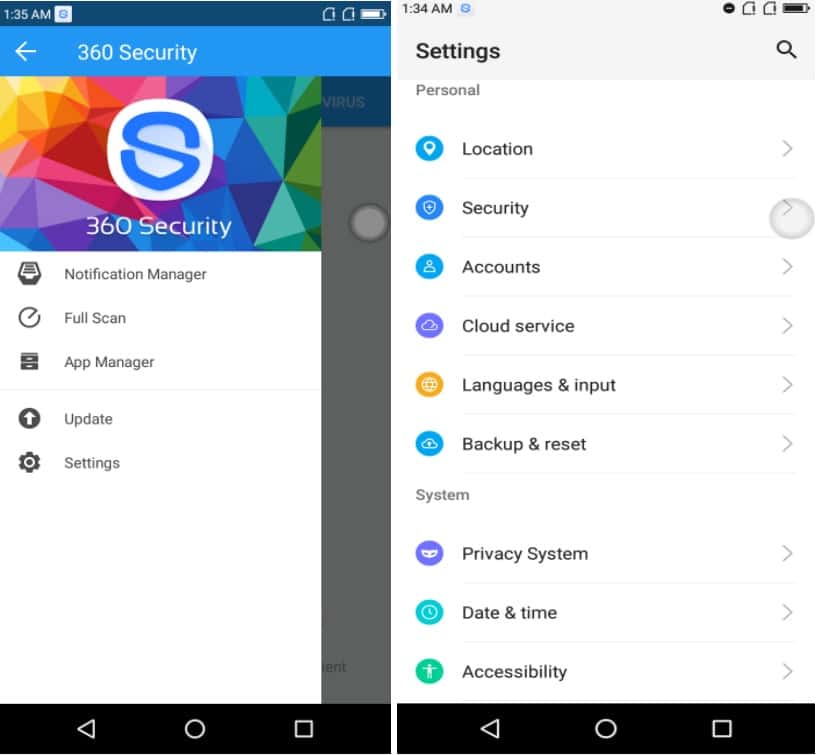 Camera are an important aspect of a smartphone nowadays and the BLUBOO S8 does look to reassure potential buyers can make the most of its camera capabilities. This is best seen through the BLUBOO S8’s inclusion of a dual rear camera setup. This is a feature that many smartphone manufacturers have been turning to recently and the BLUBOO S8 is therefore right on trend with this one. The rear camera duo consists of a 16-megapixel main camera which is helped along by a 3-megapixel secondary camera. The latter of which is designed to pick up additional aspects, such as distance. With the outputted images able to include more depth and greater quality, such as when used to create ‘blur’ effects when taking ‘Portrait mode images. As to be expected, there are a number of standard smartphone photography features thrown in as well. For instance, with the main camera, users can make use of Phase Detection Auto Focus (PDAF) and an f/2.0 aperture. While on the front of the device, users will find a more than adequate 8-megapixel ‘selfie’ camera. 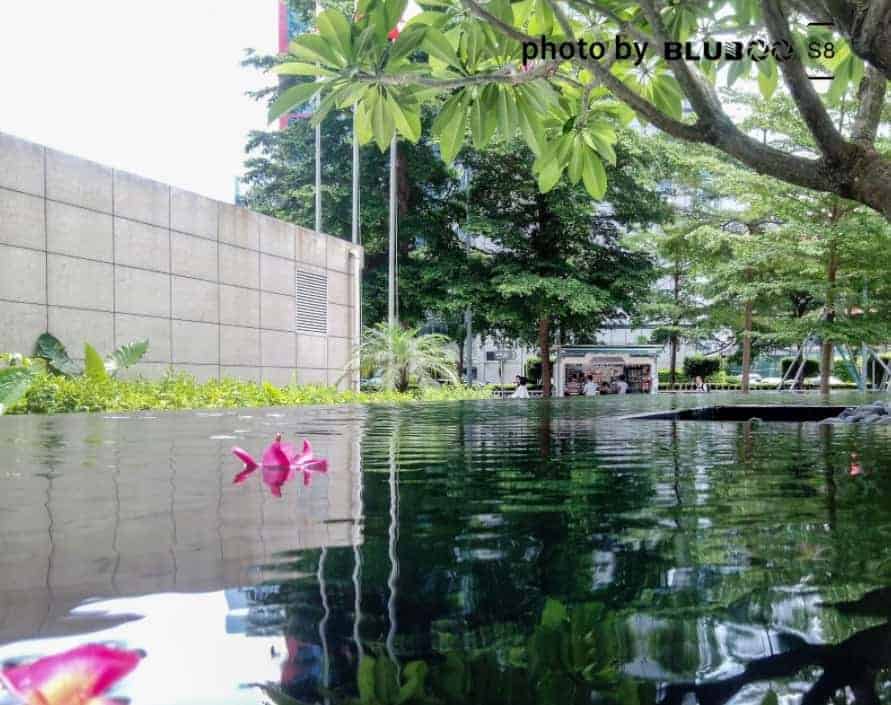 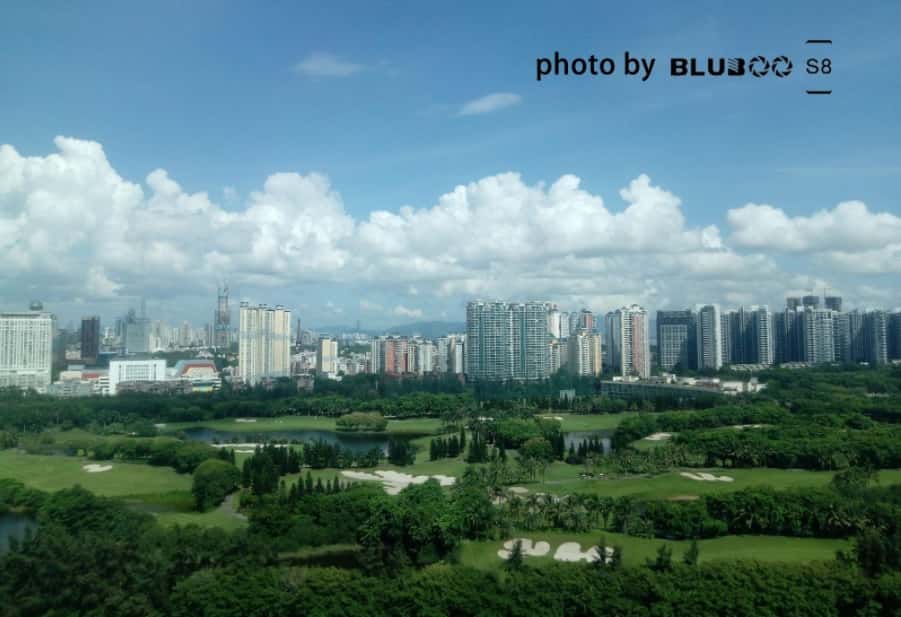 Likewise, when it comes to the battery prowess of the BLUBOO S8, owners are unlikely to be disappointed. As this is a smartphone that employs a 3,450 mAh lithium-ion polymer battery. As well as one which comes with fast charging support. Therefore, the BLUBOO S8 is not only designed to keep working for extended periods of time away from a wall socket, but also replenish the battery quickly, when a wall socket is nearby. 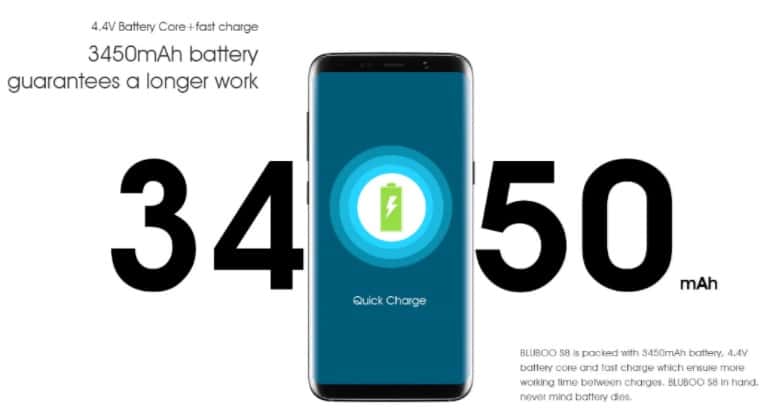 While the design, the display, the cameras, and the battery are headline features, there is also a number of other features that the BLUBOO S8 has going for it. Ones which although lesser in importance do contribute to the overall smartphone experience. One of those is the inclusion of a USB Type-C port which not only allows for faster data transfer, but is also double-sided. So users will no longer have to worry about which way the USB charging cable goes. Likewise the BLUBOO S8 is also a device that includes dual-SIM support. So unless one port is used for expanding the storage, users will be able to add two different SIM cards to the BLUBOO S8. 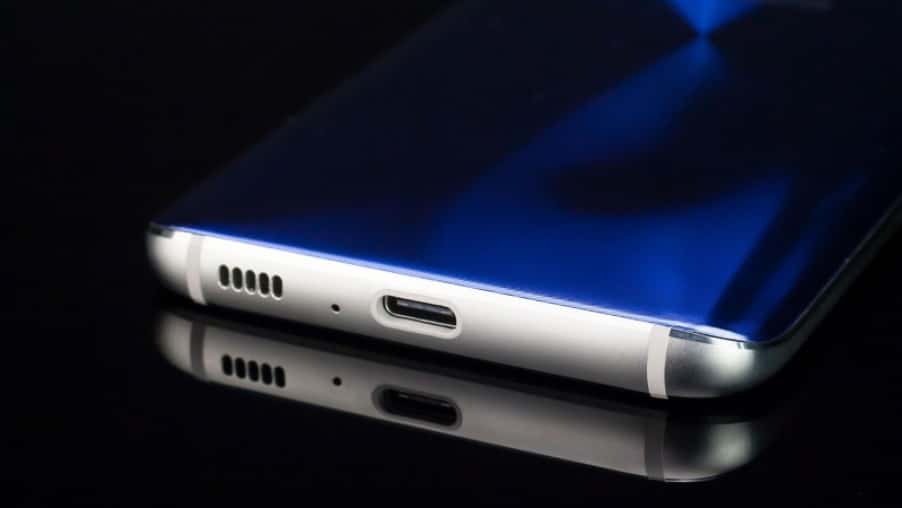 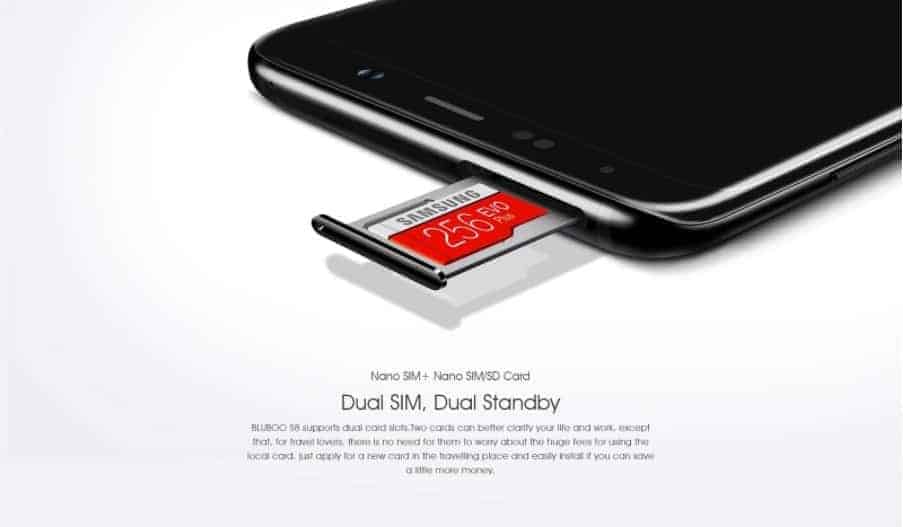 Overall, in spite of this being a mid-range smartphone and one which is priced closer to the budget end of the spectrum, the BLUBOO S8 comes with a number of key selling points and some of which are only currently found on premium smartphones, from premium smartphone brands. For instance, when you take into consideration that the BLUBOO S8 is currently available to pre-order from as low as $149.99, then this makes the features on offer, as well as the phone overall, an attractive purchase.