The ASUS ZenFone 4 Pro looks to be coming with a Qualcomm Snapdragon 835 processor, 6GB of RAM, and 64GB of internal storage space according to some recently leaked specifications details. Alongside these specifications, the phone is also rumored to come with 5.5-inch display that is possibly using an AMOLED panel, along with a Full HD resolution, which might be a surprise as the ZenFone 4 Pro is likely to be ASUS’ high-end device for the ZenFone 4 lineup, and consumers may have expected ASUS to use a Quad HD screen here.

The ZneFone 4 Pro is also rumored to come powered by 3,600mAh battery to keep the device going throughout the day, and of course, it should end up supporting expandable storage on top of the 64GB that is said to be available internally. Rounding out the specs details is Bluetooth 4.2, NFC, Wi-Fi 802.11ac, and Android 7.1 Nougat for the software version, as well as a thickness of 7.6mm. In regards to the software, ASUS had previously and perhaps unintentionally leaked a few ASUS phones on its website, namely the ZenFone 4 Selfie, ZenFone 4 Selfie Pro, and the ZenFone 4 Max, all of which were also listed to come with Android 7.1 Nougat, so it’s not surprising that ASUS may choose to keep the software standard across the entire lineup of devices.

Worth noting is that these are rumored specs for the U.S. model of the device, which makes sense given the Snapdragon 835 processor as many U.S.-based top flagships will be using this chip in 2017. This also means it’s possible the processor could be different for the international model. What’s unclear at the moment is what the ASUS ZenFone 4 Pro will cost and when it will be launched, though considering it’s part of the ZenFone 4 series of phones it’s likely ASUS will at least unveil it at the same time as the other phones. The ZenFone 4 is said to cost €399 in Europe, and although these specs are listed for the U.S. model, the Pro version for Europe is sure to cost more than the standard version of the phone, so it could see a price increase of around €50 or €100 more. Also unclear at this point is what colors the device will come in, and as far as availability when it comes to carriers, but more than likely ASUS will end up launching this as an unlocked device in within the country only, meaning consumers would have to buy it online. 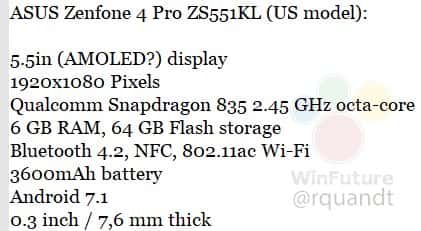