Moving past the current version of Android, and Android 6.0 (Marshmallow) is not necessarily seeing its upward trajectory hampered by the continued rise of Nougat. As Marshmallow is now up to 32.3-percent. Marking an increase of 0.5-percent month over-month, compared to last month’s 31.8-percent figure. Unfortunately, the same cannot be said for the other recent Android versions which all saw a decline month-over-month. The first of the decliners is Android 5.x (Lollipop) which dropped from its previous 30.1-percent standing down to its current 29.2-percent level. Likewise, Android 4.4 (KitKat) dropped down from 17.1-percent to 16-percent. Further back is Android KitKat which dropped down from 8.1-percent to 7.6-percent. With each of its increment versions (4.1.x, 4.2.x, and 4.3) all showing their own month-over-month drops. Ice Cream Sandwich and Gingerbread on the other hand, proved to be no-changers between July and August. As both of which were accredited with a 0.7-percent distribution share in July, and in August both of which occupy a 0.7-percent distribution share.

To sum up, Nougat and Marshmallow continue to rise, Lollipop through to Jelly Bean continue to slip, while ICS and Gingerbread remain as they did last month, after seeing only a very slight drop (0.1-percent) between June and July. While these changes are somewhat steady and predictable at the moment, that is likely to change over the coming months. As Google is preparing to release the final version of Android O soon – likely before the end of August. At which point, Android Nougat will no longer be the most recent version of Android. 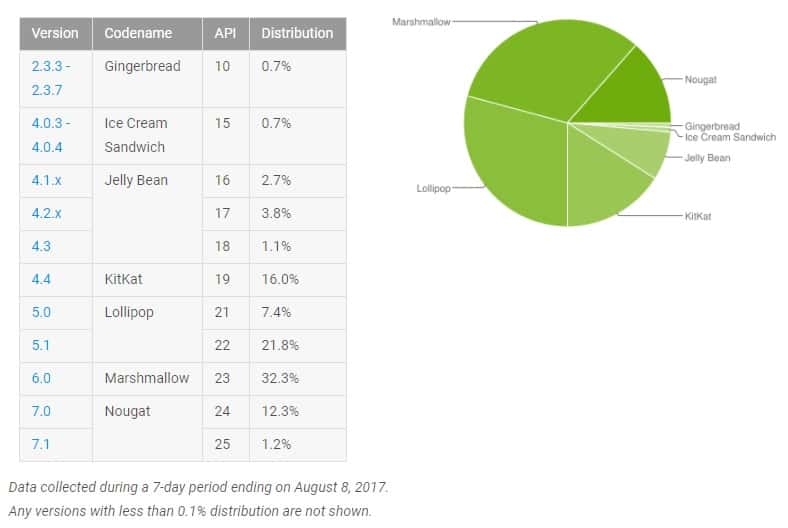