Owners of the Samsung Galaxy A5 (2017) will now experience the new features that the Android 7.0 Nougat brings to their devices. Among them is the native support for split-screen multitasking. While the previous versions of the South Korean manufacturer’s proprietary skin have been capable of viewing two applications at the same time, native support means that a larger selection of apps is now supported. In addition, notifications have been improved by introducing a “Quick Reply” option. This allows people to respond to messages without leaving whatever they are currently doing on their smartphones. Aside from those already included in the Android operating system, the new upgrade also includes improvements on Samsung’s skin. For example, the user interface of the handset will be changed to a more modern look while the settings menu has also been renovated. The Always-On Display, which takes advantage of the AMOLED display to show notifications and other important information, was also made better with the package. Samsung Pass will also be added to the mid-range device, allowing users to access sensitive data through a selection of biometric authentication methods. Some of the supported methods include iris scanning, fingerprint detection, and face recognition.

Since this is a major operating system upgrade, it is important that the installation process takes place once the device is connected to a Wi-Fi network. It is also crucial that there is a sufficient free storage to accommodate the new software since the file size is measured at a little less than 1.4GB. Backing up the device should also be done especially if there are important files and photographs stored in the smartphone. 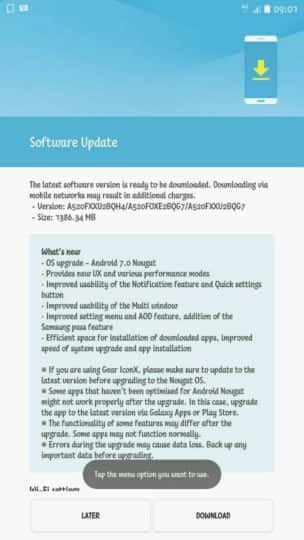