Samsung Electronics is apparently working on a new Galaxy A5 (2017) variant for the Asian market, at least according to a new listing in the database of mobile benchmarking tool Geekbench which was uncovered earlier today. The device identified by the model number “SM-A5300” is said to be called the Galaxy A5 Pro and appears to be equipped with the Qualcomm Snapdragon 660 chipset coupled with 6GB of RAM.

The alleged Samsung Galaxy A5 Pro appears to adopt considerably more powerful hardware components including double the amount of RAM employed by the standard Galaxy A5 (2017) variant introduced at the beginning of the year. In comparison, the ongoing model uses the Exynos 7880 system-on-chip housing eight ARM Cortex-A53 cores clocked at up to 1.9 GHz and 3GB of RAM. The alleged “SM-A5300” also appears to run Android 7.1.1 Nougat out of the box which is to be expected for a device that could theoretically be heading for a market release in the second half of 2017, while the standard variant was launched back in January running Android 6.0.1 Marshmallow. As far as performance in the Geekbench test is concerned, the SM-A5300 seems to be capable of scoring nearly 1,600 points in the single-core benchmark and a little over 5,700 points in the multi-core tests. In contrast, the Galaxy A5 (2017) bearing the model number SM-A520F scores around 800 and 4,500 points in the same tests, respectively.

Whether the SM-A5300 is real or not is unknown, and until more concrete details emerge, there’s no way to be sure of its existence. Technically speaking, benchmark results can be manipulated in more than one way, usually by modifying a single file which the benchmarks use to identify the name of any given device. Nevertheless, if the SM-A5300 is real and headed for the Asian market later this year, then the device is bound to re-emerge in one form or another in the near future. In the meantime, Samsung Electronics is preparing for the release of a new device that’s meant to strengthen its flagship product lineup, with the South Korean original equipment manufacturer (OEM) already confirming that it’s set to officially announce the Galaxy Note 8 on Wednesday, August 23. 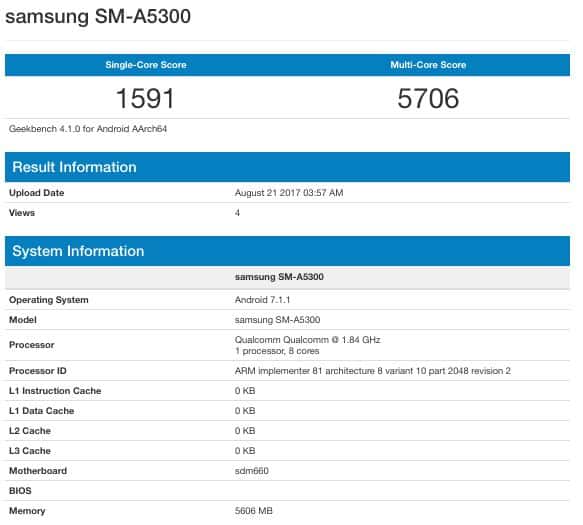