The rumored V0840, ZTE’s upcoming smartphone, has been spotted on popular processor benchmarking site Geekbench, featuring Qualcomm’s mid-tier chipset Snapdragon 425, Android 7.1.1 Nougat with an overlay of ZTE’s custom UI, and 3GB of RAM. It scored 661 points in the single-core category while its multi-core performance has garnered a total points of 1,831. The ZTE V0840 appeared on Geekbench barely a month after it received a certification from TENAA, the Federal Communications Commission’s counterpart in China.

The Geekbench result seems to coincide with the TENAA listing, specifically in the aspect of processor being squeezed into the device, which is clocked at 1.4Ghz and has four cores. To recap, the TENAA listing also reveals that the ZTE V0840 is sporting a 5-inch HD display with a resolution of 1280 x 720. The device will also feature 16GB or 32GB of internal memory that is expandable using a memory card. While its camera specs are not included in the Geekbench results, previous reports indicate the upcoming smartphone will show off an 8-megapixel rear camera and a 5-megapixel selfie shooter. Inside the hood, it will be reportedly juiced up by a 2,500mAh battery, though it is not clear whether that will be a non-removable unit as in the case with newer phones nowadays. Considering the details of the battery based on recent reports, it is safe to conclude that the smartphone will have a smaller battery compared to other modern phones already available in the market.

While details about its launch and availability have yet to surface, it would make sense to assume now that the ZTE V0840’s release is drawing near as the TENAA and Geekbench listings are indications that a device is in the final stages prior to its debut. That means ZTE could now be preparing to finally unveil the long-rumored smartphone anytime soon in China, though the company has yet to officially release details pertaining to other key features of the upcoming device. Nonetheless, the TENAA certification reveals that the phone will come in several color variants such as Dark Night Gray, Glacier Blue, Green and Elegant Gold. An update on the specific launch date for the phone should surface in the coming days. 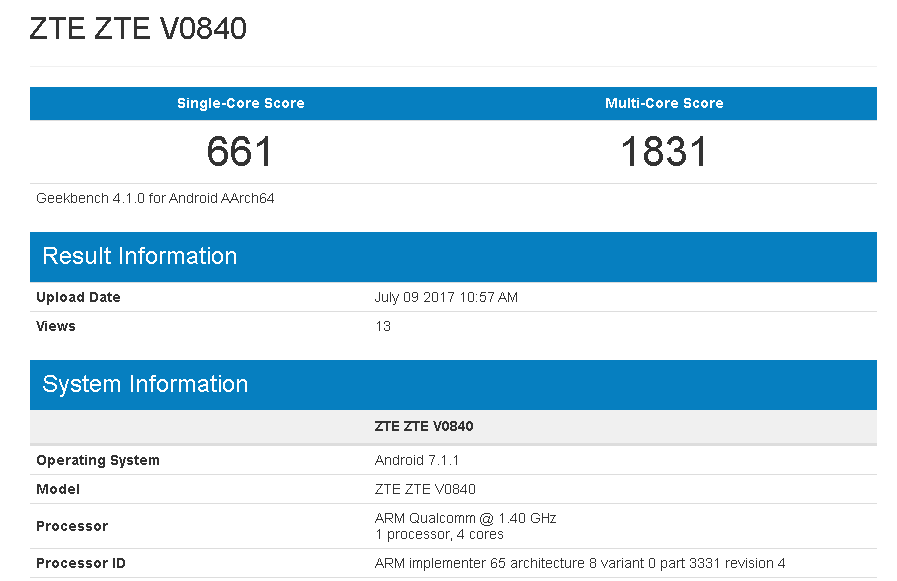