A new Xiaomi smartphone codenamed “Helium” has been recently tested on Primate Labs’ benchmark Geekbench. According to the benchmarking tool, the smartphone is powered by the Qualcomm Snapdragon 617 system-on-chip (SoC) paired with 3GB of RAM and runs the latest version of Google’s mobile operating system, Android 7.1.2 Nougat.

No other specifications have been revealed by Geekbench, but nevertheless, it’s worth noting that the Mi Max launched in 2016 has been referred to as both “Helium” and “Hydrogen” depending on the amount of internal storage, i.e. the variants carrying 64GB and 128GB of onboard memory were identified by the codename Helium, whereas the 32GB model was known as the Hydrogen. However, given the fact that the Mi Max 2 was launched as recently as June 2017 sporting the Qualcomm Snapdragon 625 system-on-chip, it’s rather unlikely for the newly exposed Xiaomi Helium to be the next in line in this series of smartphones. With that being said, it could be that the so-called Xiaomi Helium will bear a different marketing nametag altogether, as well as 64GB of onboard storage or more, which would also imply that the same device could have a “Hydrogen” counterpart housing a lower amount of internal memory. In any case, the Snapdragon 617 SoC was previously employed by devices including the HTC One A9 and the BlackBerry DTEK50, and evidently, it would place the Xiaomi Helium in the same budget-oriented mid-range market segment. The chipset houses eight ARM Cortex-A53 cores arranged in a big.LITTLE heterogeneous architecture, as well as the Adreno 405 GPU, and supports LPDDR3 RAM, Bluetooth 4.1, and LTE Cat.7 connectivity.

As far as synthetic benchmark results are concerned, the Xiaomi Helium managed to score 1,486 points in the Geekbench single-core test, 4,693 points in the multi-core one, and yielded a little over 2,200 points in various memory tests. It remains to be seen when the Xiaomi Helium will be unveiled or at least pushed through more benchmarking websites and regulatory agencies in the immediate future. Untile then, it’s worth noting that the Chinese tech giant is also reportedly working on releasing the Redmi Note 5 and Note 5A soon, as well as the Xiaomi Mi Note 3 which is currently expected to be launched in August 2017. 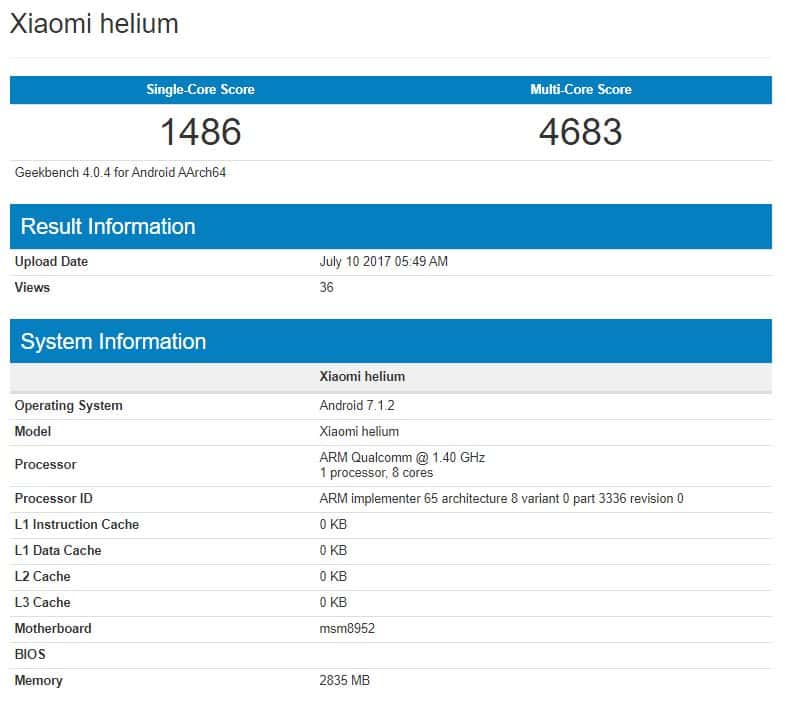