While many people are excited about Google WiFi, there’s another name out there that is doing the same thing, and it’s actually a bit cheaper. And that’s the TP-Link Deco M5. Now TP-Link has been producing routers and other networking products for many years, so it arguably has more experience in this area than Google does, but the Deco M5 is its first foray into a mesh WiFi network. And with WiFi becoming a bigger and bigger deal now, a mesh network is the way to go, especially in larger homes and offices. The Deco M5 comes in a three-pack, although you are able to buy individual ones to add on, and it can cover up to 4200 square-feet. But what’s even more impressive is how easy it is to set up.

Setting up the Deco M5 is pretty simple, You take one of the Deco M5’s and connect it to your modem or wireless gateway – most ISP’s are providing wireless gateways these days. You’ll connect it via the included Ethernet cable and then you’re all set. Now you’ll need to download the Deco app from the Google Play Store (it’s also available on iOS for those with iPhones and iPads). From there, the app will walk you through the entire process, making it super easy. There’s no web-based interface for using the router, everything is done in the app, and with most laptops getting rid of ethernet ports these days, that’s likely a good thing. The app will help you set up the different Deco M5 units around your house to get you the best coverage, and paint your entire home (or office) in WiFi coverage. 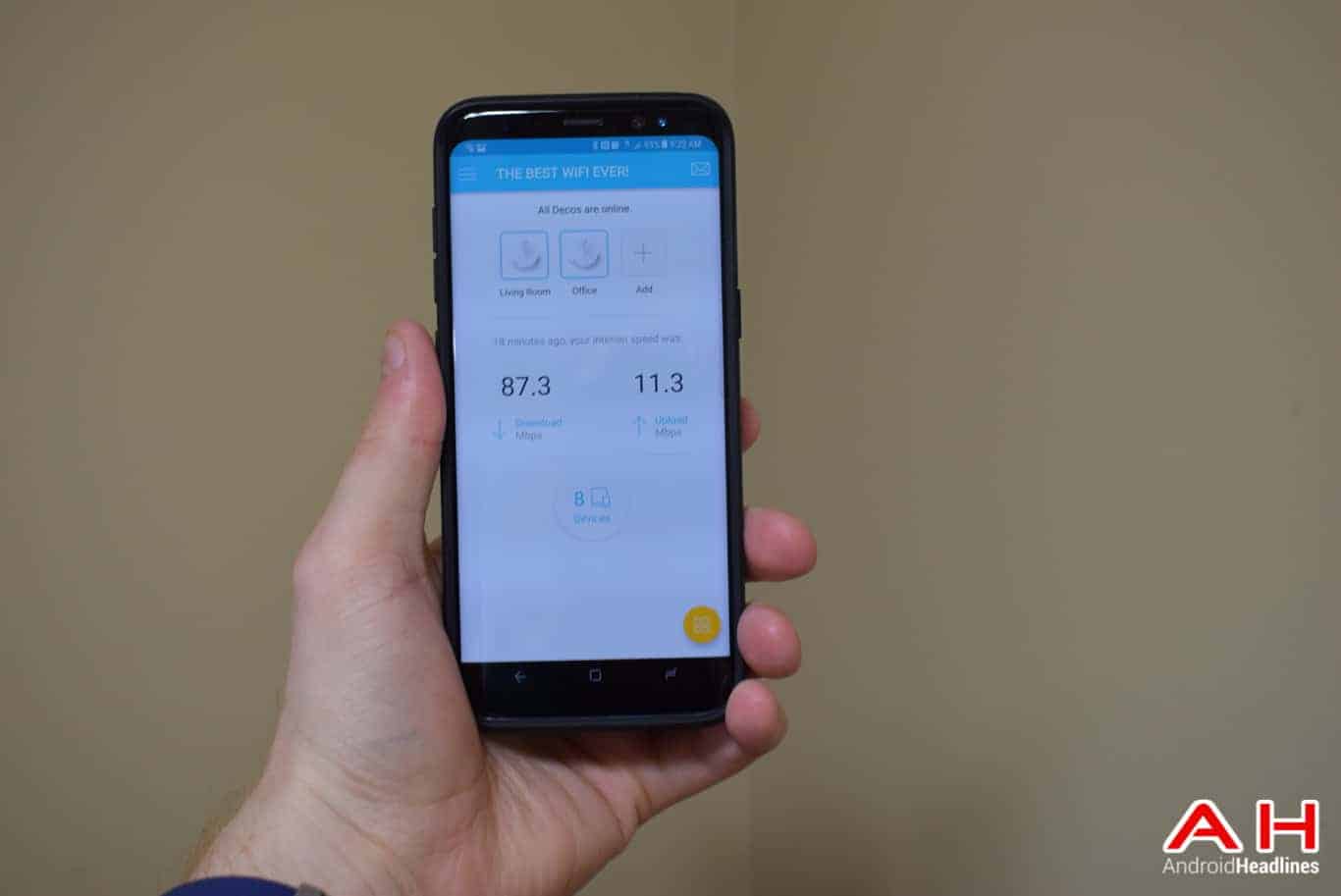 Now for the testing period, I only used two Deco M5’s since I have a one-bedroom apartment, it’s nowhere near 4200 square-feet, which means that all three would be overkill – in fact, having two is a bit overkill as it is. It’s also important to note that the Deco M5 only has a maximum speed of 433Mbps on 802.11 ac, which is a bit of a bummer for those with gigabit internet speeds, but I’m not one of those.[Update: TP-Link has reached out and stated that in 2×2 ac mode it can max out at 867Mbps on 5GHz and 400Mbps on 2.4GHz. And added that the limitation of 433Mbps is likely due to the Deco M5 running in 1×1 ac mode.] I have the 75Mbps down and 12Mbps up package from Comcast, and the speeds surpassed that most of the time. With the Deco M5, you don’t have two networks – one for 2.4GHz and one for 5GHz – it’s actually all in one, and it’ll automatically switch between the two when needed. Which makes things really simple, especially for those that may not be as good with technology as others (read: your parents and/or grandparents).

The only real visual you’ll see with the Deco M5 is the app, and it’s actually a good looking app. It is pretty robust with features, although the one feature I wish it had was the ability to show you how much data each device connected has used. Now it does show you the data that it is currently using, which is pretty nifty, but it doesn’t show you how much it has used over the course of the month. However, the Comcast XFi app does do this, so there’s that. Now there is a rather interesting aspect to this app, and that’s the fact that it shares reports for the previous month. This report shows you which devices spent the most time online, and for June, my top three were my Galaxy S8, MacBook Pro and Chromecast. It also shows your top speed, new connected devices and malicious attacks that were blocked.

The app does show you the speed of your network, but it only updates when you do a new speed test. There is speed test functionality built into the app, which is good as you can quickly see what’s going on if it feels like your network is slowing down. And the numbers here seem to fall in line with what other speed test apps show, so it’s not gaming the system or anything like that. Deco also allows you to prioritize devices over others. So for instance, my MacBook Pro has high priority since I am using that all day long for work and such, and it does indeed need the full bandwidth possible. If you are streaming movies in 4K, you could give high priority to your Chromecast Ultra, or NVIDIA SHIELD TV (or whatever other set-top box you are using) so that you don’t see it buffering at all. You can also set the duration for it being high priority, good for those times you’re watching a movie and want to make sure it doesn’t buffer. You can set it for 1 hour, 2 hours, 4 hours or all the time.

Now, let’s talk about parental controls. With the internet being, well the internet, parental controls are definitely important and TP-Link has taken that into account here. With the Deco app, users are able to set up profiles for their kids, and even other adults on the network, and also adjust what they can and can’t access on the internet. Now the way this works is that you attach the persons device to their profile in the Deco app, so if your kid has a Galaxy Tab S3 and you want to make sure they stay away from certain categories of websites or specific websites, you’ll need to assign that to their profile and then you can go in and adjust what they can and can’t see. Deco takes that a step further as well. Allowing the user to set time limits for using the internet. You can set a daily time limit, and the weekends are separate from the weekdays. You can also set a bed time, so that your child cannot access the internet while they are asleep – or should be asleep. These are some pretty good granular controls on the Deco M5, and good on TP-Link for adding them in.

So now that we’ve talked extensively about the app, let’s actually talk about the design of the router. These are small disc-like routers, that look really plain but also will fit in with just about any decor out there. The back of each Deco M5 router has two ethernet ports and a USB-C port. It’s great to see routers now joining the USB-C fray as well. It’s also good to see two ethernet ports on each of these routers, as it allows me to have a wired connection without being near the modem in the living room. They each have a single light at the top that indicate when something is wrong, but for the most part, they will stay green.

The TP-Link Deco M5 is typically around $299 for a pack of three routers, but they can routinely be found for around $250, making them cheaper than a 3-pack of Google WiFi. And you can buy a single Deco M5 for just $129, also routinely available for around $99. So it’s definitely a good price for what you’re getting here, and it’s super easy to setup. It is unfortunate that the speeds do cap out at 433Mbps on ac networks, but that likely won’t affect many people, since gigabit internet is so scarce right now.