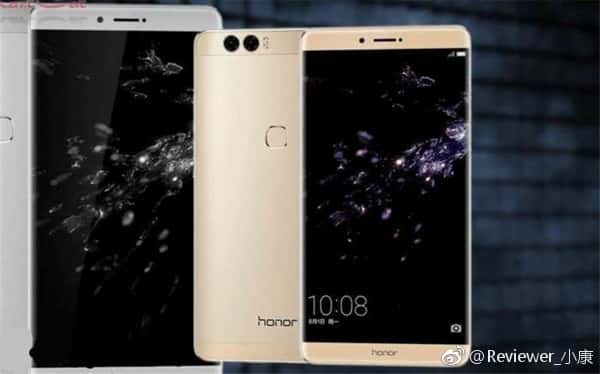 Three new renders depicting what's said to be Huawei's Honor Note 9 leaked online on Monday, having initially been shared by one industry insider from China. The newly uncovered images that can be seen in the gallery below show a device with an edge-to-edge display panel and a relatively slim top and bottom bezel that's largely similar to another supposed sighting of the Honor Note 9 from earlier this month. The handset shown in the renders doesn't have a physical Home button and its top bezel houses a single camera sensor, whereas its rear panel features a dual lens camera setup with a dual-LED (dual tone) flash unit, with the imaging system itself entailing two horizontally arranged sensors located in the top-left corner of the phone's back plate. The fingerprint scanner of the supposed Honor Note 9 is placed approximately one-third of the way down from the top of its rear panel and is centered, with the device depicted in the new renders also featuring Honor's branding on both its front and back side.

The Honor Note 9 initially started leaking online as early as March, and while older sightings of the phablet aren't identical to the more recent ones, it's possible that Huawei's subsidiary had a number of its prototype units leaked, whereas the handset shown below is more in line with the final version of the product. According to previous reports, the Chinese original equipment manufacturer (OEM) is looking to equip the Honor Note 9 with either the Kirin 960 or the unannounced Kirin 970, with the device itself also being set to sport up to 6GB of RAM and at least 32GB of internal flash memory. The Honor Note 9 will likely run some build of Android Nougat out of the box, enhanced with Huawei's Emotion UI, and the smartphone should be updated to Android O by early 2018.

The device is expected to pack a massive 6.6-inch display panel and its dual camera setup is said to consist of two identical 13-megapixel sensors. The front camera module of the Honor Note 9 was previously rumored to be of the 8-megapixel variety, with some industry insiders claiming that the handset's battery will have a capacity of up to 5,000mAh. The Honor Note 9 may launch in late September or early October, around the same time the Huawei-owned phone maker introduced the Honor Note 8 last year.