Sprint will likely launch the BlackBerry KEYone on July 14. The information regarding the device’s launch came from a Sprint employee who posted in carrier’s forums. According to the employee’s post, the carrier will first launch the device through its website starting on Friday, July 14. On July 28, Sprint will release the device on other retail channels, which should include the carrier’s brick-and-mortar stores. This fulfills an earlier statement made by the carrier that it will sell the BlackBerry KEYone within this summer. This announcement also makes Sprint the first carrier to offer the device in the US. For Sprint customers who have been dead set to buy the device from the very beginning, they should go to the carrier’s website on July 14 in order to purchase the device. Otherwise, other consumers could check the device at the nearest Sprint store to get a feel of the handset and decide whether its rather interesting external construction works for them.

Aside from the shipping date of the device, there is no information yet on the pricing of this smartphone. If it is any indication, an unlocked version of the device is currently selling for $549 on Amazon, Best Buy, and BlackBerry’s website. Given the price of the BlackBerry KEYone, it is likely that the carrier may request for an upfront down payment, especially for customers who have yet to establish good credit with the carrier.

The newest device from BlackBerry, and manufactured by Chinese tech company TCL, will appeal to users who consider device security as a key feature when purchasing a smartphone. BlackBerry has been committed to rolling out security patches monthly to its devices, which should protect the user from vulnerability exploits and malware. The BlackBerry KEYone also sports a design that allows it to stand out from competing devices. Considered a rarity among modern phones, the device is equipped with a physical keyboard that supports gesture inputs and programmable shortcuts. In addition, the unique aspect ratio of the device’s 1080p display does not provide the best content consumption or gaming experience but it should be good enough for people looking for productivity-focused smartphones. 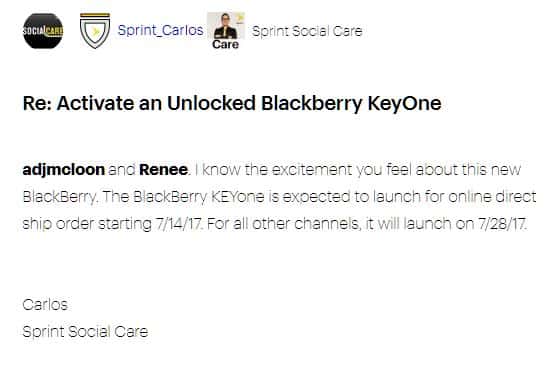