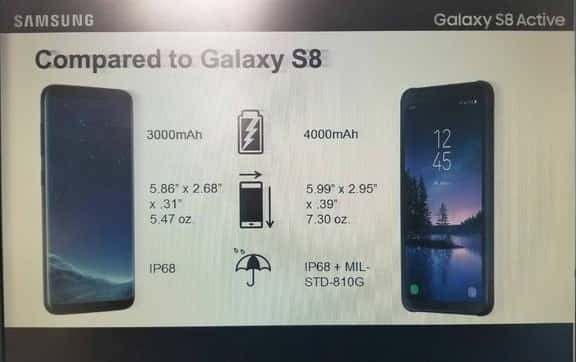 The specifications of the Samsung Galaxy S8 Active have been leaked on the Chinese microblogging site Weibo. The Weibo post includes images of what seem to be promotional materials for the Galaxy S8 Active detailing the upcoming flagship, and the flyers also include a few images of the handset. Like its predecessors, the Galaxy S8 Active has IP68 water and dust resistance certification, though it also boasts the MIL-STD-810G durability rating. The latter certification means that the device can survive extreme temperatures, very high humidity, rain, and transport shock. The promotional materials claim that the metal construction of the Galaxy S8 Active provides the durability it needs to survive in such extreme environments.

While the external construction of the Galaxy S8 Active has been changed to help it withstand extreme environments, most of the internal hardware remains the same compared to the Galaxy S8. The device will still be powered by the Snapdragon 835 system-on-chip (SoC), the latest flagship offering from Qualcomm. The handset is expected to sport a 5.8-inch Super AMOLED display with a resolution of 2960 x 1440 and an aspect ratio of 18.5:9. The screen will be protected against drops and scratches by a sheet of Gorilla Glass 5. The Galaxy S8 Active will include 4GB of RAM and 64GB of internal flash storage, which can be expanded by a microSD card with a capacity of up to 256GB. To keep the lights on, the smartphone will sport a 4,000mAh battery, which is considerably larger than the Galaxy S8's 3,000mAh battery. A 12-megapixel will likely be located at the back of the handset, while its top bezel is expected to house an 8-megapixel sensor with autofocus support.

Software-wise, Samsung's personal assistant Bixby will come pre-installed on the Galaxy S8 Active. Bixby now incorporates the Activity Zone feature which was previously a separate software component in the original Galaxy S8 lineup. The Activity Zone allows the user to quickly access various information like barometer and compass readings, as well as forecasts. The Galaxy S8 Active will ship with Android 7.0 Nougat coupled with a Samsung-developed skin running on top of the operating system. As the device was previously certified by the FCC, its stateside launch may be happening sooner rather than later.