Sony's unannounced Xperia smartphone bearing the model number G8441 appeared in the database of mobile benchmarking tool AnTuTu earlier today, having been listed with a number of high-end specs that put it in the upper mid-range segment of the market. The handset was found to be powered by the Snapdragon 835, Qualcomm's new system-on-chip (SoC) designed for flagship devices and the first silicon from the San Diego, California-based chipmaker that was manufactured on the 10nm process node, thus being extremely energy efficient compared to last year's Snapdragon 820 and Snapdragon 821. The Sony Xperia G8441 was also listed as featuring 4GB of RAM and 32GB of internal flash memory that will likely be expandable via a microSD card slot by up to 256GB.

What makes the smartphone an unlikely contender for a direct successor to the Xperia XZ Premium is its screen definition, with the device apparently only supporting a resolution of 1,280 by 720 pixels. A Sony-made device with the same model number was just spotted in the company's User Agent Profile (UAProf) database on Wednesday, with the relevant code containing references to both 720p and 1080p resolution. Some industry watchers are speculating that the handset will be capable of automatically switching between the two, similar to how the Xperia Z5 Premium and Xperia XZ Premium do. The newly uncovered AnTuTu listing also indicates that the Sony Xperia G8441 is equipped with an 8-megapixel rear camera and an 8-megapixel front sensor, though the former is likely to have a much wider aperture. The device will also apparently run Android 8.0 out of the box with Sony's light software skin that's generally similar to stock Android.

According to this benchmark sighting and a number of earlier reports, it's possible that the newly unveiled device is a "Compact" version of the Xperia XZ Premium and may sport a significantly smaller screen. Sony's one of the only few major original equipment manufacturers (OEMs) in the world that still don't shy away from making smaller yet powerful smartphones and the newly sighted device may be one such product. The Japanese tech giant is expected to announce its new product portfolio in the run-up to this year's IFA Berlin that's scheduled to start on September 1, so more details on the matter should follow shortly. 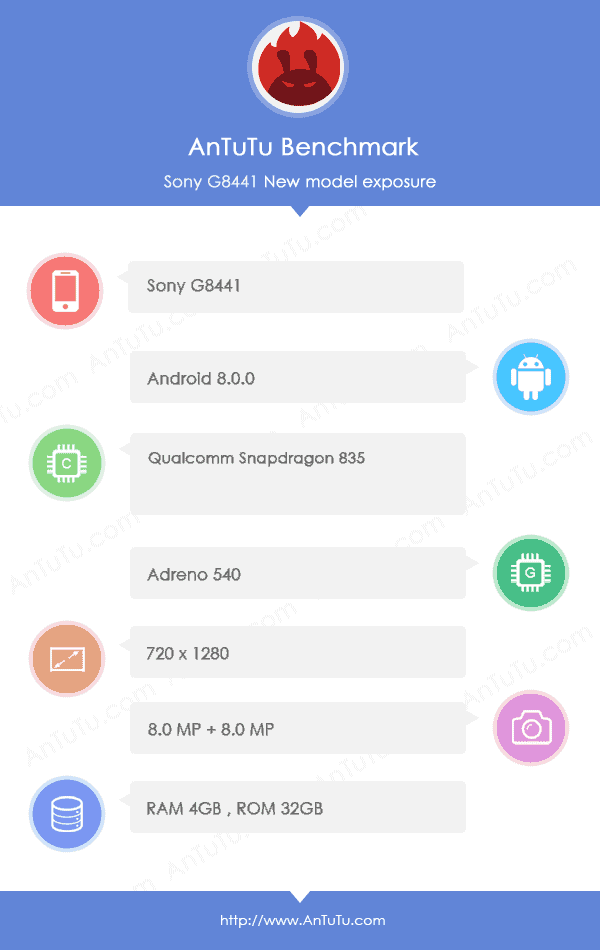