South Korean tech giant Samsung Electronics appears to be developing a new high-end flip phone powered by top-tier internals. The device is currently referred to by the model number “SM-W2018” which virtually makes it a direct sequel to last year’s “SM-W2017.” The new model has reportedly been certified by China’s regulatory agency TENAA a few months ago running the Qualcomm Snapdragon 821 system-on-chip (SoC) coupled with 4GB of RAM, but according to a new tweet originating from a tipster in China, the SM-W2018 flip phone will employ the more recent Qualcomm Snapdragon 835 SoC along with 6GB of RAM and 64GB of internal memory.

Needless to say, these hardware characteristics would make the SM-W2018 the most powerful flip phone to date. As for the question of whether this particular form factor has any appeal to consumers, flip phones have generally maintained some appeal in certain markets, especially in China and South Korea, where Samsung continued to launch such devices over the years, usually under the Galaxy Golden moniker. Furthermore, the company launched the Samsung Galaxy Folder 2 flip phone in South Korea last month for the price equivalent of $260. As for the mysterious SM-W2018 flip phone, additional leaks and rumors suggest that regardless of what Qualcomm Snapdragon chipset it will employ, the smartphone will make use of two 4.2-inch displays, each supporting a resolution of 1920 x 1080 pixels. Furthermore, the device is expected to carry a 12-megapixel main camera coupled with a 5-megapixel front-facing sensor, as well as a 2,300mAh battery.

The Samsung SM-W2017, which should technically be replaced by the SM-W2018, was officially introduced in China in November 2016 running Android 6.0.1 Marshmallow out of the box. The smartphone houses the Qualcomm Snapdragon 820 system-on-chip, 4GB of RAM, and 64GB of native memory. It also uses two 4.2-inch Super AMOLED FullHD displays, a 2,300mAh battery, and a camera setup similar to the one rumored for the sequel. Having said that, the SM-W2018 could retain some of its predecessor’s characteristics – such as the camera, battery, and display setup – while employing updated hardware internals including the newer Snapdragon 835 chipset and more RAM. The new model could also make use of a fingerprint scanner not unlike last year’s variant, and will likely employ a more recent Android OS version. As for the exterior design, not much seems to have been changed compared to the SM-W2017, at least judging by the sketch seen below which was reportedly pulled from the phone’s leaked user manual. 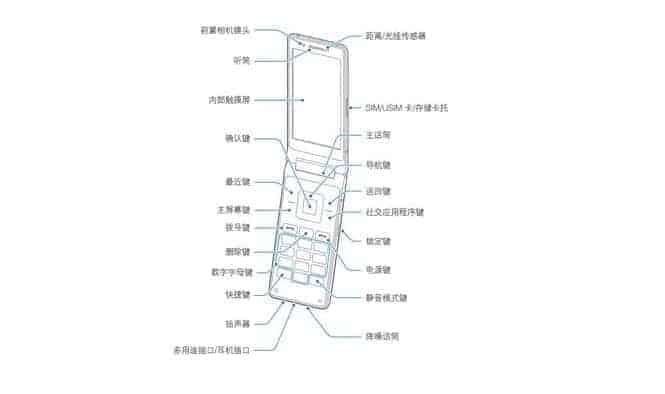