A new Samsung-branded smartphone has just surfaced on Geekbench, and it seems like it will ship with the yet-unannounced Snapdragon 840 processor. The Samsung SM-G9600 is the device in question, and this could be the Galaxy S8 Mini or Galaxy S8 Lite handset, as this is clearly not the Galaxy Note 8. What’s odd here, is the SoC that is listed on Geekbench, the exact model is not mentioned, but the listing says that this is a quad-core processor which runs at 1.77GHz, and its motherboard is marked as ‘sdm840’, which suggests this is the Snapdragon 840 we’re looking at here.

Now, most people would assume that the Snapdragon 840 will be more powerful than the Snapdragon 835, it makes sense, though that won’t be the case if this listing is to be believed. The Snapdragon 840 will probably be just a tweaked version of the Snapdragon 820, though it will probably ship with a better GPU and modem. It is worth noting that this info has not been confirmed by Samsung, or anything of the sort, we’re basing all of this on the info Geekbench provided. Now, in addition to this SoC, Geekbench also says that this phone will pack in 4GB of RAM, and it will ship with Android 7.1.2 Nougat out of the box. It’s also worth noting that this phone managed to score 1,782 points in the single-core, and 4,212 points in the multi-core test on Geekbench, which means that this SoC is quite capable, but it cannot measure up to the Snapdragon 835 in terms of sheer power. 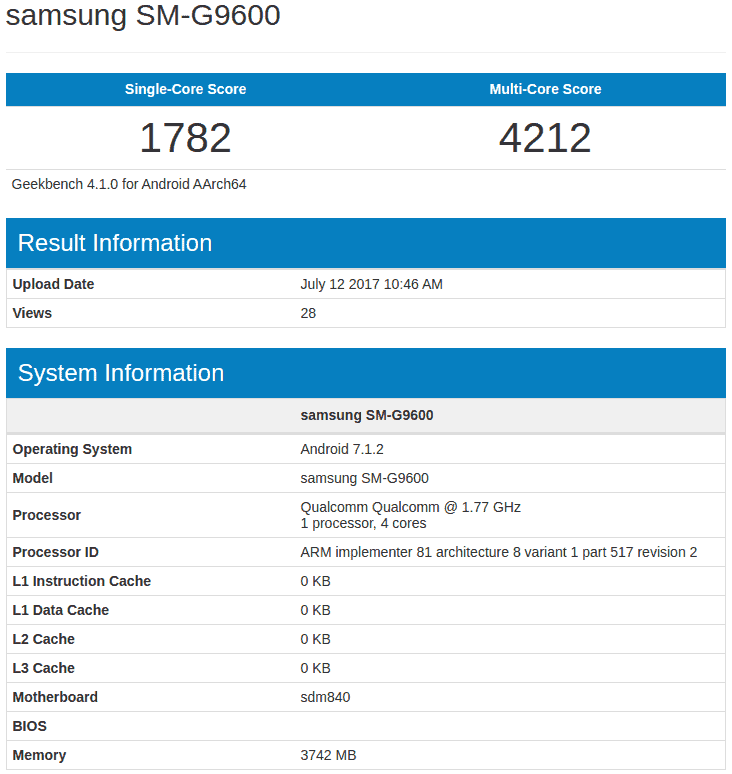