An unannounced Samsung smartphone identified by the model number “SM-A730x” recently passed through GFXBench. Judging by the model number, the device in question could be a sequel in the Samsung Galaxy A7 series intended to be released in 2018, considering the fact that the previous two models launched in 2016 and 2017 were known by the model numbers “SM-A710x” and “SM-A720x,” respectively.

According to the GFXBench listing, the SM-A730x carries an octa-core processor based on ARM Cortex-A53 cores clocked at up to 2.1GHz. The unspecified system-on-chip (SoC) also houses the ARM Mali-G71 GPU, and it’s worth noting that the only Exynos SoC at this time to make use of the aforementioned GPU is the Exynos 8895; the same chipset powering the Samsung Galaxy S8 series in certain regions. However, it should also be noted that the aforementioned chipset is based on four Mongoose CPU cores with a clock rate of 2.3GHz, coupled with four ARM Cortex-A53 cores clocked at up to 1.69GHz. Having said that, it could be that GFXBench picked up on the Mongoose cores frequency while only acknowledging the existence of ARM Cortex-A53 cores. Either that or perhaps the unspecified octa-core unit is another, yet-to-be announced SoC developed by Samsung, which happens to share the same graphics chip as the Exynos 8895. As far as performance in the GFXBench synthetic benchmark is concerned, there’s only one test result available, specifically for Tessellation OpenGL ES 3.1 + AEP, where the device was able to render a total of 792 frames.

Other details mentioned by GFXBench include a display with a resolution of 1920 x 1080, 4GB of RAM, and 32GB of internal storage. The device should also carry a 16-megapixel main camera coupled with a flash, as well as a 16-megapixel front-facing sensor with QHD video recording capabilities. The list of features mentions an NFC chip, Bluetooth and Wi-Fi connectivity, a gyroscope, accelerometer, and pedometer, but there is no word on a fingerprint recognition sensor. Lastly, the smartphone runs Android 7.1.1 Nougat out of the box, presumably covered by Samsung’s proprietary user interface given the mention of “Android Samsung Edition” in the OS (operating system) section. Evidently, there’s no word on the availability of the Galaxy A7 (2018) so far, though it’s likely that the smartphone is at least a few months away from its debut considering the fact that the previous two models have been released in the months of December (2015) and January (2017). 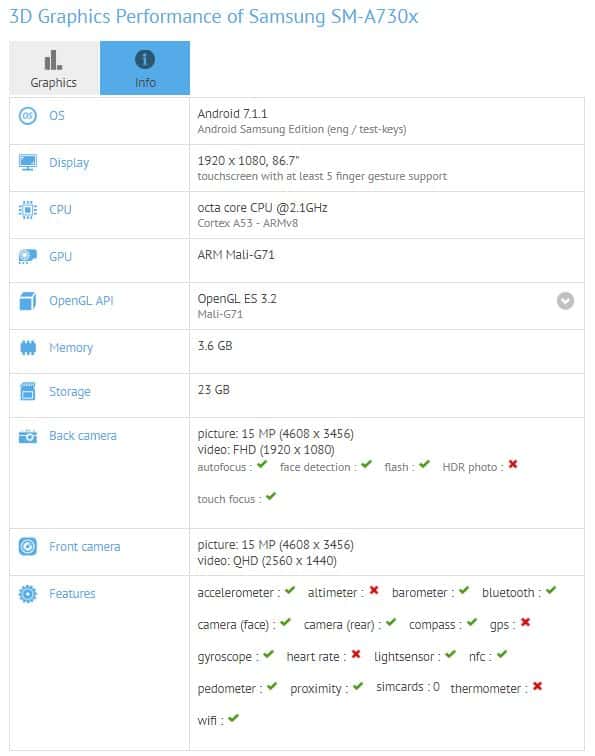