Pokemon GO might soon receive a new update introducing the highly anticipated legendary Pokemon. This bit of information emerged through a new ad shown recently on the iTunes App Store in India, however assuming that the update is on its way then it’s logical to assume that it will eventually land on the Android platform as well, maybe even at the same time as on iOS.

The ad on the iTunes App Store in India reads “Special Pikachu with hat and first legendary Pokemon.” The first part of the quote holds no mysteries given that the special one-year anniversary Pikachu skin wearing Ash’s hat was added in the game last week, so the big news here lies in the ad mentioning the “first” legendary Pokemon, suggesting that these legendary creatures could be added to the world of Pokemon GO in the near future. Niantic’s CEO, John Hanke, had previously confirmed that legendary Pokemon will be added in the augmented reality (AR) game before the end of 2017, and since this is already the month of July, the update should technically be just a few months away at the latest. As yet it’s not entirely clear how Niantic will proceed with implementing legendary Pokemon, but presumably, these creatures might be added to the game gradually and in batches.

Pokemon GO continues to be one of the most popular mobile games in recent years, and Niantic intends on keeping the game updated with new features, some of which have already been added to the game over the past couple of months. This includes the highly anticipated raid battles which seem to enjoy a lot of success, as well as an overhauled gym system. Two additional major features are expected to be added to Pokemon GO before the end of the year, including the ability to trade with other players and do player-versus-player battles. As for Legendary Pokemon, they have been expected for a long while so hopefully, the ad at hand was more of an unofficial teaser rather than an error from Niantic’s part. Assuming that the update is real and on its way, it’s likely that it will first debut on the iTunes App Store considering these recent events, but this doesn’t necessarily mean that the same feature update won’t be introduced on the Android platform in a timely manner. 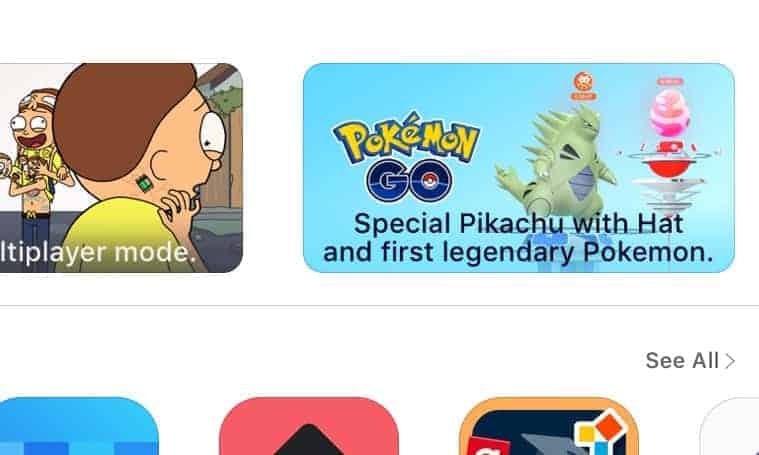