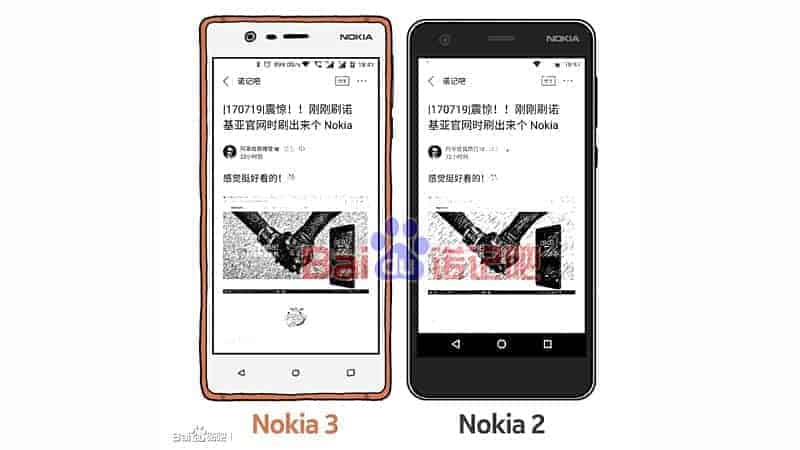 The rumored Nokia 2 is making it into the headlines today thanks to a newly leaked sketch depicting the alleged device next to the Nokia 3. The image emerged from China's Baidu, and the source suggests that the Nokia 2 might share some similarities in design with the now-retired Nokia Lumia 620 which was released in early 2013 running Microsoft's Windows Phone 8 operating system. But of course, that era is well behind the Nokia brand, and the Nokia 2 is expected to run some version of Android out of the box.

The Nokia 2 is supposed to be HMD Global's most affordable Android-powered smartphone expected to hit the shelves before the end of this year. The source behind the recent sketch suggests that the Nokia 2 will likely be powered by the Qualcomm Snapdragon 210 system-on-chip housing four ARM Cortex-A7 CPU cores clocked at up to 1.1GHz and the Adreno 304 graphics chip. Furthermore, judging by this latest sketch, it would appear that the Nokia 2 has a similarly sized display compared to the Nokia 3, which carries a 5-inch panel. There's no word on the number of pixels the panel will accommodate on the Nokia 2, though it's worth noting that the Nokia 3's IPS LCD screen has a resolution of 1280 x 720, and it's safe to say that there's not much room for HMD Global to go any lower than that. Other hardware details remain unknown but the source adds that not unlike the Nokia 3, the Nokia 2 will also lack a fingerprint scanner.

Although there's not a lot of information to go by in regards to what will make the Nokia 2 tick, it's worth noting that the smartphone's existence has been previously confirmed by HMD Global itself. According to a previous statement from the Finnish company, there are three additional Nokia-branded smartphones planned for a market release before the end of 2017, including the Nokia 2, as well as the Nokia 7 and Nokia 8. All three devices will be powered by almost stock Android and should be officially unveiled in the coming months. As for the Nokia 2's price, the device should cost less than the Nokia 3 which launched with a price tag of approximately $150, depending on the territory.